We all have our white whale. For some—call him Ahab—it is a literal whale. For others, it might be someone like Will Venable, who teases with a talent that hints at more.

Venable holds no mystery for me. Like a bug (wait, what happened to our whale?) dissected, I know what I need to know about him as a ballplayer.

Dexter Fowler, being neither whale nor bug, continues to spark my curiosity. He hit two home runs at Petco Park last Friday night. And while the dimensions have been altered at Petco this year to keep fans from falling asleep during games, the ball still doesn't carry well in April and neither of Fowler's blasts was cheap (although the first, to dead center, should have been caught by the aforementioned Venable, who mistimed his jump at the wall).

Of course, there is the matter of the Padres’ pitching staff. Even after a strong start from Tyson Ross (another object of my fascination) on Friday, their starters owned the National League's highest ERA (5.92). Of Fowler's six homers so far, four have come against this staff.

Can he sustain his success against stronger pitching? Fowler appeared to find a new level to his game last season before injuries took their toll. As I noted last June, he hit .282/.378/.506 in 542 plate appearances following his recall from Colorado Springs in July 2011. My conclusion was simple:

Coors Field or not, this is nice production out of a center fielder who is under club control and who should be entering his physical prime.

Fowler continued to play at a high level but saw his newfound power disappear shortly after publication of my article. He homered that day to make me look smarter than I am, but knocked just three more over his final 287 plate appearances. He also hit .315/.400/.419 over that stretch, so it's hard to complain.

We still had nice things to say about him in BP2013:

He has shown the ability to drive baseballs. He is in his prime. Admittedly, his home park helps. Entering the season, 20 of his 28 career homers had come in Denver. But with his second bomb on Friday, which came against former teammate Huston Street and which proved to be the game-winner, Fowler surpassed his single-season career-high in road home runs.

Here's what his road homer totals look like through April 12:

PECOTA pegged Fowler to hit nine homers in 2013, a total he could reach by the end of April. Other projection systems put him in the 10-15 range, which also now seems conservative.

Then again, it's only 10 games. Heck, José Castillo once hit six homers in five games. So on the one hand, Fowler's current run is exciting. On the other, José Castillo.

The real questions are whether Fowler is doing anything differently this year and whether he can sustain his power output for longer than 10 games at a time. Let's see what Fowler has to say:

They're just coming for me right now. I take a deep breath, take everything in, go out there, try to have fun and just play.

Uh, I don't know if that represents a shift in approach. More from Fowler:

I just go out and try to put a good swing on it and let it do what it do.

I just want to go out and have fun. That's the key thing.

This sounds more like steps toward achieving satori than increasing one's power output, but maybe the two are related. I mean, really, isn't everything related?

I know the league. I know the pitchers so much better. You get a much better idea of how they are trying to attack you. That's helped. Plus, I have an aggressive mind-set. No waiting around. Let's go.

In other words, experience and aggression. Makes sense. Well, assuming the levels of aggression are within a certain range. I can't define that range, but I know Jeff Francoeur when I see him.

He has added a leg kick that has created power. He gets his hands in a position that produce a consistent swing path. Better mechanics have produced better pitch recognition.

And this is the mechanical yang to the attitudinal yin. It's also something I suspected when discussing Fowler last June:

He has become a very dangerous hitter when hitting balls in the air. I don't know why, although improved strength and/or mechanics would be a good place to start looking.

A couple of readers—Jim Humdingding and bluesman98—also commented that Fowler began working out with Troy Tulowitzki and Jason Giambi before last season. A February 2012 Denver Post article lends further support to the “improved strength” angle, noting that “by the time he arrived in training camp, he was lifting as much weight as Tulowitzki” and offering this quote from Fowler:

I feel stronger in my legs and my shoulders. I can tell that the ball is jumping off the bat a little more.

What someone says and what someone does aren't always the same thing, but Fowler backed up his words by hitting baseballs hard.

Eno Sarris at FanGraphs offers another clue in the mystery that is Fowler, noting that he hasn't always been a switch-hitter and that maybe he needed time to learn how to maintain two swings. Fowler said of batting left-handed that “I could always hit the ball, but the mechanics weren’t quite there.”

Fast-forward, and the story changes:

It feels natural to me now. It doesn’t really matter which hand I hit with, right-handed or left-handed, I feel comfortable.

As Sarris notes, the numbers support Fowler's assertion. All six of his home runs this year have come while batting left-handed. As recently as 2011, Fowler hit just four from that side.

There is a difference between fending off pitches and being able to drive them. Using Fowler's own word choices, it is easier to “have an aggressive mind-set” when one “feels comfortable.” We touched on this in last June's article on Fowler, but it's worth another look, from a slightly different angle (instead of OPS, we'll focus on ISO since we're interested in how well he's driving the ball):

The shift in splits occurred in 2010, but notice how his ISO has risen from both sides of the plate in the ensuing seasons. The narrative would read something like this: He started out weaker from the left side, improved at the expense of his right-side numbers, then made incremental gains from both sides. If that isn't development, I don't know what is.

Related to this, in last June's article, reader SaberTJ asked: “Is Fowler pulling the ball more often? Is he more successful handling the fastball inside?” In other words, had he made any adjustments?

The biggest difference is that Fowler now crushes pitches out over the plate, when he has a chance to extend his stronger arms, especially from the left side. Compare his ISO vs. RHP in 2011 (top) to the same in 2012 (bottom): 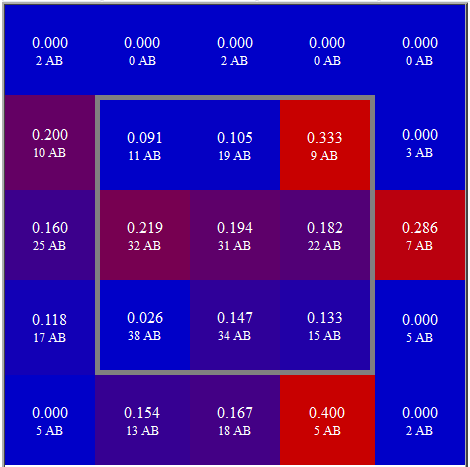 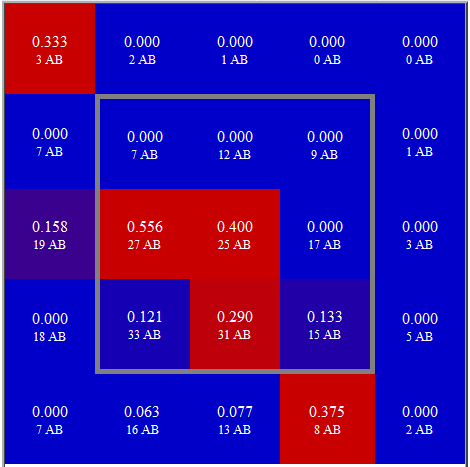 These are small samples, but the four squares at the bottom left (outside) of the strike zone tell an interesting story. I've added data from previous seasons that aren't included in the above charts (you can play with the charts here if you'd like):

Reach out and touch someone, Dexter Fowler. Pitchers used to get away with mistakes to him when he was batting left-handed. If they do that now, he punishes them for it. He also showed improvement from the right side on pitches in the middle horizontally, i.e., mistakes.

This is the change in Fowler's approach. He isn't drawing more walks (he already drew plenty) and isn't making better contact. What he is doing is abusing hittable pitches. He is generating more loft and hitting the ball with greater authority now than earlier in his career:

The sample in the bottom row is much smaller than the sample in the top, but given what we know about Fowler (his age, his comfort batting left-handed, his improved mechanics and strength), it isn't a stretch to believe that he now owns these skills. He has added the ability to hit the ball hard and far to his repertoire.

Is what Fowler is doing now real? I doubt he'll make a habit of hitting six homers in 10 games, but it seems likely that the levels he established in the first half of 2012 are a reasonable baseline in the short- and medium-term.

Either that, or I am as blind to Fowler's weaknesses as others are to those of, say, Venable or a particular whale. But I choose to ignore this possibility. And don't call me Ahab.

(Half a billion points for guessing the reference)
Reply to tnt9357