If, like me, you switched to Cardinals-Diamondbacks after the end of Yu Darvish’s almost-perfect game against the Astros on Tuesday night, you were immediately treated to the sight of something almost as interesting:

We’re about 0.8 percent of the way through the season, but that sixth-inning game-winner hit by Matt Holliday was one of the strangest home runs you’ll see this year. There are a few reasons why the pitch Holliday hit out of Chase Field was so unlikely to lead to a homer:

1. It was low. Really low.
This is where that pitch was at (more or less) the moment when Holliday hit it: 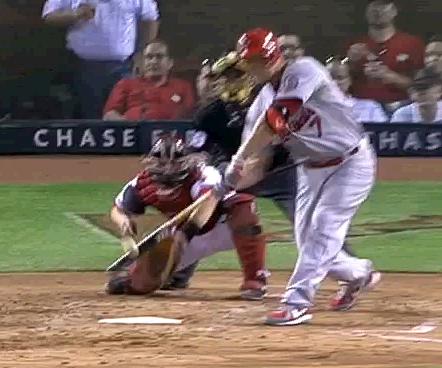 The ball was 1.05 feet off the ground when it crossed the front of home plate. Only one pitch lower than that was hit for a home run last season, a slider 0.96 feet high (thrown to Delmon Young, naturally). And Matt Holliday is 6'4", so the pitch was lower relative to him than it would have been to most batters.

2. It was a sinker.
Sinkers aren’t often hit for home runs. In fact, that’s sort of the point of the sinker. Prior to last night, no pitch that low classified as a sinker by PITCHf/x had ever been hit for a home run.

*Update* Never mind the bit about it being a sinker. Here's what Cahill said:

It was a changeup that I tried to throw low, and I got it low. He’s just a really, really strong person. I didn’t even want to look at it (on tape). Some of the guys said it was pretty impressive that he was able to get it out.

I agree with the guys! Changeups are hit for home runs more often than sinkers, so that makes this a little less weird, but not by much. Only two lower pitches classified as changeups by PITCHf/x have been hit for home runs, one in 2011 and one in 2009.

3. It was thrown by Trevor Cahill.
Trevor Cahill had the highest groundball rate (63.0 percent) of any qualifying pitcher last season. As you might expect, he didn’t allow many home runs (16 in 200 innings). According to our PITCHf/x leaderboards, 252 pitchers threw at least 200 pitches last season. Of those 148, Cahill had the 14th-lowest FB/BIP rate, 20 percent (although his changeup wasn't particularly good at inducing grounders).

So immediately after the excitement of Darvish’s domination, we saw a low-percentage homer hit off an extremely low pitch thrown by a pitcher who doesn’t give up fly balls. I don’t know if we learned anything, since we already knew that baseball is hard to predict and that Matt Holliday is strong and good at hitting home runs. But it was a helpful reminder that baseball never makes us wait long for the next nice surprise.

You need to be logged in to comment. Login or Subscribe
ragerd
Wait. "No pitch that low classified as a sinker by PITCHf/x had ever been hit for a home run."? Need more information!
Reply to ragerd
bornyank1
What information do you need?
Reply to bornyank1
ragerd
Would be cool to see the most extreme pitches that ended up as home runs, and maybe the most common pitches that ended up as HR's that we wouldn't expect.
Reply to ragerd
SixToolPlayer
FanGraphs ran a series on most extreme home runs at the end of last year.
http://www.fangraphs.com/blogs/index.php/the-2012-season-in-outside-home-runs/
http://www.fangraphs.com/blogs/index.php/the-2012-season-in-high-home-runs/
http://www.fangraphs.com/blogs/index.php/the-2012-season-in-inside-home-runs/
http://www.fangraphs.com/blogs/index.php/the-2012-season-in-low-home-runs/
Reply to SixToolPlayer
SixToolPlayer
Baseball is a funny game.
Reply to SixToolPlayer
warpigs
Really fun article. Does PITCHf/x make it easy to find out the next lowest pitch classified as a sinker that had been hit for a home run?
Reply to warpigs
bornyank1
According to PITCHf/x, it was this, which was about an inch higher: http://arizona.diamondbacks.mlb.com/video/play.jsp?content_id=12437805&c_id=mlb. Pennington's listed height is six inches shorter than Holliday's, so it doesn't look quite as extreme.
Reply to bornyank1
Schere
an 80 MPH sinker? I don't think so.
Reply to Schere
Schere
see how Holliday is out on his front foot a little, too? It's a change up, I think.
Reply to Schere
bornyank1
You're right, I think--I was paying more attention to the height and the Gameday classification than the velo. I'll update the post. That would make it the third-lowest changeup hit for a home run in the PITCHf/x era.
Reply to bornyank1
bornyank1
Updated, also with a quote by Cahill.
Reply to bornyank1
Schere
cool!
Reply to Schere