It's that time of the year again, when Opening Day rosters bring a number of new names to the forefront.  Let's take a look at 10 players that you'll be hearing from in the coming days.

Burke pitched in the majors in 2009 for the Padres. He's changed a lot since then. He doesn't throw in the low-to-mid-90s anymore for one thing. Oh, and he overhauled his mechanics and dropped his arm slot down from three-quarters to sidearm. Expect him to give righties fits. 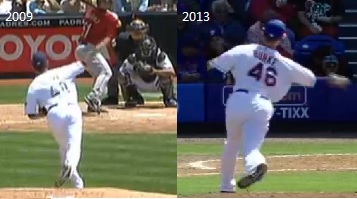 Milwaukee breaks camp with Davis in order to have a right-handed pinch-hitting option available to manager Ron Roenicke. Davis will have to learn how to come off a bench in a hurry because it could be vital to his long-term prospects. His best fit defensively is left field, as he is a below average runner with a below average arm, but the Brewers already have Ryan Braun in place. Davis' size (listed at 6-foot-nothing) would make him one of the shorter first basemen in the league. He doesn't have the bat to overcome those limitations, either, though he does have a solid eye and some pop thanks to a long swing.

Fun fact: Figaro is Fernando Rodney's cousin. After spending the past two seasons overseas, Figaro caught the eye of the Brewers organization in winter ball. The reedy right-hander has always thrown in the low-to-mid-90s with a nice slider, but improvements to his mechanics could be the difference between a pair of unsuccessful stints with the Tigers and a chance at a better spin with the Brewers.

Gattis marries an atypical back story with an unusual swing for a player with plus-plus raw power. He's a minimalist: no batting gloves, no exaggerated load, no leg lift. Just a few toe taps and a strong, compact swing. His hands are strong and allow him to adjust to breaking pitches in addition to generating good bat speed. Still there are questions about how the over-age prospect will take to big-league pitching, and how well he'll be able to defend behind the plate. He figures to stick on the roster until Brian McCann returns. Perhaps longer if he hits.

Inciarte, a Rule 5 pick from the Diamondbacks, has not played above A-ball. Yet here he is, on the Phillies Opening Day roster as a reserve outfielder. Inciarte is a fast runner and good defender with contact tendencies. He doesn't have strength in his swing or frame, and it's doubtful he'll develop enough secondary skills at the plate to become more than a fourth outfielder. Still, Inciarte has done a nice job beating the odds by hanging around so far.

On the squad thanks to injuries and a barren trade market. Jason Parks named Marte a Factor on the Farm for the Diamondbacks in January:

While not a household name. Alfredo Marte took a very big step forward in 2012, and positioned himself for a possible major league taste in 2013. He swings a good stick and shows above-average raw power, and despite a limited defensive profile, has the athleticism and the arm to handle a corner spot.

Despite being a first-round pick in 2007, Noonan wasn't supposed to make the Giants. He was optioned to the minors halfway through March, but the Giants brought him back after releasing Wilson Valdez and demoting Kensuke Tanaka. Noonan has fringy defense on the left side, and his bad approach at the plate limits his offensive production and prevents him from making the most of his good speed.

Another Rule 5 pick, Pressly hails from the Red Sox organization. Our own Mark Anderson called Pressly the pick most likely to stick back in December. His reasoning:

I had extensive exposure to Pressly in 2011 and 2012, and while I liked him as a starter, his move to the bullpen has been a boon for his career. Pressly offers the Twins an arm that could still be a back of the rotation piece or a solid seventh/eighth-inning reliever. In the bullpen, his fastball, cutter, and curveball can all play immediately, and he should have a role on a Twins team that is rebuilding.

Rice was the 44th-overall selection in the 1999 draft. He's been pitching in some form or another of the minors ever since, racking up 480 minor-league appearances. The Mets are carrying him in order to have a second lefty in the bullpen, a move that comes at the expense of Pedro Feliciano. Rice isn't your typical left-handed minor-league journeyman in that there's not a lot of smoke and mirrors. He throws a sinker in the upper 80s from a three-quarters release point and generates a lot of groundballs. Look for him to do most of his damage against left-handers.

Willie Bloomquist's injury opened the door for Wilson, one of the few players on this list with previous big-league experience. In fact, he has more service time (four years and 31 days) than those familiar with him would expect. Wilson combines a solid glove with good baseball instincts. His bat doesn't play in the majors, however, and has prevented him from laying claim to a permanent big-league job.

You need to be logged in to comment. Login or Subscribe
swarmee
Wow, Scott Rice: 13 years in the minors and finally gets "the call." Nice note.
Reply to swarmee
Shankly
Shows that you never can tell and to persevere.
Reply to Shankly
anderson721
And Rice had quite the debut today.
Reply to anderson721