You might not think it’s particularly important for a team to have a dominant closer, or even to have a defined one. But Tigers manager Jim Leyland definitely does. Two months ago, he told The Detroit News, “I totally disagree with people who don’t think you need a closer to win. Most teams that win have a truly dominant closer.”

So Leyland probably isn’t pleased that his team is without an established closer as Opening Day draws near. Prospect Bruce Rondon was presumed to be the favorite for the job entering spring training, but the 22-year-old, who walked over four batters per nine innings in the minor leagues last season, walked nine in 12.1 Grapefruit League innings, which removed him from closer consideration. (To be fair, he also struck out 19.)

With Rondon headed to Toledo, Detroit is stuck with a classic closer-by-committee. Here’s Dave Dombrowski, again from The Detroit News, this time today:

“It's what we said all along," said Dombrowski. "There will be a guy out there in the ninth inning who will close games for us. We might not have a closer anointed, but we have guys we're comfortable with that can close games.

He’ll be mixing and matching with candidates including Octavio Dotel, Phil Coke, Joaquin Benoit, Al Alburquerque and Brayan Villarreal. There are some pretty good pitchers in that group, but despite what Dombrowski says, Leyland clearly isn’t completely comfortable with the idea that all of those guys can close games consistently.

At TigerFest in late January, Leyland expressed reservations about the closing capabilities of Dotel, Coke, and Benoit. His qualms about Dotel and Coke seemed to be based at least in part on makeup concerns that we can’t really put to the test. But about Benoit, Leyland said, “Joaquin Benoit physically, I don't think he can do it. With all due respect to Benoit, he doesn't bounce back.”

That we can check. Here are Benoit’s career relief splits by days of rest:

If anything, Benoit has actually been at his best when pitching on back-to-back days, on the whole. But he had rotator cuff surgery in 2009, and he’ll turn 36 in July. He’s been more effective, with better peripherals, since the surgery than he was before it, but it’s conceivable that he could have lost some bounceback ability to injury and age. Here are the same splits for 2010-12, Benoit’s post-surgery seasons:

Since the surgery, Benoit has been better on zero and one days of rest than he was prior to 2009, but much better with two and three days of rest than he was prior to 2009. Does that mean anything? Well, maybe; we’re talking about tiny samples here, so it’s hard to say. The strongest evidence in support of Leyland’s statement is Benoit’s performance with zero days of rest last season: a 4.50 ERA in 22 innings. But Benoit also struck out 27 batters in those innings—a higher K rate than he recorded with any other amount of rest—and had a .315 BABIP, which is quite high for him. Maybe he was less effective, and Leyland is right, or maybe he was just a little unlucky, and Leyland is overreacting to a recent small-sample fluke. The bulk of Benoit’s career (including his 2011 with the Tigers, when he had a 1.46 ERA with a 5.0 K/BB in zero-rest situations) suggests that he’s perfectly effective when pitching on back-to-back days.

Is there any sign of degradation in Benoit’s stuff when he’s asked to come back quickly? With the help of Harry Pavlidis, I looked at Benoit’s weighted average velocity by days of rest over the past two seasons, both of which he spent in Detroit under Leyland. Here’s 2011-12: 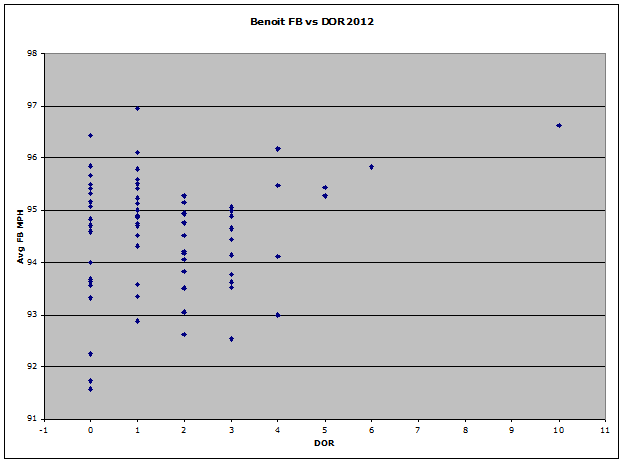 I can’t vouch for Benoit’s closer mentality (though I would point out that he’s historically pitched better in save situations than non-save situations), but there doesn’t seem to be any conclusive evidence in his stats or stuff to suggest that he physically couldn’t close. We know Leyland hates having a committee, so he’s bound to elevate one of his setup men soon. PECOTA says Benoit would be the best of the bunch, but PECOTA might be missing something.

We often hear about how much more managers know about their players than we do; maybe this is an instance of an experienced skipper perceiving something in a small sample that outside observers can’t see and statistics can’t prove. And for all we know, Benoit, Dombrowski, or Detroit's doctors and trainers have told Leyland that Benoit can't pitch on back-to-back-to-days, so as not to endanger his already repaired arm. That would explain why he's done so only once in each of the past two seasons, while Jose Valverde did it 10 times (including one string of four consecutive days) in 2012 alone. We're working with less information than the Tigers, so it's probably best to give them the benefit of the doubt. Whatever we're missing, Leyland's bullpen decisions, and his usage of Benoit, bear watching.

Thanks to Tommy Rancel for tipping me off to Leyland’s remark about Benoit.

I appreciate the respect and deference shown to Leyland. But isn't it just possible that he's got a mental label on Benoit and isn't able to shake it?
Reply to leleutd
bornyank1
Yes, it's possible.
Reply to bornyank1
flyingdutchman
It's more than possible. It's very probable. I am a Tigers fan, and Jim Leyland is a fine man, but he might not be the best critical thinker out there. I love him anyway, but it's no surprise that he didn't check the data before formulating his opinion on Benoit's bounce-back abilities. This is the same guy who said, "I don't Google. I don't goggle."
Reply to flyingdutchman
flyingdutchman
Sorry, that comes off as way too critical. I just mean that Leyland probably isn't the biggest believer in verification through data analysis. I love the guy, and now I feel bad that I insulted him.
Reply to flyingdutchman
bornyank1
Don't worry! If you're right about Leyland, he'll never see your insult.
Reply to bornyank1
cdgarosi
The odd thing about Leyland not liking committees is that he's had them numerous times in the past. ANd he's succeeded with them.

Let's assume a committee is defined (retrospectively) as any time a team's leader in saves has fewer than 50% of that team's saves.

In his 11 years as Pirates manager, this occurred seven times (64% of the time). This includes the three straight seasons (1990 through 1992) that the Pirates finished in 1st place.

In the ten managerial seasons since, it has only occurred once under Leyland's watch (1998 with the Florida Marlins).

If we increase the percentage from 50% to 60%, he picks up two more seasons of committees - one more in his Pirates tenure (eight out of 11) and one more in his post-Pirate life (2008 Tigers).

Of course, this is a quick analysis. There could be other things at play (injuries necessitating change, the 'change' in handling relievers from the mid 80s/mid 90s to now, Leyland attempting to 'simplify' his bullpen, etc.)

Reply to cdgarosi
JosephC
Does "bounce back" necessarily mean pitching back-to-back days? I would have thought it meant pitching after having a bad outing.
Reply to JosephC
bornyank1
Leyland said "physically," though, so I don't think this is the typical "closers have to have a short memory" thing.
Reply to bornyank1
edanddom
That's how I read it as well. Nonetheless, good analysis from Ben. Personally I feel that Coke earned this role during the playoffs. The Tigers' failure to acquire another lefty specialist is what will prevent Coke from closing.
Reply to edanddom