They say spring training can’t teach you anything. I watched nine whole innings of spring training baseball last Saturday to try to disprove that and I thought I’d share my findings with you. 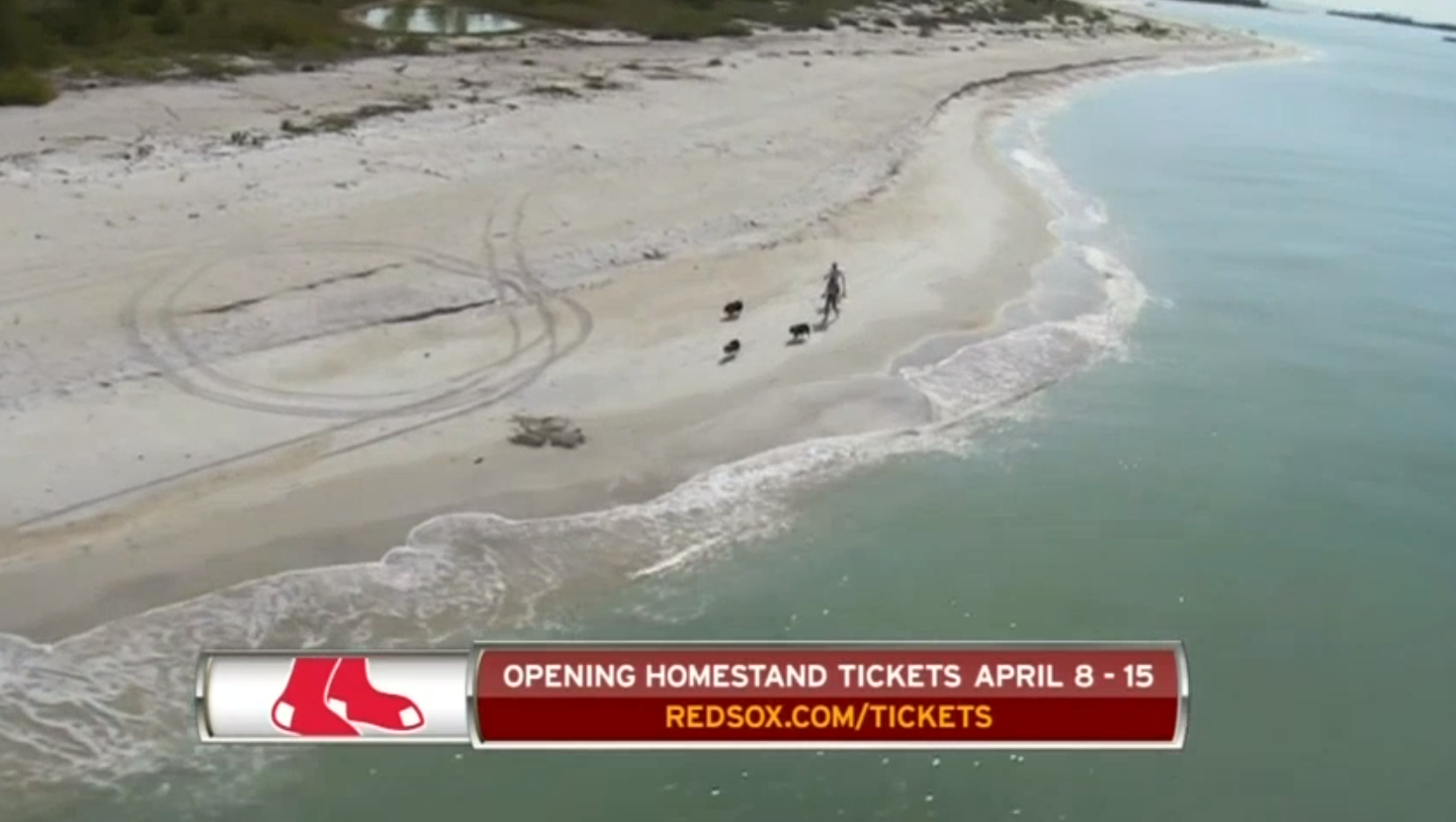 Like on any good date, we’ll start by complaining about the weather. Oh, it’s hot. Hot, I tell ya! Hot like with heat and hotness and everything. Oh, that’s what they’ll say but those of us living under a blanket of snow know the truth. The pristine waters, the delicate sandy beaches melting under your delighted toes, the warm salty-kissed air… it’s enough to make you quit your job and move out of this blizzard-infested town! If you get on that right now you’ll make it down there just in time for hurricane season. That’s where all your worldly possessions are picked up, broken, and deposited on your neighbors’ lawn. You’ll make it back north just in time for another blizzard. Life.

Think about spring training and you think about laid-back baseball. Or at least I do. It’s a time for learning and learning always entails mistakes. And nobody is better at mistakes than Travis Snider. At least that’s true in this game, though I suspect his penchant for blunders goes a tad deeper. Snider, who it should come as no surprise has posted a negative FRAA in four of his five big league seasons, had a rough day in the field.

Here he is fielding a line drive single by David Ross that bounced in front of him. 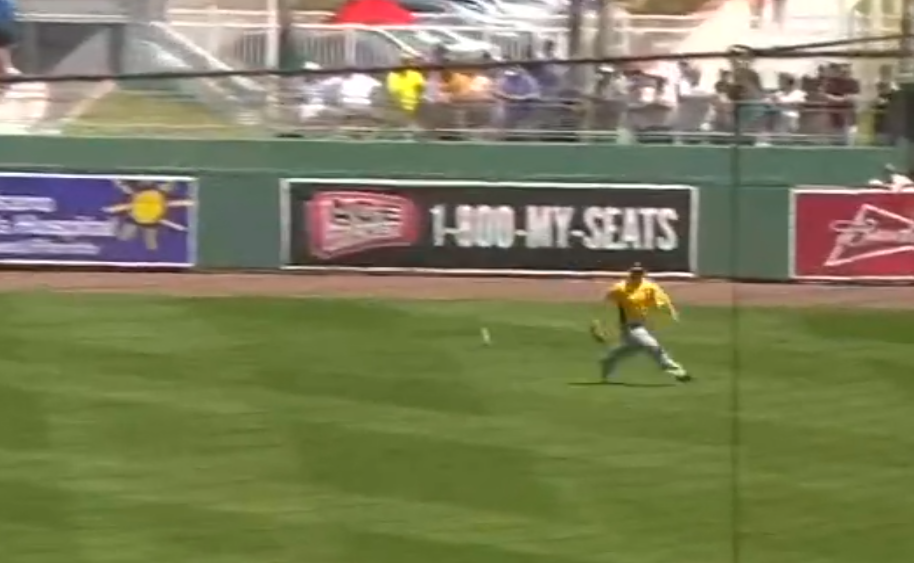 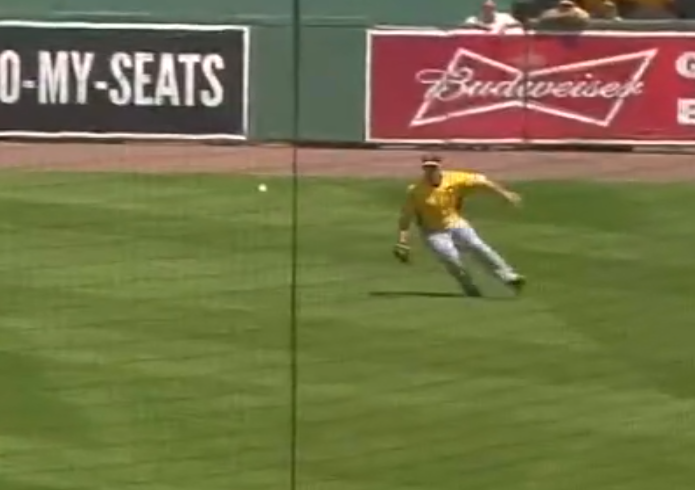 And by “fielding” I mean over-running the ball… 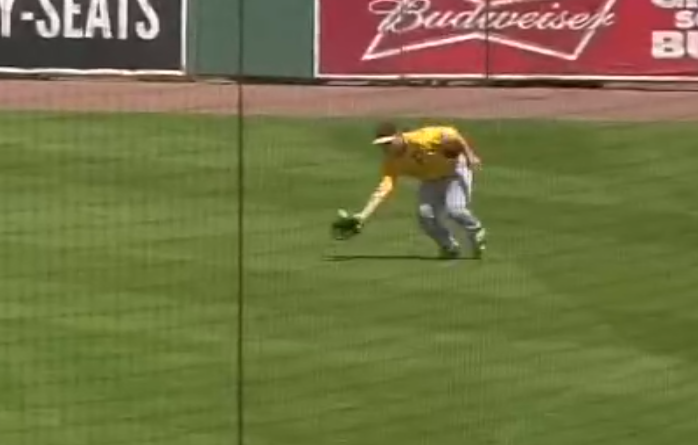 …letting it bounce off the heal of his glove… 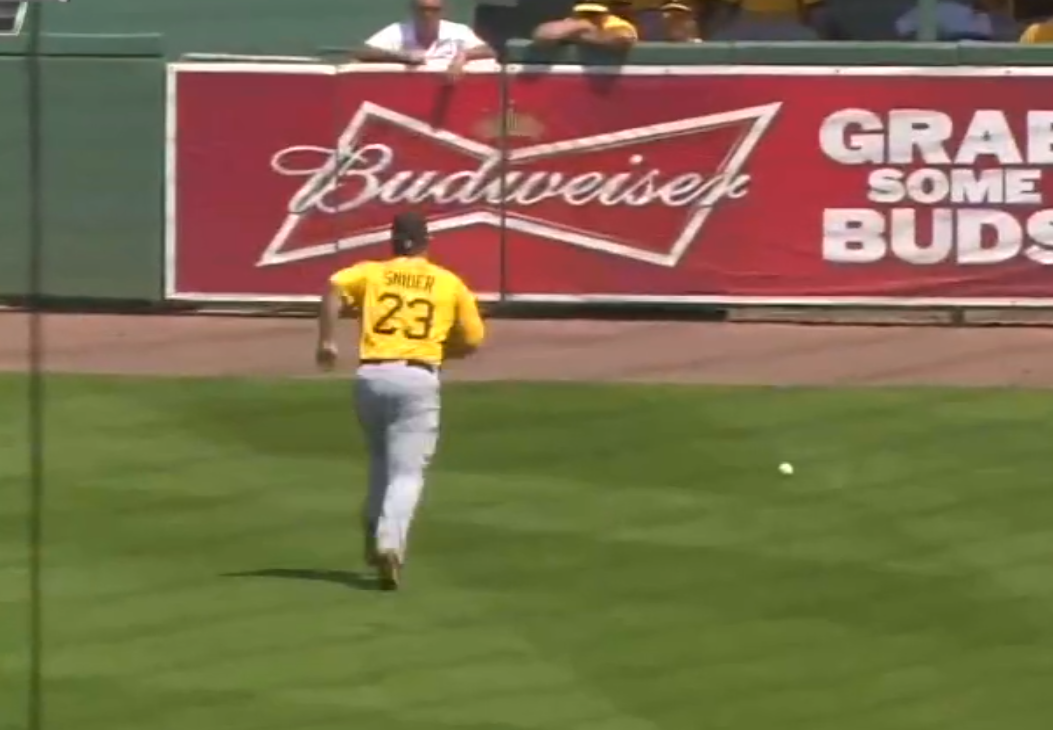 …and then showing us his number as he chases it back to the wall. Oops! If anyone asks you why spring training takes so long you can tell them it takes a good two months because that’s how long it takes Travis Snider to recall the proper way to field a single.

Later in the game Snider had a pop-up hit to him. Here it is, courtesy of Ben Lindbergh, in GIF form.

Favorite parts of that GIF:

The announcers kindly pointed out through giggles that baseball is a results-based business and, in Snider’s defense, he did catch it.

Spring training is about getting it right in preparation for the upcoming regular season. Getting it right means practice, and practice sometimes means getting it wrong. It’s all part of learning. Trying and trying again until you get it right. This works for all things. Like how to deal with a reporter asking you questions. The proper way, as we all know, is to spout as many clichés as possible. Shoehorn them into every part of speech. The more the better. Clichés are the player’s best friend.

Jamie Erdahl asked Buchholz two questions after he threw six innings against the Pirates. In this particular interview, Buchholz was a bit rusty. He started out well enough, but by the second question he’d lost his stuff. In answering the first question, Buchholz ably inserted three clichés. According to Buchholz, “it’s a grind,” but he’s “having fun with it” and “that’s what it’s all about.” Good start. But the second answer contained no clichés at all! He talked genuinely about how he likes having new manager John Farrell with a somewhat subtle nod to the differences between Farrell and his predecessor Bobby “The Ben Franklin of the Wrap” Valentine. It was honest and sincere. Oh well. It’s still spring.

It’s not just players who are rounding into form. Television announcers are working out the kinks as well. I took some notes on the announcing in this game. Here they are in bullet form.

5. Assorted Notes From The Game Also in Bullet Form 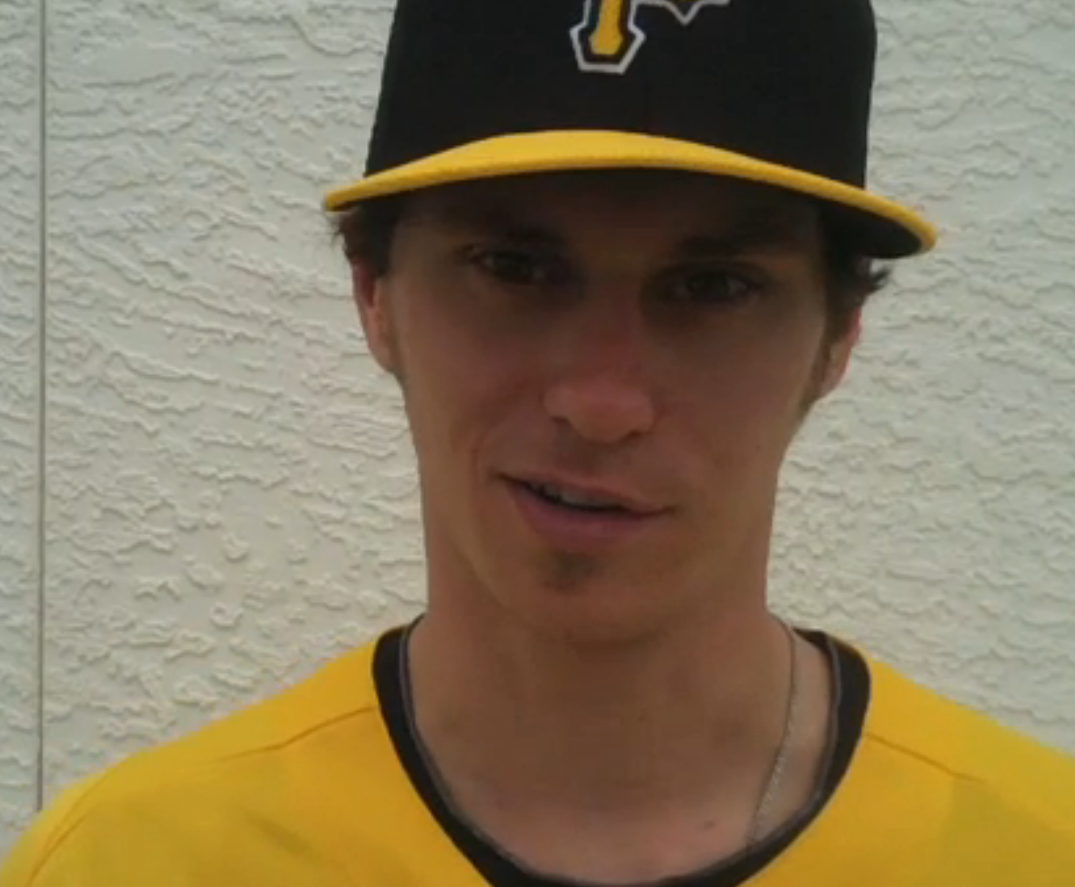 Okay, that one is from Monday’s game but I couldn’t resist. Happy spring everyone.

You need to be logged in to comment. Login or Subscribe
rawagman
Spring training is also for writers/analysts to work out the kinks. Like with Torey Lovolo, aka Torey Lovullo.
The irony was too rich not to be all pedantic-like.
Reply to rawagman
lyricalkiller
Thanks R.A.
fixed.
Reply to lyricalkiller
kmbart
I don't know if Travis Snider's glove was injured on the play shown above where the ball bounced off of it, but I definitely think it was the "heel" of the glove and not the "heal". Unless the glove was injured.
Reply to kmbart
mblthd
What do you expect for $34.95 a year?

P.S. - No need to mash the negative-rating button, it was just a joke!! Long live BP, etc.!!
Reply to mblthd
mattymatty2000
Oh me and my silly mistakes!

Apologies, everyone.
Reply to mattymatty2000
mblthd
Your mistakes are better than our accuracies, if we had your hands we'd cut ours off, etc.
Reply to mblthd