Ian Kennedy is the subject of an identity crisis. At a glance Kennedy looks like a command-and-control pitcher. You know the type. Small, with a fastball in the low-90s that, when it is thrown, is located well at the knees or on the black. The kind who changes speeds, throws strikes, and hides the fastball. On his best days this type resembles Greg Maddux; on his worst days he resembles a poor forgery. In many ways Kennedy fits the archetype. He does throw four pitches for strikes. He does mix speeds and locations. He does thrive based on his location. But Kennedy uses his fastball more and in ways that he should not be able to based on its velocity—or as teammate Daniel Hudson once put it, "If you look at the radar gun, you wouldn't say he's a power pitcher, but he pitches like one. He pitches up in the zone with it, gets swings and misses with it."

Four other pitchers with the same so-so velocity did crack the top-30: Chris Young (16th), Aaron Harang (20th), Marco Estrada (23rd), and Michael Fiers (27th). Yet none of those pitchers can match what Kennedy has done in recent seasons. Since 2010, Kennedy's first season in Arizona, he's started 98 games, compiled 624 1/3 innings, allowed a 3.55 ERA in a hitter's park, and struck out more than three batters per walk issued. He finished fourth in NL Cy Young voting in 2011 behind a 21-4 record. He's been durable and he's been effective on his way to overcoming limited raw stuff.

There's one other thing Kennedy has over those pitchers: he struck out more batters with his fastball than any one of them did last season. Kennedy fanned 95 batters with that four-seamer, good for fourth among right-handed starters. Conventional wisdom suggests Kennedy must get his strikeouts on 50-50 pitches on the fringes of the strike zone. In a sense this is correct. But a lot of the time Kennedy is throwing fastballs up and by hitters, not painting the corners or the knees. The only pitcher with 25-plus starts who had a higher percentage of his total strikeouts come on fastballs in the upper-half of the zone was the aforementioned Hughes. Both Kennedy and Hughes were at more than 46 percent—Lance Lynn, who came in third, finished at 39.7 percent.

Here's Hudson talking about Kennedy's fastball again: "Guys swing at it like it's 98 mph when it's really 91 or 92. His command with it is unreal and it makes his other three pitches, which are really good, too, makes them even better." Location is a vital piece of the starting pitching puzzle. How does a pitcher achieve good control and by extension good command? With good, repeatable mechanics. When Kennedy throws a pitch he often looks like this: 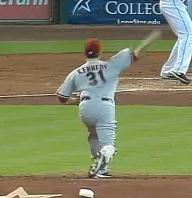 Summon thou's inner Doug Thorburn and he might tell you that Kennedy has good balance and posture. His momentum seems solid, too. You can see a strong glove arm when you watch Kennedy, and his glove is tucked into his midsection in the image above. Kennedy seems to be on a good line to the plate; his post-release leg movement suggests he's driving hard toward the plate. For those who would rather just ask the real Thorburn about Kennedy, his grades are available in the Starting Pitcher Guide. (He gives Kennedy average-to-above-average scores across the board.) It's no surprise then that Kennedy is able to throw his fastball wherever he wants with a sense of accuracy.

There's something else Kennedy's smooth mechanics gift him. See if you can't catch it by listening to him:

Near the end of the video Kennedy says, paraphrasing, "I don't know if you noticed but [my strong glove arm] gives me a deeper release point." This, as it turns out, is key to Kennedy's ability to mimic a power pitcher with a finesse pitcher's body and velocity. Kennedy knows his stuff, and so does Josh Orenstein, Director of Baseball Operations and Analytics at Trackman Baseball. "In 2012 we tracked Ian Kennedy's average fastball extension at 6-foot-5," Orenstein explained in an email. "The average fastball extension for someone standing 6-feet tall was 5-foot-10. One standard deviation from the mean for a 6-footer was 6-foot-4 so Kennedy, given his height, was in the top 15 percent for MLB fastball extension."

When Kennedy throws his fastball up in the zone there are two effects at play. The first effect is location-based. Eric Seidman wrote a revealing article about perceptive velocity in the past. Use the more conservative of the two charts presented in Seidman's piece and Kennedy's fastball appears 2 mph quicker when thrown up and over the plate but within the zone. The second effect also deals with spatial matters. By getting that long extension Kennedy is cutting down on the distance his pitch must travel from his hand to the plate, thereby giving the batter less time to react.

This isn't known as the David Robertson Special but it could be. Robertson is the poster child for how a deep release point can impact a fastball's viability. If Kennedy's longer-than-normal extension is giving him just an extra mph on his heater then his 90 mph fastball feels more like 91 mph. Add in the location-based oomph and that fastball starts feeling like 93 mph. Give Kennedy one more mile for smart sequencing and his fastball is no longer substandard at 90 mph, but above-average at 94 mph.

So Hudson is right when he says the pitch plays quicker than it is. That trick is the byproduct of Kennedy's ability to repeat his above-average mechanics, which results in good command and a deep release point. Kennedy may not be a power pitcher but he isn't a finesse pitcher, either. Instead he combines aspects of both and blurs the line between them every time he strikes someone out on a high, well-placed fastball.

Thanks to Tim Collins, Ryan Lind, and Andrew Koo for research assistance. Special thanks to Josh Orenstein and Trackman Baseball for additional data support.