Another week of spring training and World Baseball Classic play means another batch of new arms. There isn't much left in terms of hot prospects, so we'll cast a wide net and do what we can.  What have we got? One mid-grade prospect, one non-prospect, and one blast from the prospect past.

Rob Rasmussen, LHP, Los Angeles Dodgers
Our first arm is the most prospect-y of the group, but he's not a premium talent. A Marlins draft pick out of UCLA, Rasmussen moved out of the animal kingdom when he was traded to the Astros (minor-league assignments excluded). A second trade sent him to the Dodgers, the club that drafted him out of high school in 2007.

In the midst of these travels, our 2011 Prospectus described Rasumussen as a “finished product, mixing sharp curves with above-average velocity for a lefty (89-93 mph) and excellent command.” The optimism had waned by 2013, when we noted that his “changeup was working about as well as his fastball and slider last year … but none [of the pitches] was working particularly well.” 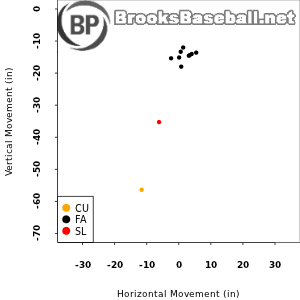 Talk about reading tea leaves—this is more like reading a tea leaf when it comes to the breaking stuff, since Rasmussen threw only one of each. The slider action was average-looking, but the curveball has impressive depth. The alignment of the fastball and the breaking pitches hints at his high arm slot.

Loek Van Mil, RHP, Cincinnati Reds
This is just about all there is to know about Ludovicus Jacobus Maria van Mil. According to Adam Sobsey, the tall Dutchman can be described with one set of numbers: “7-foot-1 often describes his walk rate, too.”

Yes, he's very tall. Our 2010 Prospectus noted that he was “living off his sinker, which is made all the more effective by his height.” Every other Prospectus comment mentions his height or else includes a Patrick Ewing joke. (Incidentally, here's my favorite Ewing joke: Go to Varsity in Syracuse, New York, and order chicken wings. Tell them your name is Patrick. When your order is ready, a central New York accent will declare, “Patrick Ewings are ready.” This last worked circa 1993, so attempt it at your own risk.) 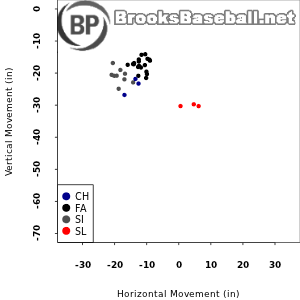 Van Mil has a funky arm angle, so I think, as noted in the chart, that he actually throws quite a few four-seam fastballs and not just two-seam sinkers. They'll all have the arm-side run of the low-slot delivery with the unusual downhill tilt, so it’s easy to see why Van Mil’s frame and delivery make him alluring. Unfortunately, he doesn't seem to be fooling many hitters, considering this his career minor-league strikeout rate is 6.7 per nine innings, and it comes with a walk rate of 4.2 per nine innings. He made it to Triple-A last year, but was abysmal in fewer than 20 innings of work.

During the World Baseball Classic, Van Mil's fastballs were coming in at 93 mph, which may feel like more if he's getting any kind of extension toward home plate. His slider (86 mph) seemed to lack depth and his changeup (85 mph) was straight off his two-seamer without any extra action. The Reds have plenty of bullpen arms so, despite the allure, there's no reason to expect Van Mil to make the jump to the majors this year.

Mark Pawelek, LHP, free agent
Pawelek's emergence as a LOOGY in the WBC was quite a shock. The Cubs’ first-round pick in the 2005 draft was last seen in 2010—in the independent Frontier League. Pawelek hit a wall less than two years after he was drafted, as Kevin Goldstein mentioned .

Seemingly out of nowhere, Pawelek made the 2013 Dutch team in a tryout. I've been trying to confirm a report that he was seen working out with a junior college is Arizona before that, but am waiting for details and will update this post once I obtain them. 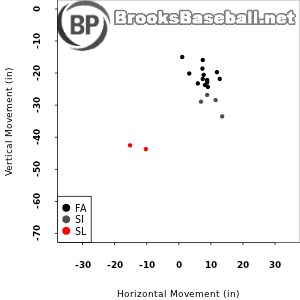 That's the low-arm-slot pattern of a LOOGY hopeful. What you can't see in the chart above, however, is the lack of velocity. Pawelek’s fastball and sinker were around 84-86 mph, and the slurvy-looking slider came in at less than 75 mph. Look for Pawelek to reappear somewhere overseas or in independent ball. I doubt he caught the attention of any big-league scouts, beyond stunned reactions and vague recollections of the prospect that he once was.