It's a spring training game. Some guys are fighting for jobs, others are just getting their work in before the grueling regular season begins.

Michael Kirkman starts for Texas against Seattle at Peoria. He will work three perfect innings, which isn't important. What's important is this changeup he threw on July 18, 2012: 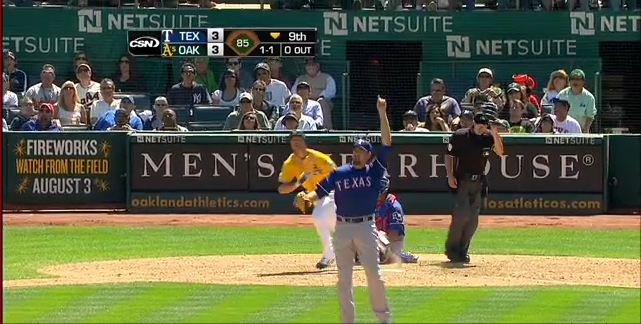 At spring training, you can hang out at the backfields and watch pitchers do this drill all morning long. They are instructed to point and yell “Up! Up! Up!” on any ball that might be caught by an infielder.

If the pitcher doesn't yell loud enough, the coaches will make him do it again. They will remind him that although there are only 30 people watching practice this afternoon, there could be 30,000 people watching when it happens during a game.

In this photo, A's shortstop Brandon Hicks is the batter. As we noted at the time, he was a career .100/.156/.150 hitter in 64 big-league plate appearances before this swing. Kirkman's gesture is understandable and probably even appropriate given the caliber of hitter he was facing. 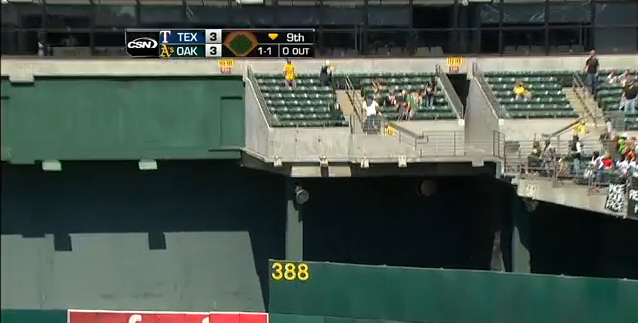 Hicks' drive landed 420 feet from home plate beyond the right-center-field fence and resulted in an Oakland victory. Still, as a reluctant optimist, I love Kirkman for pointing skyward on the pitch because you gotta believe. How did he know second baseman Ian Kinsler would give up on the play?

Jim Adduci is manning first base for the Rangers. This surprises me because it seems like he has been around forever. Then I realize I'm confusing him with Jim Bonnici, a first baseman in the Mariners system in the early '90s. Adduci has knocked 24 homers in 3,000 minor-league plate appearances, while Bonnici hit 26 in 1996 alone, so it's a stupid mistake to make.

The names are similar in my mind. And when I think of Bonnici, I think of former Mariners outfielder Barry Bonnell, whom I used to confuse with former Blue Jays outfielder Rick Bosetti. (It didn't help that they were teammates in Toronto in 1980 and 1981.)

I had the same problem with one of Bonnell's teammates in Atlanta, pitcher Tony Brizzolara. I used to confuse him with Steve Bedrosian. Somehow, Rick Behenna never entered into the equation, although he probably should have.

The way to differentiate Brizzolara and Bedrosian is simple. Brizzolara didn't have much of a career, while Bedrosian did. But hindsight is 20/20.

Kirkland is replaced by Texas closer Joe Nathan, who retires Franklin Gutiérrez on two pitches. The next batter is Kyle Seager, who draws a walk. The 2-2 and 3-2 pitches are both sliders that miss. It's the sort of sequence that suggests Nathan is getting his reps in. Maybe there will be occasion for him to bust out sliders in that situation at some point, but probably not against a hitter like Seager and not with nobody on and one out in the fourth.

You know the last time Nathan pitched the fourth inning of a regular-season big-league game? August 29, 2000. He relieved Liván Hernández, who got beat senseless by Enrique Wilson, Warren Morris, Jason Kendall, Brian Giles, and John Vander Wal on a Tuesday evening in Pittsburgh.

Nathan entered with nobody out in the third and pitched four innings. He also batted twice, striking out both times against Kris Benson, who worked eight scoreless. So yeah, if you're worried about Nathan throwing sliders to Seager in the fourth inning of a spring training game, you can stop.

Nathan gets Kendrys Morales to chase that same slider for the second out, bringing up Raúl Ibañez. After missing with the first pitch, Nathan leaves a two-seamer up and out over the plate. Ibañez hammers it to right for a two-run homer.

These guys have been around a while and made a lot of adjustments in their careers. Nathan was drafted in the sixth round as a shortstop, Ibañez in the 36th as a catcher. They have never been teammates but have faced each other eight times during the regular season. Ibañez is 0-for-8 with three strikeouts and one GIDP. But he'll always have St. Patrick's Day 2013.

I'm preaching to the choir here, and it's only spring training, but can you guess who “earned” the win in this game?

Yep, Loe coughed up a late lead but vultured the victory when Texas right-hander Wilmer Font coughed it back in the form of a Morales homer. The pitcher who contributed the least to his team's success got the most credit for it, which is totally fair.

There have been worse examples in the regular season. Take the September 27, 2011, contest between the Dodgers and the Diamondbacks in Phoenix. One of these pitchers improved his record to 8-0 on the season with this performance (hint, he's currently an outfielder in the Nationals organization):

None of this is a knock on Loe, whose inning hinged on a borderline 0-2 changeup to Greg Miclat that was called a ball. Miclat ended up drawing a walk, and the situation deteriorated from there. The larger point is that a system set up to reward the worst performer is a broken system. Based on the numbers, you could make a case for three of the four Seattle pitchers to notch the win, the lone exception being the one who actually got credit for it.

Beavan works with ruthless efficiency, if not fear and surprise. He needs eight pitches to navigate the first inning and eight more for the second, finishing with 61 in six innings. Of those, 45 are strikes, which comes out to 74 percent.

This is obsessive even by Beavan's standards. Last year, 67 percent of his pitches were strikes, placing him second in the American League (minimum 501 plate appearances against) behind Oakland's Bartolo Colón.

Still, this afternoon's total falls short of Beavan's high-water mark in 2012. In an August 1 contest against the Blue Jays, he threw 64 of 82 pitches (78 percent) for strikes. That wasn't the highest total last year, but it ranks among the top 10 for games in which the starting pitcher lasted at least five innings:

What does this tell us? Well, among other things, it reminds us that baseball is full of surprises. Because nobody expects to see Morales here.

The rest of these guys make sense. So do the pitchers that follow Beavan and Arroyo: Chris Capuano, Wade Miley, Colby Lewis, Anibal Sánchez, Johan Santana (that would be the perfecto), and encores from Colón and Lee (the two strike-throwingest pitchers in baseball last year).

Beavan puts the ball past hitters slightly more often than Aaron Cook, which is where Cook's being an extreme ground-ball pitcher comes in handy. Beavan throws strikes, pitches to contact, and allows a ton of fly balls. And the Mariners have moved in the outfield fences for 2013.

This paragraph is where I would offer the fact that Arroyo allowed 46 homers in 2011 as evidence of something if I could. Because it would make the previous table meaningful and not just kind of cool. I'll get back to you on that after the season.

On second thought, Beavan may not be good enough to allow 46 homers in a season. He is fighting for a spot at the back of the Mariners rotation. Jeremy Bonderman, who hasn't pitched in the majors or minors since 2010, is in the mix.

Another then-possibility, Jon Garland, last pitched in June 2011. Seattle releases him shortly after this game despite Garland's 2.25 ERA in the Cactus League. The Rockies will sign him days later, hopeful that his ground-ball tendencies will outweigh his lack-of-strikeout tendencies and make him useful at Coors Field.

Beavan, Bonderman, and Garland also demonstrate how difficult it is to succeed in baseball. All were former first-round picks who made it.

So is Scott Kazmir, who faces Beavan in his next start. Kazmir had a 5.34 ERA in the independent Atlantic League in 2012. One of that league's best pitchers last season was 40-year-old John Halama. Other familiar names who pitched well there include Dan Serafini, Randy Keisler, Dan Reichert, and former big-league outfielder Jason Lane.

Kazmir did not pitch well there, and yet here he is in camp with the Indians. Beavan, meanwhile, allows nine runs on 16 hits in his start against Kazmir. In the third, he surrenders back-to-back home runs to minor-league vet Cord Phelps and former Rockies managerial candidate Jason Giambi.

A study in restraint, Seattle skipper Eric Wedge says of Beavan's performance, “He was up a little bit. We got him up to 100 pitches, which we needed to do.” It is worth noting that 71 of those pitches were strikes, illustrating the inherent risks in working around the plate without overpowering stuff.

In a way, spring training is like falling in love. It is intoxicating, a hint at the best of what we have to offer each other, baseball and its fans. It blinds us to reality, if only for a while.

As of this writing, the Mariners lead MLB with 48 home runs. That is the same number as the Rays, Yankees, and Red Sox have hit combined. Perpetual tease Justin Smoak, who came to Seattle with Beavan in the Cliff Lee trade, has a .386/.417/.773 line that makes us wonder if this is the year he fulfills the expectations that accompany a first-round pick.

We try not to think about the fact that Smoak's career has already been a success as compared to the careers of most first-round picks. We want more. We want a .773 SLG but would settle for .400.

The team home-run leaderboard offers similar hope, much of which will prove to be false. This spring, the Mariners are followed by the Cubs, Braves, Astros, and Indians. Three of those teams have top-five picks in the upcoming June draft, and only Atlanta had a winning record in 2012.

Last spring's top home-run teams were the Tigers, Padres, Cubs, Brewers, and Angels. San Diego finished 28th in homers during the regular season. Jesús Guzmán and Andy Parrino combined for 11 Cactus League bombs and then hit 10 in games that counted.

We know this about spring. We fall for it every time. Because we want to.

It is late March. Nobody has been eliminated from playoff contention yet. There is plenty of time to bemoan whatever fates might await our favorite teams, why rush?

Why Kirkman and Hicks? Why Bonnell and Bosetti? Why Nathan in the fourth inning? Why Owings and his vultured win? Why Morales' unexpected efficiency?

Questions are easy, answers are hard. Still, it doesn't hurt to ask.

You need to be logged in to comment. Login or Subscribe
kcshankd
I never did figure out which Brian Hunter or Alex Gonzalez was which.
Reply to kcshankd
AWBenkert
Santana threw a no-hitter, but not a perfect game.
Reply to AWBenkert