One of my plans for the 2013 season is to try to watch baseball like a scout would. Buy a thousand index cards, jot down notes on each player in each game, throw some numbers on the tools, and file them away. I figure the practice will give me more discipline, help me focus on the process in each play, and leave stronger impressions on my mind about what I watched.

Of course, I don’t have nearly the knowledge or technique to actually scout, but ideally this will be a start toward picking up things that I'd like to pick up. For example, it might have been nice to have noticed this:

After Jered Weaver pitched three innings against Italy in his second exhibition start of the spring, he said that he's finally reverting to the lower arm angle he favored when he was younger. Weaver said he'd gotten away from stretching and had changed gradually to a more over-the-top delivery in recent seasons.

"I am more of a three-quarter guy and the last couple years I went more over the top to go around the tightness," he said. "Now I can go back to my normal arm slot."

"As far as the naked eye, you aren't going to see (the change)," Butcher said, "but his arm feels a lot better to him."

I’ve been watching Jered Weaver closely since 2008, and I didn’t notice this at all. I’d have sworn he was already and always more of a three-quarter guy. I once looked at his pitching motion over the years looking for clues related to another topic, and I missed any change in his arm slot.

And yet, it’s just like he says, a small but persistent change. With the help of PITCHf/x, and looking at his vertical release point in each of the past five seasons, and adjusting (thanks, Max Marchi!) for the changing calibration of the PITCHf/x cameras, we see a clear trend upward. On all fastballs thrown at home in each of those seasons, here are the median vertical release points:

See a difference? You might. I might. He's more upright in 2012, and looks like he's got more drive—longer stride, more follow-through—but I'm not sure on the arm angle. But maybe frame-by-frame: 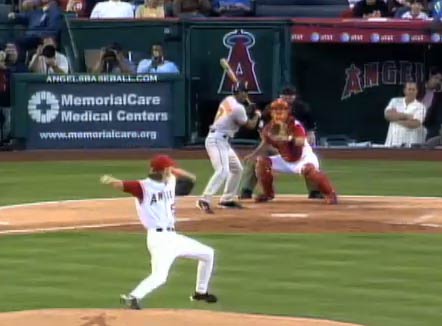 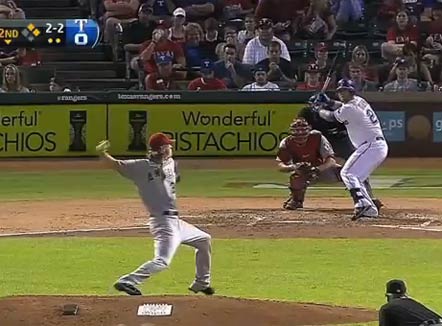 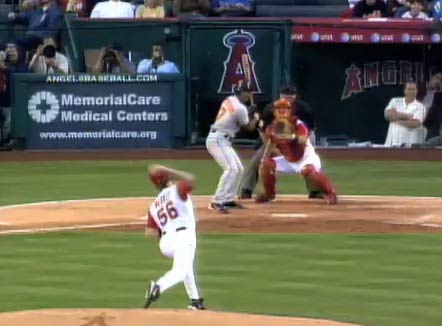 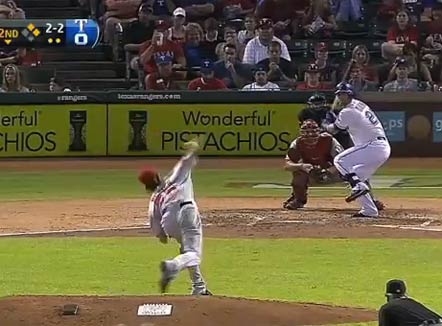 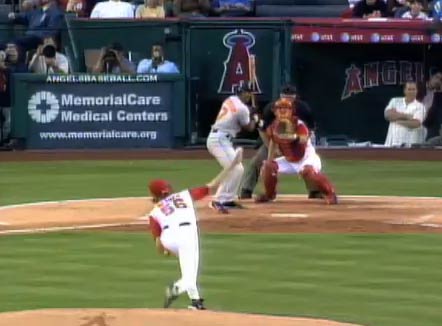 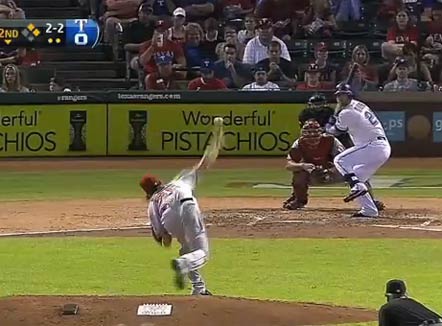 Oh wow, there it is. For exactly one frame, the difference is stark.

Here is each of those images lined up with the same frame for one of Weaver's spring training pitches this month. 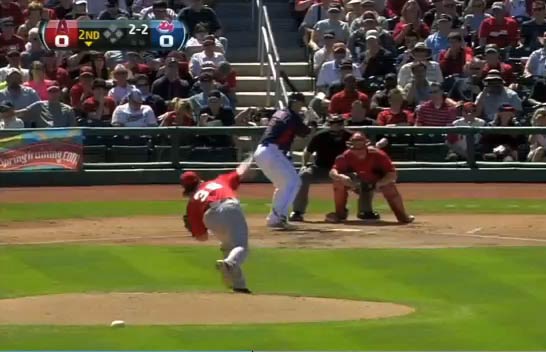 So we have concluded:

Being aware of it is not the same as knowing what it means. Noticing Weaver's arm slot would have raised questions that aren't necessarily answerable, such as "is this good or bad?" Those questions are hardly ever easy. But, for instance, there is some indication that Weaver's arm slot affects his velocity. Dividing his 2012 fastballs* into five release-point tiers—the lowest fifth, the second-lowest fifth, etc. —will have you certain there's a trend here:

Except that, as Max Marchi showed last year when writing about Barry Zito, arm slot and velocity might share a confounding variable: fatigue. The later into a game, Max showed, the lower the arm slot. That's not what we're talking about with Weaver—in fact, the opposite is true; the lower his arm slot, the higher his velocity. But the same principle might be true, especially if, as Weaver says, his arm slot gets higher when his shoulder is weaker.

There is also some indication that Weaver's arm slot affects his horizontal movement. The movement he got on his two-seamer at each arm slot tier:

but the difference completely disappears if you limit it to two-seamers thrown in the first three innings, when Weaver is presumably not as tired. So, again, the causation may be coming from a different direction altogether.

And, logically, the arm slot could affect his ability to take advantage of the hitter's backdrop in Anaheim. I went out to the park in the middle of the day Tuesday to see what, exactly, it looks like from the batter's box. From the right-handed hitter's box, the view against Weaver is unexceptional: 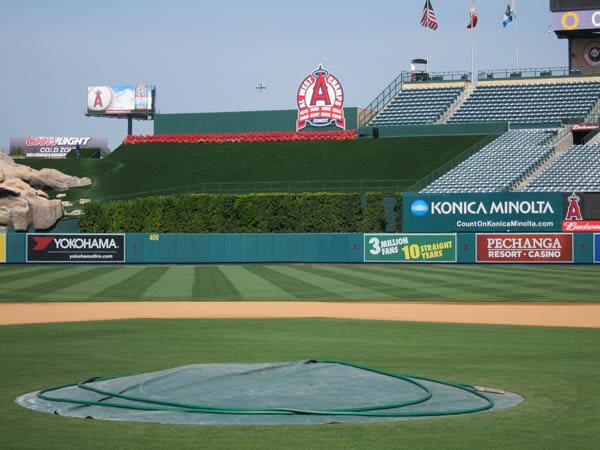 but this is the view from the left-handed batter's box, and note that the camera doesn't do justice to the white glare of the mid-day sun off the rockpile: 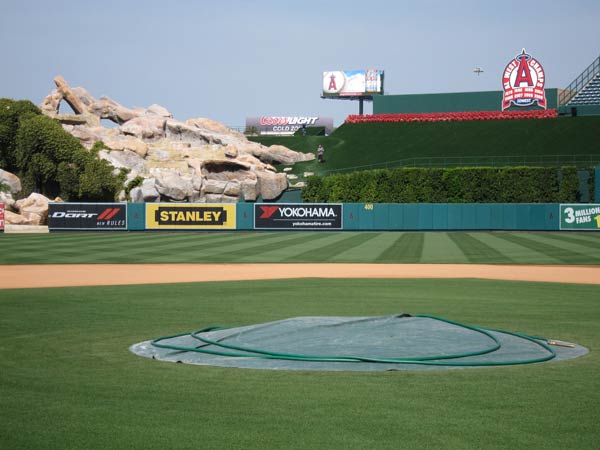 If Weaver really is able to throw from an extreme-enough angle to release his pitches out of the rockpile background, then lowering his arm slot would be an advantage. I guess. What am I, Jack Maloof?

The point isn't that any of these effects are or they aren't. The link between process and outcome is hard to prove. Weaver's arm-raising coincided with his best years, ERA-wise; it also coincided with his declining strikeout rate, strikeout-wise. It coincided with much better results against lefties, but there are plenty of explanations for that—some discussed here last summer—that might be more compelling than this one. Come to think of it, the subtle shift could be used to narrativize (waiting … waiting… and there's the squiggly red line under narrativize) almost any outcome:

So I suppose we should all just keep watching. Closely.

*In all cases, fastballs were limited to home ballpark within a single year to avoid substantial calibration issues. Thanks to Ben Lindbergh and Max Marchi for research assistance.

You need to be logged in to comment. Login or Subscribe
BloodStripes
Nice work Sam. To follow up on this........If I have learnt anything from reading and listening to Doug Thorburn it is pitching over the top seems to reduce a pitchers posture and therefore puts more strain on his back. I would suggest that Weaver's posture was much better back in 2006 with his 3/4 arm slot. In the 'maybe' and 'wow' photos you can easliy notice more head and spine tilt in 2012. Weaver lost time to a back problem last year if I remember correctly. Even though he was still awesome last year reverting back to the 3/4 arm slot should most certainly be of benefit.
Reply to BloodStripes
alwaxman
Good point... but it looks like Weaver changed his arm slot but his posture still looks suspect and not as upright as it was in 2006. It would be great if Doug Thorburn or another expert on the BP staff could weigh in.

Reply to alwaxman
tombores99
Sorry I'm late to the meeting guys, but here's my 2 cents.

Arm slot is mostly determined by two things: the player's posture (spine angle) and the angle of shoulder elevation (abduction).

In the photos that Sam has graciously captured, Weaver's posture has become progressively worse over the years, which has artificially raised his arm slot. In fact, his 2013 posture might be the worst of the bunch [the picture is captured a split-second later in the 2013 release-point pic than in the one from 2012, which might be slightly biasing]. Now this can indicate an intentional adjustment or it could be signs of fatigue or a lack of functional strength - I should note that it is common to see pitchers in spring training who are still building strength and not yet 100%, and thus struggle to maintain posture.

However, Weaver's angle of shoulder abduction is noticeably lower in the spring training photo from 2013, which is likely the adjustment that he is consciously making (it certainly "feels" lower to him). The angle of elevation that he is showing in the spring training game is definitely closer to the angle from '06 than the additional abduction that he showed last year.

The combination of poor posture and lower abduction might give him an overall release height that is slightly lower than in the recent past, but it is still higher than in his rookie year.

Great observations, BloodStripes and alwaxman, and thanks for the head's up.

In an effort to attempt to know my Red Sox better, I attempted to track every pitch, the location, the speed, and the result, (and of course the matchup.) By doing this I picked up an extraordinary amount of information. For example, Cody Ross has no idea what to do on outside pitches and can't hit an outside breaking ball. He also makes middle inside fastballs his bitch. Carl Crawford, in his short time with Boston this year, liked to try and hit the ball up the middle, moved his right leg back inside the line of the batters box, and wasn't very effective on pitches away. Mike Aviles is a sucker for a high 2 strike fastball and LOVES to swing early in the count.

It's not scouting in the traditional sense, but its much more personal. I would highly recommend doing this as opposed to trying to put numbers on major league players, because that's pretty easy to do and you won't be learning as much.

Let me know if you want an example.
Reply to HPJoker
redsoxin2004
Brady, interesting. What I always wanted to know is how hitters make adjustments. For instance Middlebrooks started hot but cooled off. Why? What did pitchers and scouts see, what did they do?
Reply to redsoxin2004
sahmed
Absolutely love that you went out to the ballpark to grab those photos. A+.
Reply to sahmed
hyprvypr
These kinds are articles are of the most elite level in the study of baseball. It's no wonder many BP members go on to glorious things and positions very high up the food chain.
Reply to hyprvypr