Last April I chronicled Fernando Rodney's shift on the mound and the potential ramifications. Though examining similar shifts bore no predictive fruit—pitching, as it turns out, is more complicated —it was a fun topic that showcased the creativity put forth by the league's pitching coaches. The new season will bring new changes to uncover and analyze. But before we forget about 2012 let's take one final look back at the year in shifts.

Max Marchi was kind enough to assist me, as he did in the first piece, by providing the PITCHf/x data complete with his own ballpark adjustments. The top-10 shifters, as ranked by absolute difference in  horizontal release point from 2011 to 2012, are presented in the table below. This methodology benefits those who made one big shift from the first year to the second rather than those who made a number of small moves, which is to say fervent shifters like Francisco Liriano (who moves based on the batter's handedness) are absent from the list. Rodney is amusingly absent as well, since he failed to meet the playing time requirement of 1,000 pitches in both seasons. Rest assured, he would've finished at the top.

There are various reasons why pitchers will shift on the rubber. Some of it is due to health concerns, others due to performance reasons. If a pitcher lands closed and has trouble hitting the glove side then you might move him farther that way to alleviate the issue. The inverse scenario is also plausible. Sometimes its a matter of taking advantage of a pitcher's natural movement (especially true for sinkerballers), and other times it's about creating better angles for other pitches. In most of the above cases the changes were minimal: David Hernandez took his easy gas from the first-base side of the rubber to the third-base side; Chad Durbin did the opposite; David Price, the American League Cy Young winner, made his change early on, which was then noted in a May piece I did on his evolution; and so on. A lot of these are simple, no-frills tweaks that would be boring to show in image form. Then there's Tim Collins: 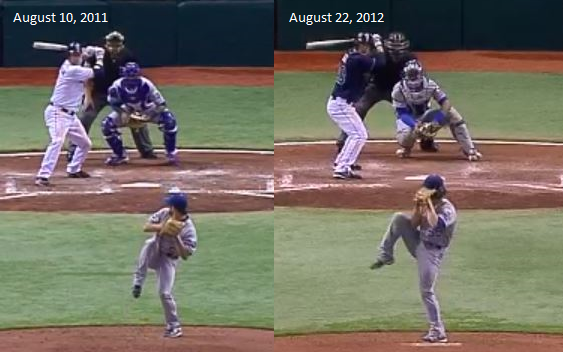 Collins changed in almost every way possible. He scrapped his Cueto-like spin move for a high leg-kick, leveled his shoulders, and moved about a foot closer toward first base. You can't see the rubber well in the 2011 image but if you draw a line from Collins' back leg upward it'll give you an idea of the disparity. In 2011 Collins' back leg lines up with the right-handed batter's box. In 2012 his back leg is over the plate. Give pitching coach Dave Eiland credit for the guts required to make sweeping changes like this, and while you're at give Collins some dap, too. After posting a 113 ERA+ in his rookie season he didn't have to consent to the changes. But he did and that's admirable.

A reasonable person would ask why Collins and Eiland felt these alterations were worthwhile. What was there to gain? In theory, Collins should have gained a few things. The most important pluses should have been better control and command. He also should have gained a better angle against same-handed batters. Don't just take my word for it, here are Eiland and Collins describing the causes and effects:

"We straightened out his alignment," Eiland said. "We took some of the rotation away from him and also lowered his front side. We also moved him from the third-base side of the rubber to the first-base side of the rubber. That was all designed to help his command, also give him a little bit better angle vs. left-handed hitters."

"At first it was just addressing what we thought the problem was, and that was not being square," Collins explained. "There was so much going on trying to deliver the ball to the plate that if one thing goes wrong, it's a lot harder for me to throw strikes. We simplified it a lot, put my foot more flush on the rubber and just kind of did a lot of basic stuff. [Eiland] explained it as, 'If you do a lot of little things right, you're going to get bigger results, better results.' So I tried to buy into that right away, and it worked right off the bat. There's no reason not to stick with it."

Did the tweaks work in practice as they were supposed to work in theory? For the most part yes. Collins sawed into his walk rate, dropping it from 16.3 percent to 11.5. He improved his strikeout rate to 31.5 percent from 20.3. About five percent more of his pitches were determined to be within the strike zone, per PITCHf/x data, and two percent more of his pitches went for strikes. The one negative is Collins' performance against lefties, as his line went from .210/.378/.305 to .239/.333/.436. (Collins  made up for this by lowering his OPS versus righties by 52 points.)

So often these massive overhauls come when a player is in trouble. Collins was not in trouble, at least not in the conventional sense. He was fresh off a successful season by surface-level standards. He trusted Eiland and wanted to improve enough to change things up in a big way, even if it meant risking a complete collapse; these overhauls are never without risk on either side. The gamble paid off as Collins took well to his new delivery and sight-line, and went on to improve his peripherals and ERA.

We may not know who the 2013 versions of Rodney and Collins are yet, but you can bet every pitching coach in the league has one or two guys he'd nominate.

Thanks to Max Marchi for research assistance.

You need to be logged in to comment. Login or Subscribe
rgrunder
What a terrific name for a column.
Reply to rgrunder
RJAnderson
Sam Miller's doing.
Reply to RJAnderson
kcheaden
Seeing as how TB works miracles with pitchers with good stuff and bad results I'm betting they do a good bit of tinkering with Fausto...er...Roberto Hernandez.
Reply to kcheaden
RJAnderson
We'll see how that works out. He does have the stuff to be successful, however, and you can't teach that.
Reply to RJAnderson