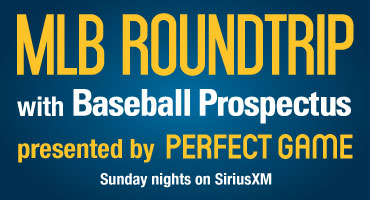 The weekly three-hour program, officially called MLB Roundtrip with Baseball Prospectus presented by Perfect Game, will be hosted by MLB Network Radio's Mike Ferrin, Baseball Prospectus' Joe Hamrahi and Perfect Game's Daron Sutton.  The show makes its 2013 debut this Sunday, March 17, at 7:00 pm EDT, and will also be broadcast at the same time during the second week of the show on March 24.  Once the MLB regular season begins the program will air after the completion of the Sunday night game broadcast.

Ferrin, Hamrahi and Sutton will welcome several guests to the program, including baseball experts with both Baseball Prospectus and Perfect Game to talk about the game of baseball at the Major League, Minor League and amateur levels.  You can access the program on SiriusXM channel 89, XM channel 89 and Sirius channel 209.

All MLB Network Radio programming can be found here:  http://www.siriusxm.com/mlbnetworkradio?p=1283874425129