The defending World Series champions visited Surprise, Arizona and matched up against the Royals on March 2, in an early-spring contest that marked our first PITCHf/x look at a small group of Giants prospects.

The influx of new arms has slowed, with a mere handful of recent debuts after the early set of nearly two-dozen. Breaking with the theme, this article’s focus will not be limited to the most noteworthy prospects; the Giants brought out four new arms, and we’ll extend a warm embrace to each of them.

Since we don’t have scouting notes from our prospect team on the less-well-regarded pair, I worked backward, essentially putting words in their mouths on the stuff that these hurlers bring to the mound. It might also be interesting to compare the PITCHf/x findings with the scouting reports compiled by Jason Parks and the gang.

Scouting report, from “Factors on the Farm”…

“After a solid Double-A season, former 12th round pick Chris Heston positioned himself for a major league look in 2013. Itís not an impact profile, but if he can spot his heavy two-seamer down in the zone and use his off-speed stuff to keep hitters off the fringe velocity of the fastball, he can find some success at the highest level.” 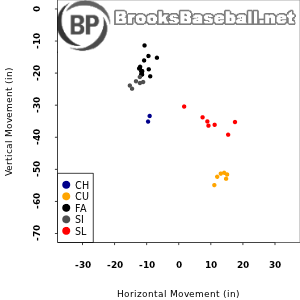 Given Heston’s middling velocity, he could benefit from a more consistent and harder breaking pitch, perhaps a cutter. Pitchers whose fastballs struggle to crack 90 mph on the radar gun tend to fare better if they have a firm secondary offering to provide a fourth gear of sorts to their arsenals.

Scouting report, from “Factors on the Farm”…

“The 24-year-old has good stuff from the left-side—including a plus fastball—with feel and utility for a deep secondary arsenal. Some scouts think Kickham would be a better fit in the bullpen, where his velocity could play up and his command issues could play down, but he has the body and the arsenal to develop into a back of the rotation workhorse. Either way, Kickham is a major-league arm and should see action in 2013.”

I wasn’t able to find a picture close enough to Kickham’s release point to verify the arm/shoulder angle, but he seems to come from higher than three-quarters, based on the movement on his pitches. The lefty also appears, in my opinion, to be short-arming the ball, but don’t take that to the betting window. 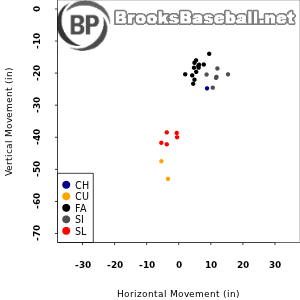 Unless Kickham’s velocity really ticks up in short spurts, I don’t see put-away stuff here. From that standpoint, I prefer the back-end starter projection to his profile as a reliever. One caveat to that, though: The unspectacular radar-gun readings might have been a product of timing—specifically, that it’s still early in the spring.

According to Jason Martinez’s latest depth chart, Heston and Kickham are both “on the outside looking in” as starters, which makes sense given the Giants’ existing rotation. Matt Cain, Madison Bumgarner, Tim Lincecum, Barry Zito, and Ryan Vogelsong are locked into their spots, assuming that they are healthy on Opening Day. The next two arms on this list project as relievers, and they, too, are unlikely to crack the big-league club coming out of Scottsdale.

Yes, Bochy. The manager's kid has middling stuff, thrown from an over-the-top angle and with fringy velocity. 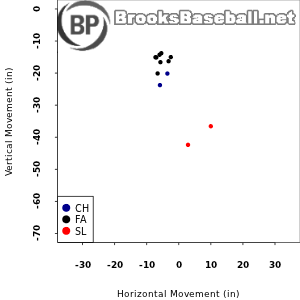 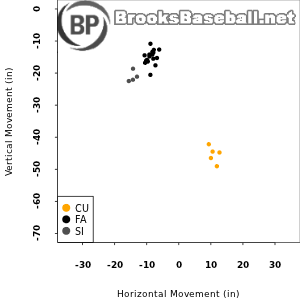 This is like judging a house after opening one door, but Valdez looks like a prospect from here. Let's open another door. Hey, wow, that 5.7 walks per 9 IP in the minors really sheds some light. Valdez pitched reasonably well in 2012, but it was his second trip through the California League. If he can find success in Double-A, he could turn into a reasonable relief pitcher, perhaps a solid set-up guy.

You need to be logged in to comment. Login or Subscribe
rweiler
Even if Kickham can only manage to throw a 91mph fastball, that's still 6mph faster than Zito's average fastball.
Reply to rweiler
drmorris
Your caveat about early-spring velocity is well taken, but the Kickham data aligns right-on with his scouting report.
Reply to drmorris