In What It Takes, Richard Ben Cramer calls adrenaline generated by postseason baseball "America's holy water." Cramer, who passed away earlier this year, never identified which nation ascribes divinity to liquids generated by the World Baseball Classic. Various pundits have spent the week suggesting it's not America. Very well. But say this about the WBC: It does spur curiosity when it comes to the styles of play, the quality of players, and the oft-confused alignment of players. In a sense, the WBC goes well with Richard Justice's chronicling of Jeff Luhnow.

Justice got Luhnow to speak on a number of topics, the most interesting of which revolved around analytics in amateur markets, specifically the international front. Luhnow provided what amounts to the money quote when he said, "My approach was that analytics has very little to do with it except for the fact you can study the market, understand what types of players have been successful. Are there common characteristics among those players that have been successful? Have they been signed at 16, 17, 18? Do they tend to be corner outfielders from the Dominican, shortstops from Venezuela?"

If we take the WBC's international feel and Luhnow's quote and combine them then we get questions like: Where are big leaguers coming from, anyway? Or the question pertinent to this piece: Where are the major-league starters coming from?

The answer is predominantly America, of course. As fraught as the amateur draft is with attrition, even among the top picks, the domestic crop of young players is exposed to more baseball and fewer hazardous conditions. Thus better and healthier players. Based on our depth charts and using a straightforward approach—the player with the most plate appearances is the starter—Colin Wyers whipped up the following table, which shows that the United States produced more than 60 percent of the expected starters at each position this season—except for shortstop.

The United States carries only a plurality of starting shortstops. It has become a worldly position, and things don't appear to be changing anytime soon. Just four of the 13 shortstop prospects in our top-101 list were born in the United States, while five total come via Puerto Rico or the Dominican Republic. Indeed, the D.R. is becoming a hotbed for quality shortstops, and so are other Central American countries. As a result, it's not hard to envision these countries producing more and more third baseman. After all, most third basemen are failed shortstops. True to form, third base boasts the third-lowest rate of American-born players.

Beyond third base, the position most likely to fall next is catcher. It stands to reason that teams with more international pitchers could opt for international backstops in the name of comfort. No team would take Ramon Castro over Joe Mauer because of ethnicity and native language. Offer them a choice between two equally talented (and priced) catchers, with one having the ability to communicate with the pitching staff more easily, however, and you couldn't blame the team for siding with the additional qualitative benefits. Yet at this point such a scenario appears to be little more than a false dilemma.

Despite increased international efforts over the past decade, the rate of American-born pitchers has remained consistent. At least when the perquisite playing time is 30 big-league innings in a season. As the graph below shows, the United States' grip on the mound remains strong, even if its grasp of other positions is beginning to slip: 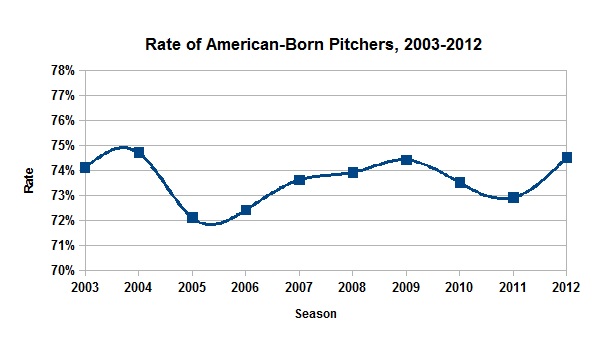 Whether the U.S. cares about the WBC or about international baseball is almost a non-factor. So long as the United States continues to support MLB it'll be supporting further development of the sport elsewhere on the globe. If not explicitly then implicitly, by continuing to provide revenue for teams to invest in non-domestic efforts to find new players. Americans may not bottle the liquids expelled during the WBC. But they are enjoying watching the lifeblood of Central American baseball play a good shortstop.

Special thanks to Colin Wyers and Tim Collins for research assistance.

You need to be logged in to comment. Login or Subscribe
kenraty
On an ever so slightly related topic: If the WBC is played every 3 years, and given that is was played in 2006 and 2009, why is it being played this year and not 2012?
Reply to kenraty
rawagman
The idea is to play every four years, but 2006 fell on an Olympic year. Not wanting to compete with that tournament, they shifted to '09 for the next and the four year cycle began from there.
Reply to rawagman