When I was a kid I loved money, and one of my first money-making schemes was to corner a market. I had heard about those brothers who (disastrously) tried to corner the silver market in 1980 and thought it sounded like a great plan that had probably just been executed poorly, so I wanted to execute a similar plan better. What I intended to corner was Kevin Mitchell 1989 Topps cards, chosen because a) I liked Kevin Mitchell, b) he was a good enough player that the cards naturally had some value and c) it wasn't valuable enough to be prohibitively expensive for a 10-year-old boy to acquire. YET.

I didn't know many people and there was only one card shop in town, so I ended up with around eight. It didn't move the market. This concludes the portion of this post that is about me. Thank you for indulging me.

Obviously, 6,000 copies won't move a market—I was 10!—but there is the possibility that it will move the Selling-to-Corey-Stackhouse market, and it has. He wrote about one eBay seller:

Since I started this blog, I've noticed a few sellers on ebay who seem to have also taken notice of this blog.  For instance, there was one who would repeatedly list single Wallach cards, like say, a 1988 Topps All-Star from the base set, at $5 on ebay.  Multiple listings of single, common Wallach's for $5 a pop.  Now, sometimes people list cards at crazy prices.  I assume its people who just don't know what they're doing.  Like if I was given a box of 1970's marbles, I wouldn't know how to list them or what to ask for.  So I checked their other items, and they didn't have any other $5 cards.  They had other cards, but they were priced in a half-way sane manner. Yes, I want all the Wallach cards out there.  No I will not pay $5 for a card that list for 1 to 8 cents.

I told a friend about this blog and he, quite sincerely, proposed selling 100 Tim Wallachs to Corey for $100. They would be the first 100 cards my friend has ever sold, and those 100 probably list for about $4, so the impulse to gouge is probably common. "I get a lot of offers from people through email," Corey told me. "I don't think most of them are trying to gouge me, so much as they are just ignorant to what cards are worth."

The other common impulse is to just give Corey the cards, which is what I'm doing. (I've got two sitting here with me now, but have many thousands of worthless cards to sift through to find the rest.)

"For the most part people don't ask for anything in return," he said. "They are surprisingly happy to part with their Wallachs for free. I always try to send something in return of greater value. Most people who bother to send cards are also collectors who have needs/wants, be it a player, team, or set they are working on. My collection includes more than just Wallachs, so I can usually find something to stick in an envelope. At some point I'm hoping someone shows up with some rare low numbered insert, like a 2005 Rookie Cup Relic, at which point I may have to actually negotiate beyond 'yes I want it.'"

His favorite is the 1983 Topps, the first one he ever got. "I declared Wallach my favorite player in '83. I was given a box of cards every year of my life by a family friend from the time I was born. 1983 was the first year I was anywhere near old enough to know what cards were. I was 3 and I liked the Expos uniforms, my brother's name was Tim, and per my Father, Wallach was a good player (he had a great season in '82). I insisted the Wallach be set aside with the other ones my father said were "good," Rose, Carew, et al. In '84 the Wallach got set aside again, and in '85, and by '86 I was old enough to understand cards, trade with friends etc. I had cards going back a few years of my favorite player and most kids my age didn't. It just grew from there."

There are an insane amount of cards left for him to get. It's impossible to know just how many, but in 1993 Donruss took the rare step of releasing its production run numbers. Donruss that year produced the equivalent of 496,364 sets, meaning there are roughly 496,364 versions of this card, 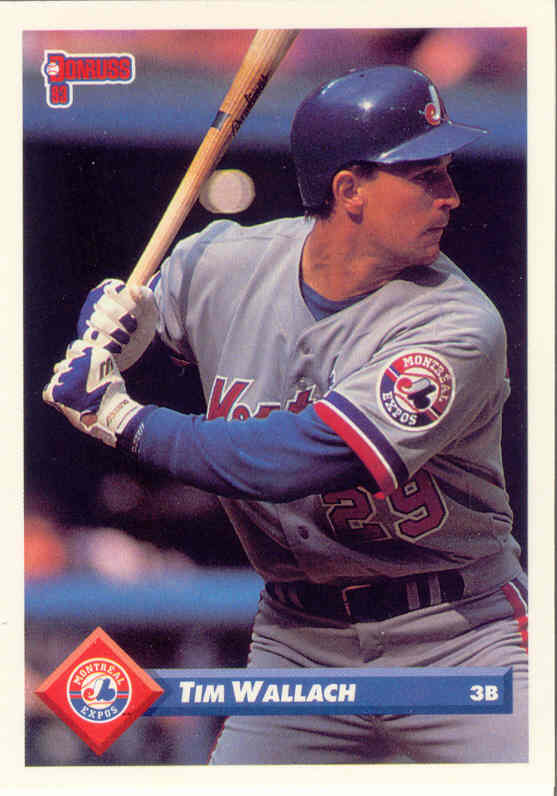 and that set was, according to Donruss, its lowest run since 1985. "I'm sure it's an obscene number that I'm nowhere close to," he said. "When I hit the 10,000 mark for a given card, investigating the total number will take on a higher priority."

Anyway, it's a great blog because of the premise, but also because Corey gives us an interesting tour through the baseball card industry in the 1980s and 1990s, of mass production, inserts, parallels, errors, low-quality giveaways, rare promotionals, and all the changes that were happening just before card collecting went askew. Some of Corey's most interesting posts:

You need to be logged in to comment. Login or Subscribe
sam19041
Nerdy but cool. Thanks.
Reply to sam19041
ORWahoo
Parks and Rec reference - nice!
Reply to ORWahoo
km9000
If I found out my new lawyer was collecting every single Tim Wallach card in existence, ever, I'd probably go from awe to confusion to let-me-explore-my-other-legal-options...
Reply to km9000
chabels
Gotta call Saul!
Reply to chabels
swarmee
Hmmm, nice reason to sort some of my long-forgotten but still taking up space 80s/90s baseball cards.
Reply to swarmee
jdeich
Fantastic and apt headline.
Reply to jdeich
dianagramr
This is ..... bizarre .... and wonderful!
Reply to dianagramr
dpease
I have over 600 Rob Deer cards. This piece reminds me that I need to account for them in my estate planning.
Reply to dpease
swarmee
You should have them buried with you. The concentrated wind gust will probably unearth your tomb years later.
Reply to swarmee
jdeich
Idea #1: If Rob Deer is still alive at the time of your passing, they get mailed to him.
Reply to jdeich
dpease
Well, I don't want to leave the kids out in the cold, with no Rob Deer merch of their own. Only one of them can have the autographed game-used bat.
Reply to dpease
Asinwreck
This reminds me of the guy who collects the Beatles' White Album. Thousands and thousands of copies of the White Album.

http://www.dustandgrooves.com/rutherford-chang-we-buy-white-albums/
Reply to Asinwreck
dianagramr
Wow .... now THAT is amazing, and something NOT that crazy.
Reply to dianagramr
km9000
I think the odds of Wallach card guy having a vinyl White Album are much better than White Album guy having a Wallach card, but man, that would be a mind-blowing trade.
Reply to km9000
swarmee
Did he ever hit a grand slam? I might be able to find a Denny's hologram card of him. I have already located 24 Wallach cards I'm mailing and I can't find my cards from the 80s.
Reply to swarmee
swarmee
http://timwallach.blogspot.com/2012/04/1991-dennys-12.html Answering my own question.
Reply to swarmee