Bullpen management: it’s one of the areas in which a major-league manager can make the most difference, and it’s also one of the areas in which we’re least likely to be satisfied with his work. But before we can pass judgment on a manager’s use of his bullpen, we have to know how he used it, and not just on an anecdotal level (although we agree that he made a mistake that one time your team lost a tie game on the road without using its rested ace reliever). On our Manager Pitching report, you can see how many relievers each manager used, and how many of those relief outings ended without a run being allowed. But that report won’t tell you who those relievers were, or when they were used.

That’s where BP’s new Bullpen Mis(management) Tool comes in. The BPM, which was inspired by this article, is the latest cool toy produced by Dan Brooks, the mind behind Brooks Baseball who also brought us the PITCHf/x Pitcher and Hitter Profiles, the PITCHfx Matchups Tool, and the PITCHf/x Leaderboards. It allows us to see the average Leverage Index when entering the game for all members of each team’s bullpen, both for a full season and over time.

Essentially, the BPM Tool allows us to see the story of a team’s relief corps at a glance. For example, let’s look at the back of the 2012 Dodgers’ bullpen (click to expand): 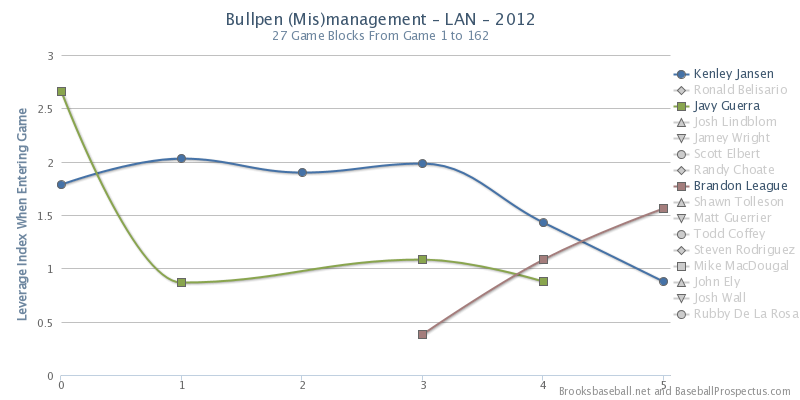 Here I’ve selected the three pitchers who got more than a single save for Los Angeles. Javy Guerra, the green leverage line, started the season as the Dodgers’ closer, so early on, he had the highest-leverage outings. But Guerra lost the job in early May to Kenley Jansen, whose blue leverage line rises above Guerra’s green one after the first block of games. (Guerra was sidelined by an oblique strain in September, which is why his line ends early.) Jansen saved his last game on August 18, after which he suffered from an irregular heartbeat and was replaced as closer by Brandon League, whose red line appears on the chart after his deadline trade from Seattle and quickly rises to finish the season above Jansen’s. I could have looked all of that up—okay, I did look all of that up, just to verify all the info—but I got the same sense of the season just by glancing at the graph.

By default, the top graph will display the three highest-leveraged relievers who saw significant time with a team, but you can click on the names in the right-hand column to select or deselect as many arms as you’d like. You can also change the number of data points—by default, the season is chopped up into 27-game blocks, with each of the six data points representing the average LI when entering the game over one of those blocks, but you can switch between seven levels of granularity by selecting any option from one game to 81 games in the dropdown. You can also choose to make the display start or end at a certain point in the season: set the Dodgers graph to start at game 136 or later, and Guerra won’t appear at all, since he didn’t pitch after that point.

And then there’s the bar chart (again, image expandable): 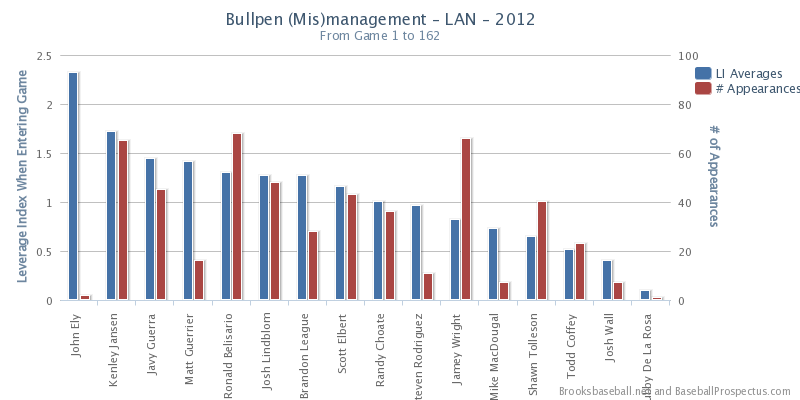 The blue bars represent each pitcher's seasonal average Leverage Index when entering the game, and the red bars represent each pitcher's total appearances. The pitchers are listed in order of descending Leverage Index, so you can see that among pitchers who made more than 20 appearances for the Dodgers, Jansen and Guerra had the highest LI values. Shawn Tolleson and Todd Coffey, on the other hand, were the mop-up men, combining for a full season of low-leverage work. You can mouse over any bar to see some popup text that tells you the LI and number of appearances for that particular pitcher.

Note that the buttons at the top right of each image allow you to print the charts and save them for posterity in some sort of scrapbook, or export them as PNG, JPEG, PDF, or SVG files for easy uploading and viewing on your own site.

In this case, we’re using Leverage Index values calculated by Colin Wyers. Leverage Index is meant to measure how suspenseful or pressure-packed a situation is, and it varies based on the inning, score, number of outs, and runners on base. An average LI is 1.0; the higher the leverage, the more nail-biting the outing. But keep in mind that Leverage Index is more of a descriptive stat than one that lets us pass judgment on how intelligently a manager assigned his relief innings. Because Leverage Index assigns more importance to outings late in a game, a situation in the ninth inning—up by one run, with one out and a runner on first, let’s say—will have a higher LI than an otherwise identical situation in the eighth. So a closer will tend to have a higher Leverage Index than a setup man, even if the setup man is used in equally “important” situations (reputed pressure of pitching the ninth aside). 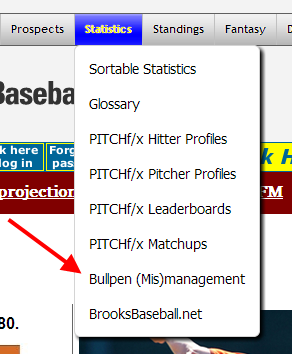 Right now, the report is populated with data for both 2012 and 2011 (you can select the year you want to see at the top), but we’ll be updating it daily once the 2013 season starts.

Thanks to Rob McQuown for technical assistance.

The bar charts would become OUTRAGEOUSLY AWESOME if there was also a bar represnting some index of effectiveness. This would help us see whether managers are maximizing the highest leverage situations to their BEST relievers, not just their most frequently used.
Reply to ScottBehson
KerryHofmeister
I second this!

I am a huge fan of the way that BP is always pushing forward making a great product even better.
Reply to KerryHofmeister
dianagramr
This is statistically significant.
Reply to dianagramr
mrenick
When people aren't happy with recent changes they almost always post about their displeasure. Allow me to say this looks like it will be fantastic tool. Thanks.
Reply to mrenick
jlebeck66
Just adding a "this is cool" to the comments. Thanks.
Reply to jlebeck66
rawagman
Very awesome.
Reply to rawagman
Flatfoot
Where do the parentheses go?