What if you’d been asked back in 2003—following the greatest season since 1950 for aging hitters—which position players in their prime would be the likeliest candidates to enter 2013 as the best old guys? Sure you’d have predicted Derek Jeter, but Nomar Garciaparra and Miguel Tejada would have been in the same sentence. Ichiro would have come to mind too, since he’d have seemed like someone who’d probably age okay, but Bobby Abreu, Johnny Damon, and Manny Ramirez would have been popular outfield picks as well. Even if you knew Chipper Jones would be retiring with something left in the tank, there was still a third baseman on the board. Edgardo Alfonzo, a seven-win player in 2000 and a five-win player in 2002, is even younger than Jones.

No matter whom you picked, you mostly would have been wrong, and through no fault of your own. It’s just the worst time in decades for older players. Jeter had a pretty good 2012 until he had to be carried off the field at the end, and Ichiro found a little life after the trade from the Mariners to the Yankees, but that’s really about it.

In 2002, hitters in their age-37 seasons and up combined to produce 39.7 wins above replacement player, and that figure stayed above 30 wins as recently as 2007. But since then, it’s cratered, and the 2012 figure of 3.5 total WARP for all age-37-and-up position players was the lowest since 1984. The natural inclination would be to say that the change can be attributed to drug testing, but it’s come with a whole change in the offensive environment, with speed increasingly emphasized and bat-only players in less demand. 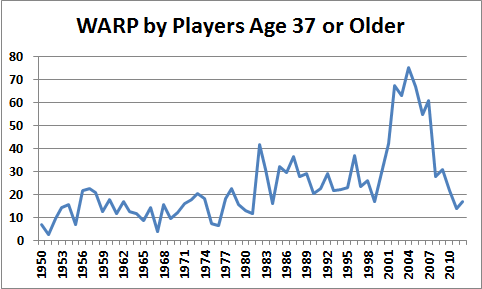 Most of the names mentioned at the top retired or faded quickly. Some others hung on with poor results—Todd Helton and Hideki Matsui were a win or more below replacement level last year. Others march on strongly, returning for their age 38-plus season with some hope of contributing to their teams

With Jones calling it a career, most of those remaining are in the Bronx. While the Yankees have been slammed for hoarding old players, at least their collection includes those with some shot at making a positive impact.

Here are PECOTA’s very Yankee-heavy PECOTA picks for the most valuable players to return from a wreck of a year for older ballplayers.

Is it weird to think that the seven home runs would be a little disappointing after he hit five in 240 PA after the trade, taking advantage of Yankee Stadium’s short right field fence? Either way, the power is just a bonus. Ichiro is still the most valuable old-guy position player, mostly because he doesn’t run like an old guy yet.

The 17 position players in the system who are entering their age-38-or-older seasons project to a combined -1.1 baserunning runs. The breakdown:

Hell, Ichiro’s first PECOTA comp listed at this point in his career is Kenny Lofton.

Unlike Ichiro, Jeter’s value is all in the bat. He’s a negative baserunner, a very negative fielder, and he’ll get no help in either of those areas from his season-ending ankle injury. But the bat is good, and most importantly for a low-power guy, the BABIP has stayed consistently good (.347 in 2012, .354 career). And with an old guy with a bat, you get milestone chases.

Jeter led the major leagues with 216 hits last year, giving him a second AL crown 14 years removed from his first and raising his career total to 3,304—403 more than the closest “active” player, Alex Rodriguez. Assuming good health, he’ll enter the top 10 all-time, passing Eddie Collins and Paul Molitor within a week in April to take over ninth place, then topping Carl Yastrzemski, Honus Wagner, and Cap Anson in rapid succession late in the season. The only question is whether he’ll get the 211 hits he needs to push Tris Speaker out of the top five this year.

In actuality, his projected 2012 stats are [N/A] because right now Big Jim doesn’t have a place to mash his taters. But sure enough, his remaining power, if deployed correctly, could turn him into almost as valuable a player as Jeter.

The funny part is how this position player list could have all been Yankees. When the Bombers wanted someone with no other skills to just stand on the left side and bomb, they went with Travis Hafner, projected for just 0.8 WARP in 339 plate appearances.

We could have conducted the same exercise with pitchers: Who would have been the top candidates to be productive old-guy pitchers now, from the perspective of 10 years ago? Pedro Martinez would have been mentioned. Brad Radke was a candidate to defy age. Matt Morris, maybe.

Kuroda was still five years away from coming to the U.S., and he tops the projections for 2013 at age 38. He has been fantastically consistent even with the league switch in his five seasons in the majors. Hits per 9 between 8.3 and 8.9 every season, BB/9 between 1.8 and 2.2 every season, and K/9 between 6.7 and 7.3 after a 5.7 in his debut. Leaving Los Angeles to pitch in Yankee Stadium, a better hitter’s park, and post his most valuable season yet makes Kuroda’s consistency all the more impressive.

PECOTA’s souring on Dickey really takes root in the strikeout rate, where the National League leader in raw strikeouts is projected to drop from 8.9 K/9 in 2012 to 6.3 K/9, which is exactly his career rate. No, the success was not out of nowhere in 2012, but the strikeout rate was.

Dickey still has a very good shot at higher value, and that’s nothing new for aging knuckleballers. Phil Niekro averaged 7 WARP in his age 38 and 39 seasons, and either of those seasons would have easily led all pitchers last year. It would be a new experience for the Blue Jays if Dickey were successful, as they’ve never had a two-plus WARP pitcher over 37 in their franchise history, and only two who were exactly 37, Jack Morris in 1992 and David Wells in 2000.

Okay, you might have guessed that these guys would hold up all right, too.

You need to be logged in to comment. Login or Subscribe
timber
I'd also like to nominate Torii Hunter, who will turn 38 in July and is projected for 2.3 WARP.
Reply to timber
DetroitDale
I will second that nomination and point out that Torii's gonna be hitting behind Austin Jackson and ahead of Miguel Cabrera and Prince Fielder
Reply to DetroitDale
shower30
I think PED use must still be considered the cause of the decline in older player productivity. Even though the transition to speed is mentioned, I think that transition is happening because of the decline in power hitters due to declining PED use. Additionally, we wouldn't see the decline in pitching if this were do to a power-to-speed transition alone.
Reply to shower30
anderson721
Well, if one includes greenies as well as steroids, a possible explanation for the falling productivity of "elderly" players presents itself.
Reply to anderson721
morenobasspro
It's Barry Bonds wrecking that curve, right?
Reply to morenobasspro
aaronbailey52
I don't recall him as a 40 win player... Without fact checking, I'll bet Bonds + Clemens + PEDs = 12 applicable WARP in one of those years
Reply to aaronbailey52