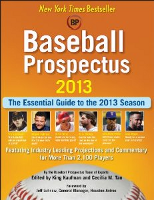 Baseball Prospectus 2013 is landing in mailboxes and e-readers everywhere this week. I see the tweets popping up all over. I can now say to my friends, "Now you know what I did all winter."

In case you don't already know, Baseball Prospectus 2013 is this season's edition of the most complete guide to Major League Baseball you can buy. It's almost 600 pages of the data and projections for players and teams you need, whether you are trying to win your fantasy league, get a handle on what your team is doing (or failing to do), or just stay one step ahead of the color commentators trying to figure out what to say about that guy who got called up.

Building the annual is a little like building a baseball team. You spend all winter on it, sweating the details and hoping it all works, but until it gets out there, you don't know how it'll do. Well, the book hasn't even been out a week and, as this is written, is holding both the no. 1 and no. 2 slots on Amazon's baseball bestsellers list (with the paperback and the Kindle version), and is at no. 60 in all books (and climbing). Past volumes have reached the New York Times bestseller list as well, so I feel pretty good that we've got a winner on our hands.

We like stats, and chances are that if you're reading BP, you do too. So here are some numbers to note about this year's book.

But you want to know what's in the book. Last year we correctly predicted down years for Jose Bautista, Josh Beckett, and Jeff Francoeur, and playoff runs for Cincinnati and Washington. What are some of the subjects we're looking at this year?

(I can't tell you the answers here: you're supposed to go look them up in the book. No spoilers.)

As I mentioned above, the book is available not only as a paperback, but in ebook form, and as a mobile app. I loaded the app onto my phone before I left for spring training last year, and it instantly made me a one-woman scouting department in the stands. I had a scouting report right at my fingertips for nearly every random replacement player who got a late-inning at bat after the star players had headed for the golf course. The same was true all throughout the season. Now I can't imagine living without it. Is that veteran my team just got as insurance washed up or does he have something left in the tank? What's that hot prospect's big weakness? Our rotation's in trouble… or is it? Whether I was sitting in the stands, or in a sports bar, or watching the game with friends at home, I no longer had to wait for the color commentator to tell me about a player, and instead of some factoid, I could see the stats that matter.

That's the reason the BP annual sits on the desk of many big-league general managers. One of them, Houston's Jeff Luhnow, wrote the preface to this year's book, in fact. I feel like the only thing snazzier than having BP on my phone would be Billy Beane's Blackberry.

The core of all the numbers we provide in the book is PECOTA (Player Empirical Comparison and Optimization Test Algorithm). Developed by Nate Silver, whose prominence as a big data guru reached new heights in 2012 with his success in predicting the Presidential election, PECOTA is continually tested and updated. Each player in the book has a 2013 prediction in each of 19 different statistical categories. (If you have the app, and technology works as it should, you should even see these predictions change throughout the year, just like you do on the BP website.) Some of these are "traditional" stats like wins, batting average, and ERA, while others are advanced metrics like TAv, FIP, and of course WARP.

There's also the Top 101 prospects feature, which used to be written by Kevin Goldstein. Since he has been lured away to a job in The Show by the Astros, Jason Parks took over curating the list this year, with input from six more of BP's brightest.

I had a fantastic time co-editing the book with King Kaufman. I couldn't be more excited that now it gets to be in your hands, and be your companion all season long. A huge thanks to everyone on the team. Now it's time to play ball.