Neal Huntington has taken a curious approach over the past year to fixing his lineup. At the trade deadline Huntington netted a collection of irksome veteran hitters with uses during their upswings and too many downswings to overlook. The rationale explanation—and an understandable one, at that—was Huntington had no desire to spare his best prospects while chasing fleeting odds at the postseason. The offseason has since come and gone and few positional player additions were made. Two new faces are expected to make the opening day roster in Russell Martin and Brandon Inge: veterans known for their gloves. Pardon Pirates fans for not sitting rapt in anticipation to see the same group that has scored the fifth-fewest runs in the league since 2011. What makes Huntington's gambit riskier is the status of the one pure upside play in his lineup: Left fielder Starling Marte.

Though Marte predates Huntington in the organization—having been signed by the previous regime months earlier—the Dominican Republic native is a testament to the Huntington regime's patience, and one of the first big-league-ready talents emerging from Pittsburgh's praiseworthy international efforts. The tools-laden perpetual breakout candidate broke out and appeared three times on Kevin Goldstein's prospect lists on the way to making his big-league debut last season. Even now, as a 24-year-old, Marte remains a fascinating talent.

An athletic dynamo, Marte has well above average defensive ability in center field thanks to plus speed and a good arm. The potential for excitement is there on the offensive end as well. Marte's hit tool grades out as at least a five while his in-game power is likely to fall around a six; there's a real chance he joins the 20/20 club during his prime seasons. But if the hit tool enables the power tool then the plate approach empowers the hit tool. A context-free examination of Marte's tools suggest he's a good hitter. In reality the marriage between his approach and tools complicates matters and deflates Marte's production as he's overconfident in his bat-to-ball skills to the point where it hurts him. Like on this 1-1 curveball from Ben Sheets: 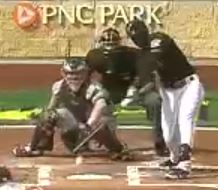 You can find instances of foolishness from any pitcher or hitter. But Marte's willingness to expand his zone for poor pitches—those of the bendy variety in particular—was evident throughout his first tour of duty. Consider the PITCHf/x chart below. It comes from a September 10th at-bat against J.J. Hoover during the 13th inning. Marte took an ugly upper-body swing at the first pitch (a fastball low and away, a little off the plate), took the second pitch (another fastball, this one closer to the zone) for a strike, then took an exaggerated version of the first swing at the worst pitch of the at-bat (a temptation fastball well off the plate away). If you didn't know any better you'd think Marte quit on the at-bat. 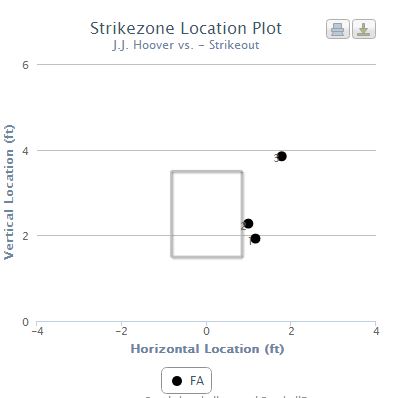 Fretting over three months of data is silly either way. Still, it's worth noting Marte's strikeout rate increased in each subsequent month. This despite seeing a higher rate of fastballs during the final month-plus than he did in July. The end result was a strikeout-to-walk ratio of 6. While it's a crude measure of plate discipline, there are more successful cases of a young player improving his strikeout-to-walk ratios (like Delmon Young—don't laugh, he improved his rate from 24 to 5—Michael Saunders, and Franklin Gutierrez) than cautionary tales of players getting worse (like Corey Patterson and Jeff Francoeur) in the year after.

Curiously, the Pirates intend to use Marte as their leadoff hitter. No one outside of the organization can be sure of their motive, here's a thought: What if they think batting Marte in the top slot can persuade him take a better approach at the plate? That could be giving Pittsburgh too much credit. Marte is fast, which fits the bare-bones criteria for a leadoff hitter, and the Pirates lack true alternatives. They can't hit Andrew McCutchen or Pedro Alvarez at the top and Neil Walker lacks the necessary speed. The concept of giving a player a psychological nudge is not a new one, however, and Pittsburgh might feel the best way to evoke a better approach from Marte is to force it from him.

Whether the plan works will go a long way in determining if Huntington's confidence in internal growth was well-placed, as Marte's role as leadoff hitter makes him a key figure in theory and execution. While he's unlikely to develop into the superstar talent that dreams are made of, marginal improvements in strike zone management and pitch selection would help round out an impressive skill set. Factor in Marte's defensive and baserunning abilities and Pirates fans should enjoy having him around—even if he's not the big bopper they'd like added to the lineup, and even if they had to wait on him to arrive.

You need to be logged in to comment. Login or Subscribe
prs130
more likely you're persuading the opposing pitcher to throw strikes. nobody wants to walk the lead-off hitter.
Reply to prs130
frankopy
only a tad of roberto would be welcome...if more, fine
Reply to frankopy
blcartwright
Marte's a very fast line drive hitter with developing power. It's just that strike zone judgement thing. I sat behind home plate for several games in Altoona in 2011 and in general looked better than what I expected from his previous stats. Yes, there were some ugly PA's for the Bucs this past summer but Marte did lead the Dominican Winter League in wOBA for combined regular and post season, with his highest walk rate ever in the DWL (7.1% in 178 PA)
Reply to blcartwright
villapalomares
"They can't hit...at the top and Neil Walker lacks the necessary speed." Brian Downing says hi.
Reply to villapalomares
blcartwright
If Tabata and Walker can put up 340-350 OBs I'd put them 1-2, regardless of lack of blazing speed, the Marte something like 6th
Reply to blcartwright