Last year, Baseball Prospectus introduced the Scoresheet Draft Aid to help Scoresheet Baseball players with their drafts. And many got to see a free trial last March. Since its inception, the most common piece of feedback by Scoresheet players who have used it is that it's "too good" and that it levels the playing field, erasing the edge that can be gained by an opponent through hours, days, or even months of research. This year, BP has welcomed Tim Collins, a new member of the tech team who is helping make it even better than the inaugural edition! So, look for upcoming improvements, including incorporation of the new prospect rankings by Jason Parks.

First, a recap of the basic functionality: Scoresheet Draft Aid is a tool to help with Scoresheet Baseball drafts, powered by PECOTA. (And remember that any "/fantasy" URL on the site can be accessed using "/f" instead, which can be useful for avoiding filters). To find the Scoresheet Draft Aid in the future, simply click on "Fantasy" on the main menu, which takes you to a page with this sub-menu: 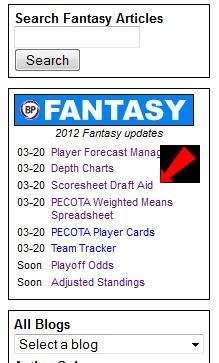 For those who don't know much about Scoresheet Baseball, it's a simulation game with the current season being the basis for the simulation results, giving it the excitement of fantasy baseball combined with the realism of a simulation game. The site (http://www.scoresheet.com) offers a lot of information to help new players become familiar with the game, including how to order a team (there's a much-reduced price for newcomers) and even a recent Podcast with yours truly. Many public league drafts will be starting on March 1, so if you're interested, now is a great time to try it out.

But I'm not here to plug Scoresheet baseball, I'm here to help people WIN at it. To do that, I'll walk through the first steps I took to prepare for my NL Public League (#300):

People who are familiar with Team Tracker will find that loading a Team Tracker team from a Scoresheet team (an automated process described in the initial article about Draft Aid) in one window is a good starting point.  After that, I open another browser window, pull up the new Scoresheet Draft Aid, and select my league from the pulldown box there: 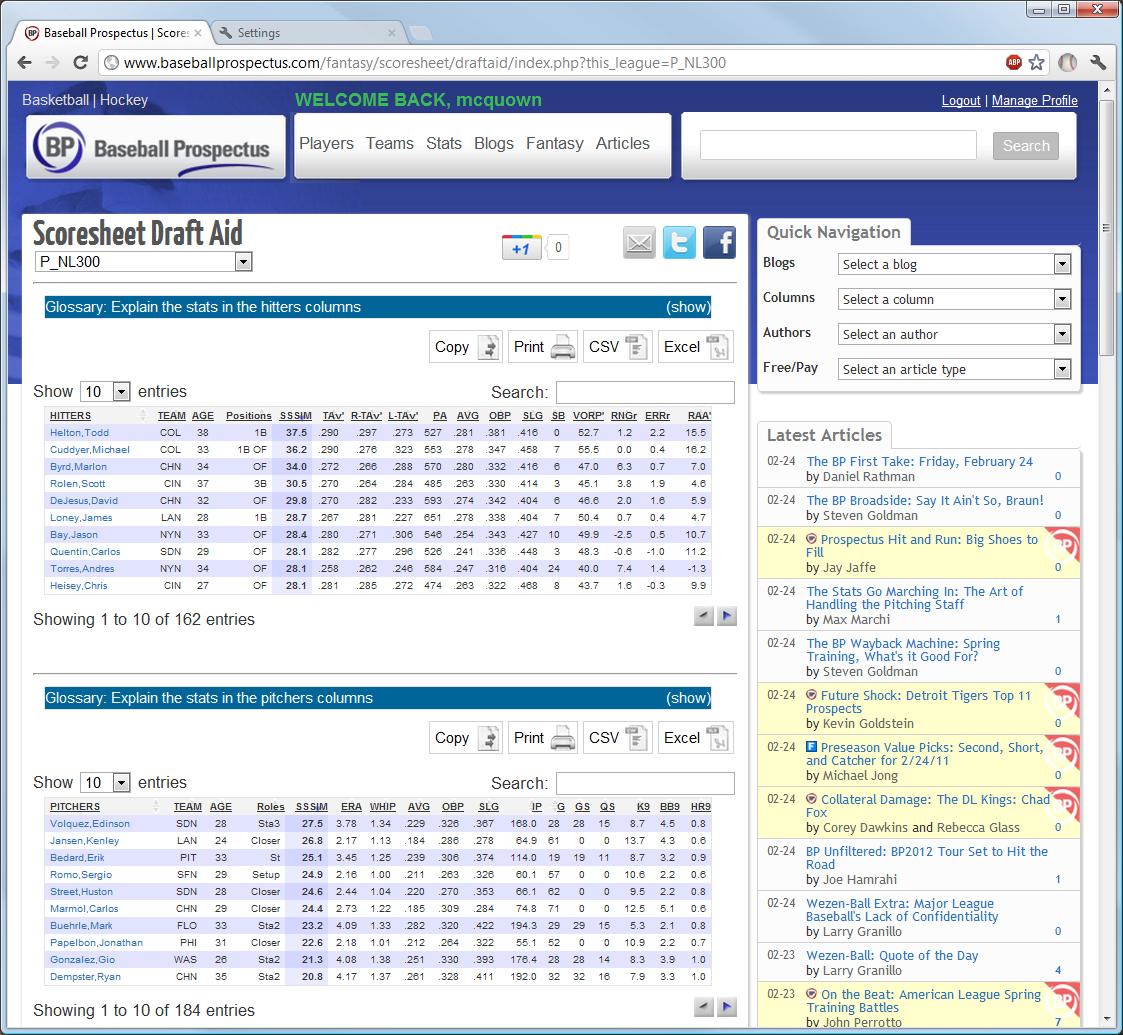 If I click on "(show)" by the Batter Glossary entry, it explains some of the new stats: 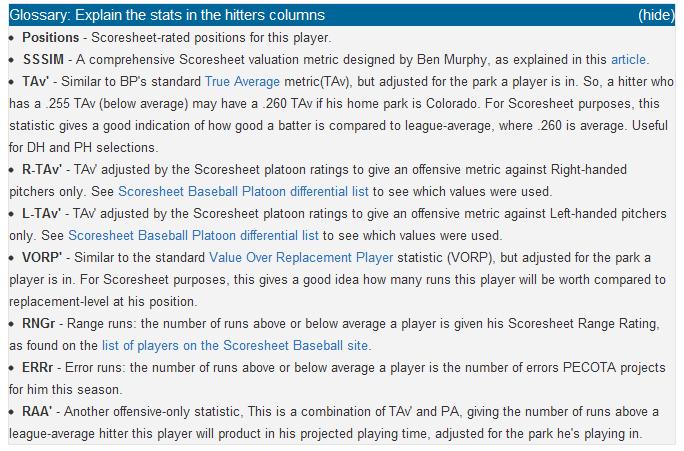 It's best just to dive into the Draft Aid and experience it for yourself—for Scoresheet owners, notice that only the players available in your chosen league show up. The columns can be sorted by whichever stat is needed (my personal favorite is R-TAv, though Ben Murphy prefers SSSIM). The display can show as few as 10 or as many as 100 players. For spreadsheet addicts, it can be exported to your favorite format. Obviously, the biggest advantage comes for the Scoresheet game system, since a couple factors are built into the product—righty/lefty platoon advantages and defensive range—and a specific league can be loaded. But for people who don't have a Scoresheet team, choosing the top option ("(Select Your League Below)") displays all players and gives an interesting perspective on future value for baseball players in general, and also for fantasy games and other simulation games such as Strat-O-Matic (though there's always the delayed gratification of waiting an entire year to see how the cards look in that type of game).

NOTE: After the initial release, two powerful new features were added to the Draft Aid program, and will be available again soon in 2013, though with Jason Parks' prospect lists instead of Kevin Goldstein's:

#1 Prospects, courtesy of Kevin Goldstein (example is taken live from P-NL300, a league I participate in): 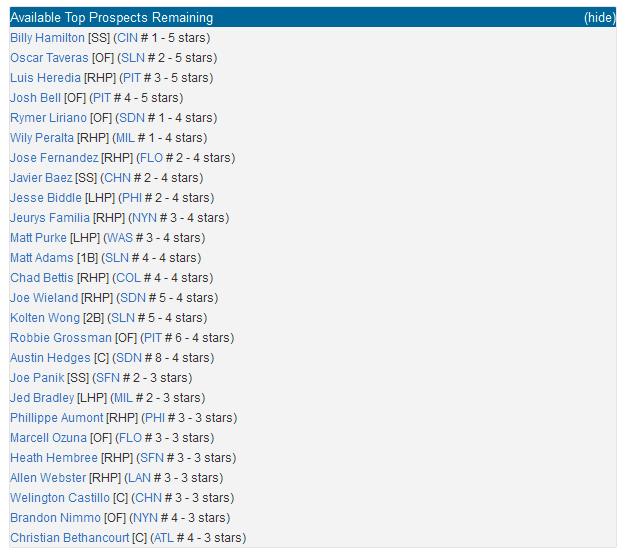 #2: Spring Statistics (reached by clicking the link labeled "See Spring Stats for these Players" under the Scoresheet Draft Aid heading):

With apologies to Scoresheet owners who are losing their edge, we hope everyone enjoys this feature with their Fantasy or Premium Subscription and excels not only in the preseason draft, but also during the tricky in-season drafts as well. Not a subscriber yet? Just click here!

You need to be logged in to comment. Login or Subscribe
jj0501
Thanks, Rob. Many Scoresheet players, like myself, appreciate this very much. I look forward to this year's Sean Doolittle, and other hidden gems amidst the mine field of supplemental drafts.
Reply to jj0501
vydra3
I also really like this tool, really valuable for those who play Scoresheet. But it doesn't seem quite ready yet - missing data for players (Trout not in top 100?), the Excel export doesn't work (need to save as file, and use Excel import tool), and the league selection doesn't seem to adjust the list except by AL/NL.

Reply to vydra3
mcquown
I'm investigating now about Trout - player lists are being pulled directly from an application provided by Scoresheet Baseball for this purpose, so there's no inherent reason for anyone to be missing.
Reply to mcquown
mcquown
Individual leagues should work, but with multiple users using the system, the "*" league isn't working correctly for now. Working on a repair now.
Reply to mcquown
mcquown
Should be much better now - sorry for the inconvenience.
Reply to mcquown
vydra3
I can confirm the Excel export works now. And I see Trout and more players, so the data feed issue also looks to be fixed.

However, I don't think the league aspect (where it omits players based on grabbing rosters from Scoresheet) is yet ready, I am guessing most lists shouldn't have MCabrera or Trout at the top since they were protected in most leagues.
Reply to vydra3
mcquown
It was working earlier, I changed some stuff to make the "*" leagues work okay. Will have it restored in moments.
Reply to mcquown
jj0501
I'm seeing all players for my public AL league, not just the available. Did something change from last year or did I forget to do something ? Thanks.
Reply to jj0501
mcquown
Player lists should all be okay now.
Reply to mcquown
digiderek
Really? I'm totally empty player lists and empty spreadsheets.
Reply to digiderek
digiderek
Er "I'm GETTING totally empty player lists..."

I'm not empty. I just had breakfast. :P
Reply to digiderek
mcquown
League?
Reply to mcquown
mcquown
Ah, I see - another problem with "*" leagues - fixing now.
Reply to mcquown
digiderek
Just tried again and it's working for me!
Reply to digiderek
mcquown
Alright, we're still showing a few players as available who are not, such as Mike Napoli in my BL_Kings league. This appears to be something involving the interface with the Scoresheet site, and we're in contact with them. But otherwise, things should be golden now.
Reply to mcquown
mcquown
Mike Napoli and Shaun Marcum and some other "name" players are "X" players on the Scoresheet site. Those will show up as "available" in every league, but this will sort itself out as Scoresheet gives these guys player numbers.

It's working as designed, so be sure to double-check your Scoresheet league page if someone is available who probably shouldn't be.
Reply to mcquown
lyon812
I must be missing something, because I don't see the options to choose "#1 prospects" or "spring training stats". Obviously, there aren't any ST stats yet, but the prospect list would come in handy. Is this something coming later?
Reply to lyon812
mcquown
Yep, as noted: "[...] look for upcoming improvements, including incorporation of the new prospect rankings by Jason Parks."
Reply to mcquown
elsrbueno
Jason's top 100 prospects will be a feature added in a future iteration. Get excited!
Reply to elsrbueno
lyon812
Very excited. =) Thanks for clearing this up, I look forward to it!
Reply to lyon812
brooklyn55
Rob - this is golden! Hope you can hear the applause.
jdm
Reply to brooklyn55
tpollex
This is great. However, when I select two of my leagues (NL JABO and NL Double Steal) no players are listed. When I select a different league it does load.
Reply to tpollex
mcquown
Got the problems with those league straightened out. Sorry for the trouble.
Reply to mcquown
tpollex
No trouble at all - this is a great tool!!
Reply to tpollex
Oleoay
This rocked for me last year. As an aside, I also had Tim Collins on my Scoresheet team ;)

Didn't protect him as a keeper though...
Reply to Oleoay
elsrbueno
unacceptable!
Reply to elsrbueno
smallflowers
Thank you Rob!
Reply to smallflowers
dd131005
Not working for my new subscription. Can't see any players for NL_Pure_Prarie.
Reply to dd131005
elsrbueno
this should be working now
Reply to elsrbueno
dd131005
work now. Thank you!
Reply to dd131005
dfloren1
Why is Nakajima's LTav' higher than his RTav'? Scoresheet doesn't list Nakajima's platoon splits and all right-handed hitting Scoresheet rookies get the standard split for all rookies (i.e., vs RHP .001, .024, .021; vs LHP -.004, -.010, -.009). Unless I have bad info, shouldn't the BP SS draft tool rely exclusively on the SS platoon split multipliers when spitting out projected LTav's and RTav's based on any basic Tav BP projects for any SS rookie? When you click on the SS platoon splits links in draft aid glossary entry under LTav' and R'Tav, there is no Nakajima platoon split to be found. In that case shouldn't the default split apply to all right handed hitting SS rookies like Nakajima? And I was getting all excited about draft tool's projected .281 LTav' for Nakajima! Look, I know it's even more difficult to project MLB performance from NPB imports than others, but my question relates solely to how the calculation is being made.
Reply to dfloren1
dfloren1
Doh! You can now completely ignore my question. I answered it! My info was indeed bad ... I inadvertently inverted the default SS platoon splits for rookies. AND, in my cloud of self-imposed confusion, I forgot to thank you guys for such a great draft aid.
Reply to dfloren1
mcquown
From the Scoresheet site, the adjustments are:

http://www.scoresheet.com/FOR_WWW/LR_diffs.txt
Reply to mcquown
digiderek
Derek Norris is forecast to have 523 at bats? Doesn't that seem a bit on the high side?
Reply to digiderek
mcquown
Forwarded this comment to dc@baseballprospectus.com
Reply to mcquown
digiderek
Of course, I should have typed plate appearance rather than at bats. Still seems high to me. Also, I'm curious to know how Daniel Nava is projected to have 642 plate appearances.
Reply to digiderek
elsrbueno
Derek-- Thanks for your feedback. Norris is projected to get the lion's share of time at catcher this season. A thing I did miss on was giving Vogt a little time, which I'll rectify in my next update. Good catch.

As far as Nava goes, he's the beneficiary of both being on the right side of the platoon in left, but also being versatile enough to play first, and right field. With CF a little uncertain and the chance Victorino plays there more frequently than in 2013-- I see Nava getting a lot of time in those 3 spots. Additionally, his PAs are boosted by spending a lot of time at or near the top the lineup.
Reply to elsrbueno
digiderek
As a Derek Norris owner (and Oakland A's fan), I hope you're right but I still think you're being overly optimistic about Norris this year. He's been dreadful against right handed pitching and until that changes I have to think that Vogt will get the majority of ABs. Of course, time will tell and I do hope I'm proven wrong.
Reply to digiderek