The local SABR chapter held a garage sale on Saturday, and I couldn't resist. I bought an old-school Padres cap and an Oklahoma City RedHawks cap for myself. (I'd stopped to see a RedHawks game while driving from San Diego to Cooperstown for Tony Gwynn's Hall of Fame induction in 2007.) I bought a Fresno Grizzlies cap for my wife. She likes bears.

I reminded her that the Grizzlies are a Giants affiliate. She still likes bears.

I also picked up two books. One was John Thorn and Pete Palmer's The Hidden Game of Baseball, which I'm embarrassed to say I've never read.

The other was the San Diego County Baseball High School Guide 2000, which I'm less embarrassed at not having read on account of never having heard of it before the garage sale. (My wife found it, which makes her wearing Giants-affiliated paraphernalia more, uh, bearable.) It's a fascinating read, featuring players to watch, team rosters for the upcoming season, and seasonal and career records.

Plus the cover could be a Godzilla movie poster. 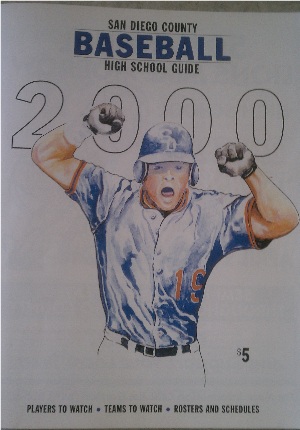 None of those guys made it to the big leagues, but the first pick did. That would be Adrian Gonzalez. From the Guide:

Metro League, CIF-San Diego Section and San Diego Union-Tribune Player of the Year last season after batting .566 with 15 HR and 55 RBI. Also went 6-0 on the mound for the Titans. Rated the No. 26 prospect in the nation by Baseball America.

In the roster section, Eastlake coach Dave Gonzalez said that Adrian would be “bigger, stronger and faster” in the coming season. Those first two seem plausible, but if you've ever seen Adrian run, you may have your doubts about that last claim. Then again, people change. The book notes that as of its publication, Eric Chavez held the San Diego high school records for stolen bases in a single season (50 in 1995) and career (115). Considering that Chavez has swiped 47 bags in nearly 1,500 big-league contests, that's a bet most of us would have lost.

Others in the Players to Watch section have made it to The Show. Lefty Matt Chico spent 2007 in the Nationals’ rotation before injuries ended his career. He was better known as a hitter in high school, having batted .406 with four homers and 13 RBI in 1999.

Anthony Gwynn, who didn't become Tony Jr. until turning pro, has spent some time in the big leagues. So has right-hander Wes Littleton. And you may be aware of Carlos Quentin:

First-team all-CIF and San Diego Union-Tribune all-county selection last year after batting .427 with 7 HR and 36 RBI. Rated the No. 92 prospect in the nation by Baseball America.

Or, if you'd like to see that with a little bit of Wheatland's left thigh in the lower right corner:

Seven homers in 1999 was a respectable total for Quentin, who played center field for the Dons, but it was well off the USDHS record of 15 set a year earlier. The kid who'd set the record would also play in the big leagues: Mark Prior.

Others to watch include two guys who later played at SDSU under Tony Gwynn Sr. Rielly Embrey hit the first home run in Petco Park history, in a college game. Left-hander Daryl Harang is the younger brother of Aaron Harang, who currently pitches for the Dodgers.

The Mount Miguel Matadors fielded a future big-leaguer: “Calling the game from behind the plate is three-year varsity player Jeff Karstens.” After three pitchers are named, there is this addendum: “Karstens also will be counted on to pitch.”

A teammate of Heard and Wheatland at Rancho Bernardo HS was Jake Blalock, younger brother of former Rangers All-Star third baseman Hank Blalock. Another teammate, sophomore southpaw Cole Hamels, was not among the 12 of 18 Broncos who got a brief writeup in the blurb accompanying his team's roster.

The Santana Sultans featured a sophomore pitcher of their own. Hayden Penn got a writeup and later spent a brief but miserable time in the big leagues. Santana HS has produced a few big-leaguers, most notably left-handed relievers Terry Forster and Joe Price.

When the Guide was published, Forster owned the eighth lowest single-season ERA in San Diego high school history. Fourth on the list was Point Loma's David Wells, who also had the most shutouts in a season and career, as well as the most consecutive shutouts. Wells had 162 strikeouts in 1982, third-most in city history at the time. He did not appear on the career strikeout list, nor on the career or season wins list.

It was inevitable that Bob would become a catcher, as that's what Crawford players do. Of the eight Colts to reach the big leagues, five were catchers: Tim Blackwell, Boone, Dave Duncan, Dave Engle, and Ed Herrmann. The other three were pitchers Chuck Rainey and Dick Woodson, and an outfielder named Jim Nettles, brother of Graig Nettles.

The leaderboards are littered with big-leaguers:

Well, that's what it looked like in 2000. Some of these records may have been broken since the Guide was published 13 years ago, but as snapshots go, this one is fascinating. So go watch your local high school team some time. You never know who you might see or where they might turn up next.

You need to be logged in to comment. Login or Subscribe
zasxcdfv
You drove from San Diego to Cooperstown? #80want
Reply to zasxcdfv
gyoung858
I wouldn't have missed it for anything... one of the coolest experiences I've ever had in life.
Reply to gyoung858
wonkothesane1
I think Hamels missed that season with a broken arm. I know he missed one season that way. I went to Rancho Bernardo High and didn't even know who he was until he burst onto the scene following the injury. Saw him pitch a few times in high school. Unhittable.
Reply to wonkothesane1
wonkothesane1
I know that the "HRs, season" record has been beat a few times. Most memorable for me was Danny Putnam, who also went to Rancho Bernardo High School before playing the OF at Stanford with Carlos Quentin and becoming a supplemental 1st round pick by the Athletics.

I remember it getting beat again the next year. Although, I can't recall the name. He was a big first baseman.
Reply to wonkothesane1
gyoung858
Thanks for all the additional information. I don't have the book handy right now, but I believe Putnam is at least listed on the Rancho Bernardo roster.
Reply to gyoung858
wonkothesane1
To give another idea about how much the Home Run records have changed. I don't know who the current record holder for career Home Runs is, but Rancho Bernardo's John Drennen became the San Diego and California record holder in 2005 with 47. A lot more than Graham Koonce's 31.
Reply to wonkothesane1
AvengingJM
And I believe Jaime Jones (also from RB 92-95)is up near the top as well. I was at the game where Putnam set the record at the time. I believe he hit 2 that day, 1 to tie, and 1 to break the record.

Time does play tricks, though.
Reply to AvengingJM
wonkothesane1
That sounds correct about Putnam. I honestly can't recall if I was there or not. I've probably read about it a few times since his dad is my GP and there are articles about Danny on the walls of the rooms.

I was still in Junior High when Jaime Jones was playing.
Reply to wonkothesane1
bryantwebster
Great stuff, Geoff. I'm curious, though - any mention of Santa Fe Christian's Chad Corona?
Reply to bryantwebster
gyoung858
Thanks, Bryant. I'll double-check when I have a chance, but I'm pretty sure Corona is in the book. I recognized the name from watching him at SDSU.
Reply to gyoung858
gyoung858
Corona is in there: Hit .492 with 9 HR, named Coastal League Player of the Year, second team CIF, U-T all-county, etc.
Reply to gyoung858
tombache
I thought Tony Clark from Valhalla/Calvin Christian had one of the HR records?
Reply to tombache
gyoung858
I'd expected to see Clark's name in the book, Schlom, but it is nowhere to be found.
Reply to gyoung858
leleutd
Ha, this gave me a laugh. I played HS ball in SD during the 2000 season against a bunch of these guys. (While we didn't have any future MLB players, we did have a lefty phenom who played MiLB ball for a number of years. And we did win the CIF championship despite not having any elite talent.)

FWIW, I played with Adrian Gonzalez on a traveling team that summer. Even though he had been taken as the #1 pick in the draft, he was one of the nicer guys I've played ball with.
Reply to leleutd
gyoung858
Travis, that's awesome; thanks for the info. And I found you in the book!
Reply to gyoung858