There is a secret haven of MLB gems hidden in iTunes right now. Under the heading "Baseball's Best," you can find over 150 games ranging from the 1952 World Series to Mark Buehrle's perfect game in 2009. The games feature no-hitters, record-breakers, classic postseason battles and more. Best of all, these games are available in their full, original broadcast (including everything but the commercials) for only $1.99. Today we look at one of these gems: the San Diego at Cincinnati match on September 11, 1985, when Pete Rose finally surpassed Ty Cobb for the title of All-Time Hit King.

It's Wednesday night at Riverfront Stadium. The night before, over 51,000 Reds fans had watched 44-year-old player/manager Pete Rose face off against Padres pitcher LaMarr Hoyt in an attempt to break his tie with Ty Cobb atop the all-time hits leaderboard with his 4,192nd career base hit. Rose was hitless in four at-bats, popping out each time he came to the plate. Tonight, it's 47,000 people cheering their lungs out at the ballpark (bringing the season-long attendance to an "outstanding" 1.6 million). Everyone in Cincinnati is ready to explode in celebration when the moment 23 years in the making finally happens. Luckily for Rose, he has a sympathetic manager penciling in his .267 average and .329 slugging percentage into the number two spot in the lineup (to be fair, Rose's OBP in early September was still a very solid .389). 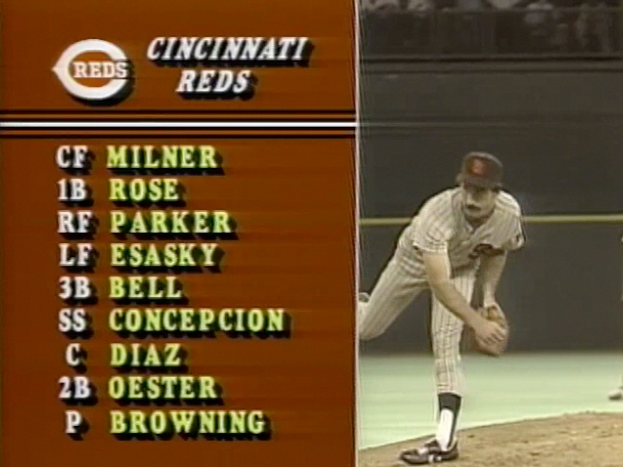 Tom Browning, who is having a nearly "miraculous" rookie season, gets the start for Cincinnati. Lining up behind him, on the very attractive Riverfront turf… 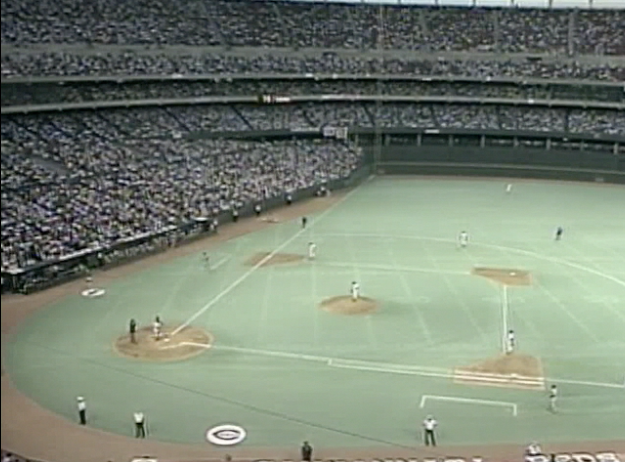 …is first-baseman Rose, looking svelte in his pullover uniform. This is not the last time the cameras will be cutting to Rose throughout the night. 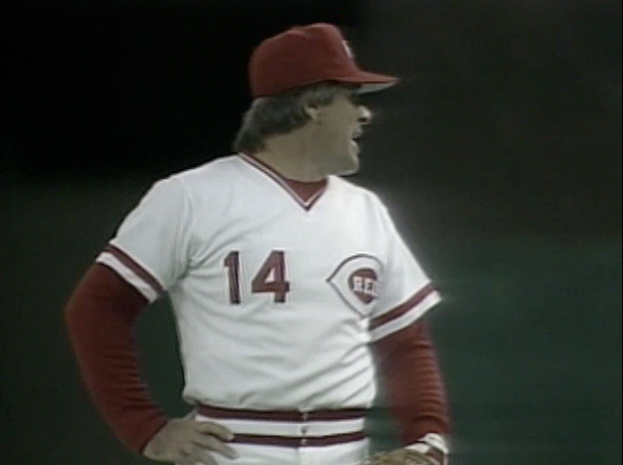 The first inning goes by without drama, with a strikeout and two grounders. The bottom of the inning will see Rose make his first at-bat of the night. As Eddie Milner fouls out to third, Rose looks on. 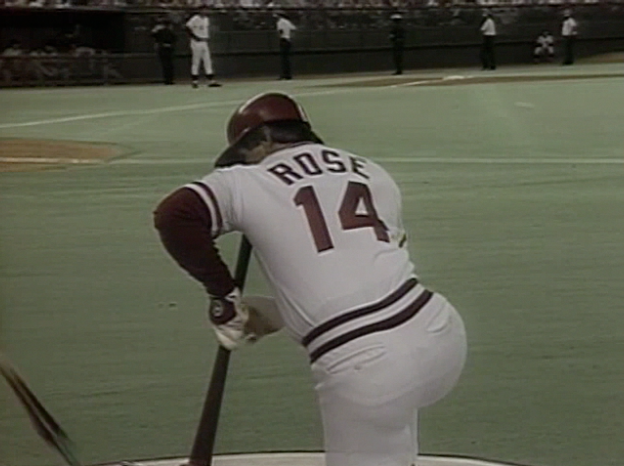 The crowd rises to their feet, yelling and cheering loud for the hometown boy. Facing down Rose from the mound is San Diego's Eric Show, who is described as "a clubhouse flake in many ways. Show, a physics major at the University of California, Riverside, is probably one of the most intelligent players in the majors today." Show leads off with a pitch a bit high and on the corner that Rose takes for ball one. Two pitches later, Rose easily takes a fastball on the inner half of the plate into left-center field. The ball takes an ugly hop off the astroturf, but left fielder Carmelo Martinez is able to snag it and hold the rounding Rose to a single.

But that's enough. With that poke into the outfield, Pete Rose had his 4,192nd hit. The message flashed on the scoreboard and everyone in the stadium screamed. 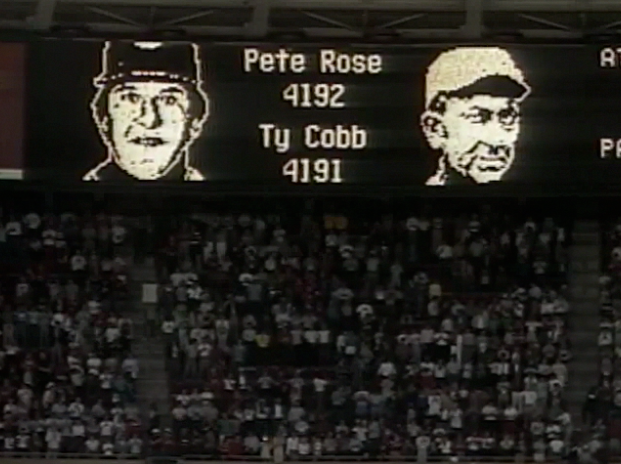 In the owner's box, Marge Schott could not contain herself.

Rose's teammates surrounded him at first base for awkward butt slaps and forgettable handshakes. Someone (it looks like Tony Perez) even had the bright idea to lift the Hit King onto his shoulders.

Having finally composed herself, Schott went down to the field to give Rose a hug and present him with a gift.

Eventually, amidst all the cat calls and back-slapping and other on-field celebrating, Ken Wilson and Joe Morgan, the Cincinnati television team from 1985, join in. Wilson:

"For Pete Rose, this is certainly his crowning achievement. And for baseball, a game that grows from its past and finds warmth in statistics, this is one of the all-time great moments. … From somewhere above tonight Pete's dad has to be looking down with a big smile on Cincinnati Riverfront Stadium and his little son Petey. It has to be a very approving smile from Pete Sr."

And for all the people around that are watching and have your toast ready lets all drink a toast to Pete Rose, the most prolific basehitter in all of baseball history. Pete, this Bud's for you.

And they weren't kidding. Moments later, on the local Cincinnati broadcast, a broadcast being shared nationally, Wilson and Morgan appear on screen like this:

"…this Bud's for Pete Rose and baseball because this, Joe Morgan, is what it's truly all about."

Rose, meanwhile, has almost composed himself at first. But the game isn't ready to re-start and he can't keep it in. First, a hug with Tommy Helms, his first roommate in the majors…

…and then Pete Jr. (Little Petey, as Wilson calls him over the air).

It's tough to capture in a single frame, but there are real tears streaming down Rose's face. Wilson shines a little light on what may be going through Rose's mind: "in his dreams, he imagined a line drive over second base. We'll let a matter of feet go by the boards because he got the hit he wanted."

Seven-and-a-half minutes later, the game is finally ready to resume. As Eric Show begins to bear down on Dave Parker, the two future Hall of Famers* at first base share a moment.

The game resumes, and Wilson does his job of informing the viewers of all the little trivia now set in history: Eric Show "joins Tracy Stallard…and Al Downing…"; umpire Lee Weyer "told Pete when he was with the Phillies" that he "would be the guy calling balls and strikes…the night he passed Cobb"; Shirley Glorioff (?), a local Cincinnati resident, won a Toyota conversion van for guessing the correct game and inning Rose would break the record. This is trivia that will be talked about forever.

In his second plate appearance, Rose walks and scores a run when Garry Templeton can't turn a double play fast enough. Morgan takes Templeton to task for the mistake. 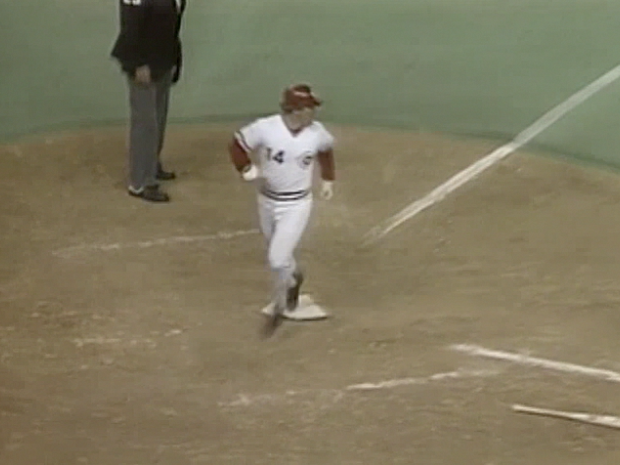 In the bottom of the fifth, with Rose due up, we hear—for roughly the eighth time already—a re-telling of Rose's hit from the first. We're also treated to this quintessentially Rose advertisement read over the air by Ken Wilson:

Who better to teach the art of switch hitting than Pete Rose, one of the all time greats. The all time hit leader. And you can learn Pete's lessons through his new cassette tape [break in video] 6th and Walnut, Cincinnati, 45202.

Rose adds to his memorable night in the seventh, with a hustle triple into the left field corner on a misplay by Carmelo Martinez. For an old man, Rose still runs hard, trotting into third in 12.54 seconds. If he hadn't slowed considerably in the last few steps, that time would easily have been in the 11-second range.

After Rose scores his second run of the game, we learn that Eric Show's wife (and LaMarr Hoyt's for that matter), is not happy with how the game is turning out. 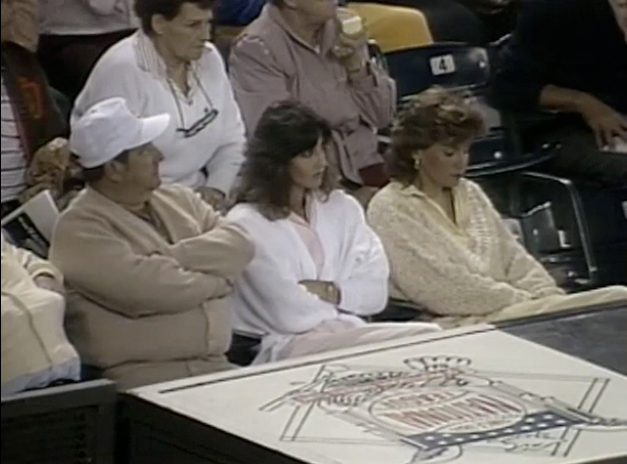 There is still one more highlight to go for Rose on his night. With two outs in the top of the ninth, Steve Garvey fouls off the first pitch of the at-bat to the right side. Rose races for it. Wilson intones over the scene: "And whose glove is it going to go into?!…"

But Rose does have his moment. A few pitches later, Garvey laces a ground ball toward first base.

I honestly don't know if that dive and rushed throw were necessary from Rose, but I can see why he felt that they were. That was a man—a man driven all his life for this one moment—wanting to end the game with a flourish. The fact that he made a perfect, soft throw to the running Ted Power to get the runner is a testament to that drive. It was most certainly a special night for Rose and the Reds family and a game that many expected to be one of Major League Baseball's greatest moments for decades to come. Somehow, however, the sheen has come off the game in the 28 years since it took place.

Other thoughts from the game:

You need to be logged in to comment. Login or Subscribe
tombache
Needs a .gif of Show sitting on the mound during the celebration after the hit.
Reply to tombache
randolph3030
Between Rose, Show and Schott that moment carries a whole lot of epilogue pages.
Reply to randolph3030
lgranillo
Good point. I think I had forgotten what happened to Show. Here's what wikipedia says about his experiences that night: "Show sat on the mound and folded his arms during the delay to honor Rose. Mike Shatzkin in The Ballplayers: Baseball's Ultimate Biographical Reference wrote that Show was "disgruntled (perhaps rightly so) at the lengthy interruption of the contest." Padre Garry Templeton later call Show's actions "bush." Then he got into a dugout shoving match with left fielder Carmelo MartÃ­nez, over a ball that fell for a single and led to the game-winning run. Finally, Show refused to stay to answer the post-game questions, leaving his teammates to criticize him in his absence."

The play that Show would have been upset about is the hit shown in the "Other thoughts" section. Not sure Martinez could have done much about that without risking a double or worse. The Reds broadcast certainly didn't see a shoving match.

I'll try to provide a gif of the one moment the broadcast made of Show sitting on the mound. They certainly didn't think it was a big deal at the time.
Reply to lgranillo
gyoung858
There's also the bit about Ty Cobb's career hit total later being reduced to 4,189, meaning that Rose broke the record two days earlier against Cubs RHP Reggie Patterson.
Reply to gyoung858
gweedoh565
I was too young at the time to remember the record-breaker, but I attended the final night game at Cinergy (nee Riverfront) in 2002, which afterwards featured an insanely awesome fireworks show.

The show culminated with a blazing sparkler that shot from home plate, following the exact trajectory of Rose's record-breaking hit into left field as Marty Brennaman's call played over the PA.