If you were in the market for a new television in 1975, you could do worse than taking the advice of the brand new home run king. 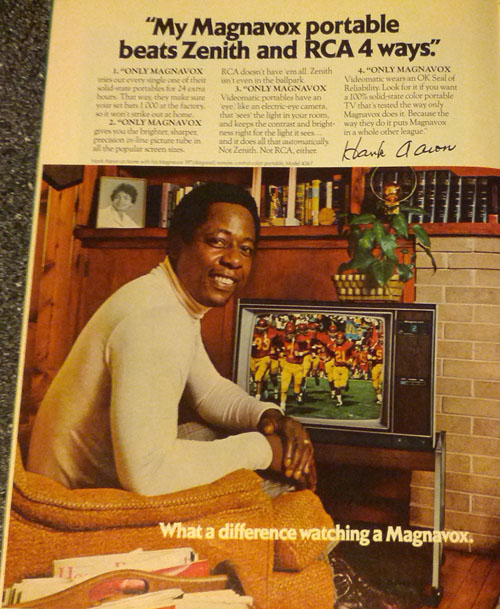 I don't know what my favorite part of this ad for the Magnavox Videomatic portable television (portable?) is, but there are a number of candidates. Let's count them.

I do love the advertisement for all of those reasons, but my favorite is simple: the image of Hank Aaron, one of the greatest ball players to ever play the game and one of the most famous men in America, coming home to a crappy little 20-inch tv on wheels. Even considering small crowds, astroturf, the advent of the DH and free agency, and everything else that has changed since then, nothing has quite driven home the difference in eras between today and Aaron's playing days than that one image. The only thing that could have made it better was if "The Partridge Family" was on the screen instead. What a missed opportunity, Magnavox!

You need to be logged in to comment. Login or Subscribe
mschieve
Is the plant on top of the tv hiding the antenna?
Reply to mschieve
SteveOSama
He's sitting wayyy too close to that TV, would wreck his eyes
Reply to SteveOSama
Nealcp
...love he's watching Mike Garrett there too!...
Reply to Nealcp