Johnny Cueto spent last season atop the NL Central champion Cincinnati Reds rotation, the culmination of a gradual evolution from erratic bat-missing fly-baller to consistent pitch-to-contact groundball-getter. Not every thrower-to-pitcher transition happens so smoothly, as even the best power-pitching prospects often fail to realize their full potential. But the Reds shepherded Cueto through his maturation process with a nice mix of praise and push, and their patience is being thoroughly rewarded.

Cueto broke camp in 2008 as an undersized righty with a big arm, making his mark early on by painting the corners with an “explosive” fastball. With "clean and loose" arm action and “unbelievable command," Cueto successfully attacked hitters with the hard stuff, amid lingering questions about his secondary offerings.

Based on the reporting at the time, the Reds had no doubt that Cueto could bear down and focus, and they were confident in his ability to withstand a full-season workload despite his diminutive stature. Nonetheless, three-pitch pitchers need to show command of more than just their primary offering, and Cueto had yet to demonstrate that he could effectively utilize the other components of his arsenal.

Even as the young pitcher wowed Dusty Baker in his first few appearances, the veteran skipper was already making his concerns clear. Problems with concentration were being mentioned in the same breath as issues with secondary-pitch command, and the honeymoon lasted only about three weeks.

The first change in Cueto's approach came in 2009, when he mixed more sinkers in with his four-seam fastball. The change didn't seem to make much of an impact on his results, and it wasn't until 2011 that the Reds began talking about teaching Cueto to pitch to contact. The next step on his journey up the ladder would be learning to lean less heavily on his gaudy fastball.

It's probably no coincidence that our research found remarks about Cueto being "mature" and "consistent" in 2011: "consistent" is sometimes code for repeating one's delivery, and the Reds and Cueto were also talking about how well he was hiding the ball and maintaining his release point. The season was marred by shoulder injuries, but the results were there in limited action. By 2012, as MLB.com's Mark Sheldon noted, the explosive young thrower had turned into a "focused and intelligent" ace.

"He has such a great feel for pitching," [Devin] Mesoraco said. "He knows how to get hitters out. He's always thinking a pitch ahead, the sequences and everything. Unless you're right there close to him, it's hard to see. You either have it or you don't. It was something he was born with, and he knows he needs to study hitters and he picks up things from them. He's a fun guy to work with because he is so focused and intelligent on the mound."

Those are all hallmarks of a pitcher who has grown more mature over his first few major-league seasons. Other, similar signs include doubling his arsenal of available pitches, increasing his workload (despite injury challenges), and trading strikeouts for grounders.

The 2010 season was a pivotal one for Cueto, as he added a cutter and started to move some of his rate stats (GB%, ERA/FRA) in the right direction, and 2011 was the flashpoint. That year, Cueto brought a curveball into his mix and used a roughly even number of four- and two-seam fastballs. 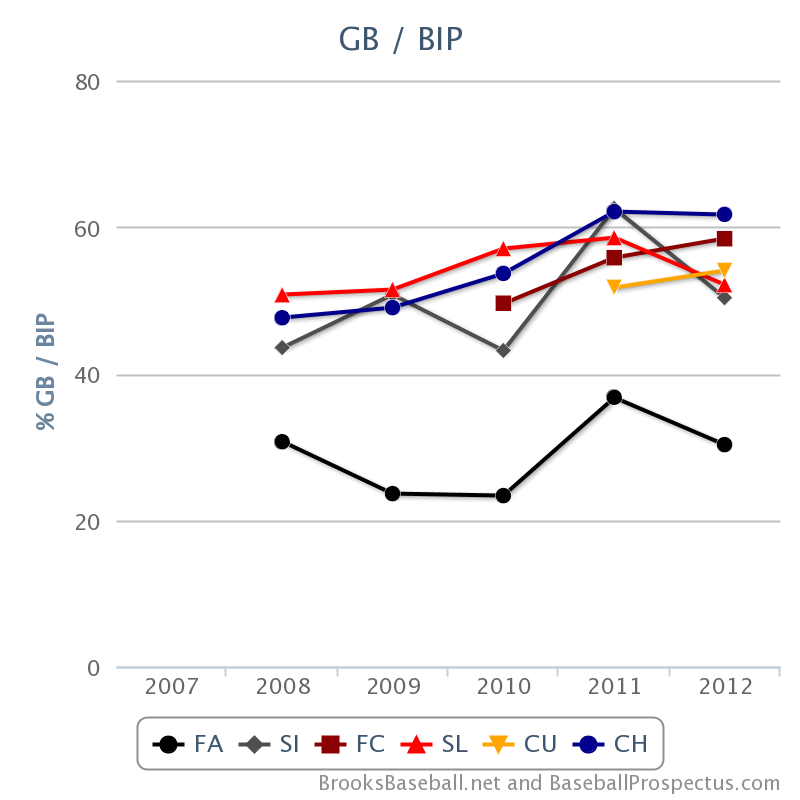 Although Cueto’s cutter usage has declined, the pitch continues to factor into his approach as the number-six option. Since it has been documented by PITCHf/x in each of the last few seasons, and was first used after the system was introduced in 2008, we can be certain that it is not simply a collection of mis-categorized fastballs and sliders.

Meanwhile, because the jump in Cueto’s ground-ball rate coincided with his introduction of a curveball, it's easy to assume a causal link between the two events. However, the change in his batted-ball profile appears to actually be more approach-driven. 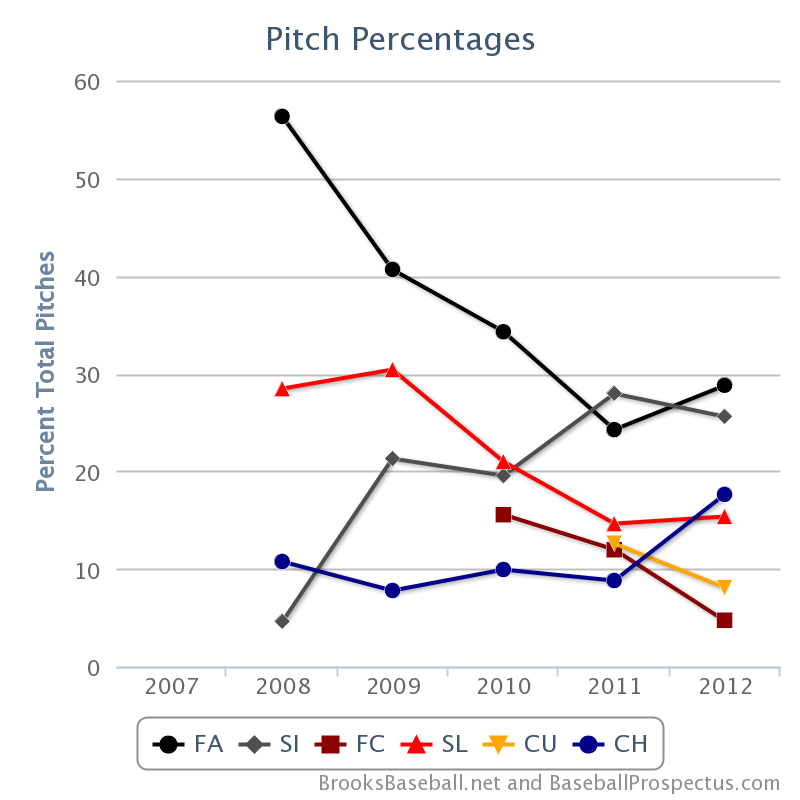 Now that Cueto has fulfilled his potential, he can stick with what he knows works and try to sustain his superb recent performance, which R.J. Anderson and Doug Thorburn examined last July.

Thanks to Andrew Koo, Jonah Birenbaum, and Hudson Belinsky for research assistance.