There is a secret haven of MLB gems hidden in iTunes right now. Under the heading "Baseball's Best", you can find over 150 games ranging from the 1952 World Series to Mark Buehrle's perfect game in 2009. The games feature no-hitters, record-breakers, classic postseason battles and more. Best of all, these games are available in their full, original broadcasts (including everything but the commercials) for only $1.99. Today we look at one of these gems: the Seattle at Boston matchup on April 29, 1986, when Roger Clemens set the major-league record for strikeouts in a game.

Heading into this Tuesday night game in front of 13,414 fans, the Mariners are 7-12 and batting .207 on the season. They have also not had two consecutive hits in 64 innings. The lineup looks like this: 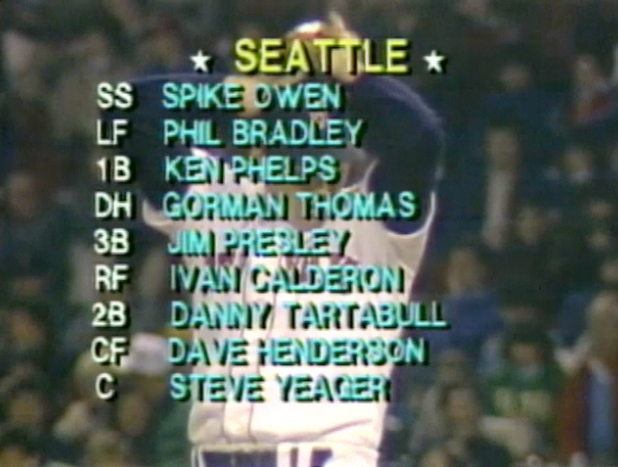 The man behind the plate tonight will be Vic Voltaggio, who is in his 10th year in the big leagues. His compatriots for the night: 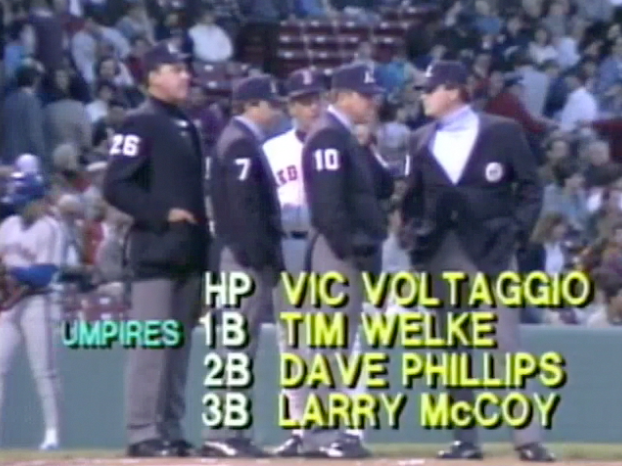 The night begins with the wind blowing in. The 23-year old Clemens looks young and lanky.

The first pitch from Clemens was a strike, naturally. But you would be forgiven if you didn't think the game would turn into something historic. The second pitch looked like this:

Owen actually went down harder on the third pitch, but Clemens salvaged the at-bat to get his first strikeout of the night. I suspect Owen was just happy the pitch wasn't in his ear.

For the second consecutive batter, Clemens struggled a bit to command the strike zone, but Bradley couldn't help himself, chasing a pitch that appeared to be high and off the plate.

The third 3-2 count of the game for Clemens, and the first to start off 3-0. The gimme strike one was no surprise, but Phelps wasn't too happy with the called strike two. Hard to argue with that last pitch, though.

Gorman Thomas led off the inning with a line drive to Jim Rice at the wall. It didn't faze Clemens, who got his first three-pitch strikeout on the next batter. The ball was over the heart of the plate, but somehow Presley seemed to be five feet away from it.

No one had a worse night than Calderon against Clemens. It may have all started in this at-bat, with the strike three pitch barely scraping the plate (and that's being generous). As it was called, though, Clemens was through two full innings with five strikeouts. The eight-pitch inning would be his shortest of the night by far.

Danny Tartabull led off the inning with a six-pitch at-bat before grounding out to second. Henderson followed that at-bat, in which Clemens fell behind 3-0, with this three-pitch strikeout. The out pitch appears to be in the exact same spot as Calderon's strikeout the previous inning.

After a nice at-bat from Steve Yeager to end the third, Spike Owen led off the fourth with Seattle's first hit of the game, a hard grounder past the first baseman. The baserunner really perturbed Clemens, who threw to first six times during the Bradley at-bat. Eventually, Clemens nailed Bradley with a pitch that was nearly identical to the one that earned him his first-inning K, except on the inner half of the plate.

Owens was still bothering Clemens at first, who threw over four more times with Phelps at the plate. The strikeout pitch wasn't quite as overpowering as in his first at-bat, but Phelps looked just as helpless here in the fourth.

Of all 20 strikeouts, this fourth-inning punch-out of Gorman Thomas was the closest to not happening. On the 1-2 pitch, Thomas offered:

But the umpire claimed he held up. So on the next pitch, Thomas popped the ball up for an easy foul out to first baseman Don Baylor…

…whose inexperience at the position shined. The dropped foul ball gave Clemens another shot for the strikeout. Thomas was certain that he held up again, but the call went Clemens' way. It was the 20th pitch of the inning for Clemens, who also tossed it over to first 10 times in total.

Another call on the outside corner. It might just be the angle, but this one looked even more outside than the previous pitches. It would be nice if we had PITCHf/x from the 1986 season.

And yet another one. In two at-bats for Calderon so far, he has seen six pitches and struck out looking twice. Both punch-outs came on pitches on the outside corner, neither of which Calderon agreed with.

Clemens goes back to the inside of the plate to get strikeout no. 12. It is his sixth strikeout in a row. As you might guess, he wasn't done.

Henderson chases a breaking ball off the plate and looks silly doing so. With the called strikes to Calderon and others, Henderson might have felt he had no choice but to chase it.

Thirty-seven-year-old catcher Steve Yeager, who has spent his entire career in the National League, is the last Seattle player to go down on strikes. It was the 89th pitch of the night for Clemens, and his eighth consecutive strikeout. Owen would end the streak with a fly out to center.

It is quite clear by this point that the scouting report on Phil Bradley was to throw it high and hard.

For the third time tonight, Phelps can't catch up to a pitch over the plate from Clemens. It should be noted that, by this point in the night, the game was tied 0-0. While Clemens was mowing down the light-hitting Mariners, Seattle pitcher Mike Moore was doing a great job as well. The first real threat from the Red Sox came in the bottom of the sixth following a double from Bill Buckner, but Moore was able to get Rice and Baylor out to keep the game scoreless. Gorman Thomas changed that in the seventh when he punched a 1-2 pitch from Clemens over the center-field wall for a home run.

Boston gave Clemens some breathing room in their half of the seventh on a three-run home run from Dwight Evans. Clemens was given more relief when Calderon led off the eighth. Strikeout no. 3 to Calderon came on pitch no. 9—though it's apparent that Calderon didn't trust the umpire to give him any room on the outside of the plate. He was swinging at that pitch no matter what. This strikeout tied Clemens with Bill Monbouquette for the Red Sox club record. 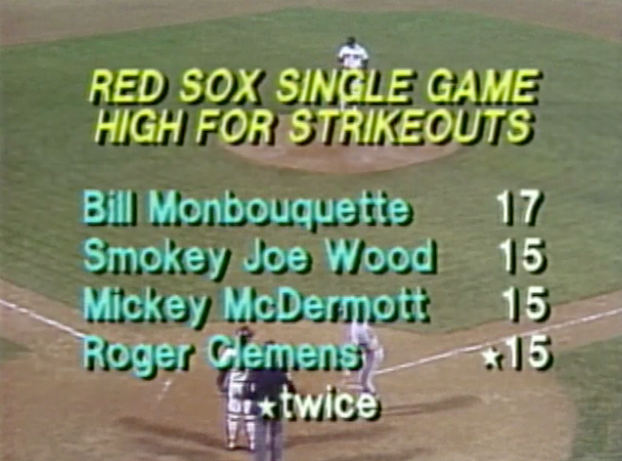 For the first time since the fourth inning, Clemens has to deal with a runner on base after a single from Danny Tartabull. This time, thankfully, he didn't bother with the runner on first, striking out Henderson with a fastball on the hands. He was now the owner of the Boston club record. With four outs left to go, everyone was watching the major-league record of 19 strikeouts. 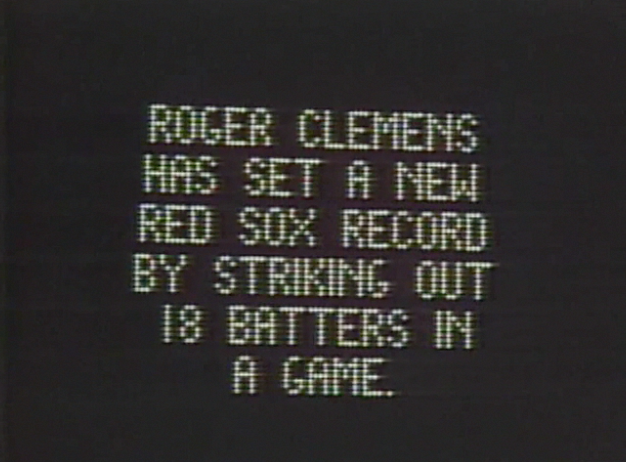 Pinch-hitter Al Cowens ended the eighth with a pop out to center, the 124th pitch of the night. Clemens did not throw his next pitch for another 18-plus minutes, as Boston put on two baserunners and Seattle brought in two relievers in the bottom of the eighth. Meanwhile, Clemens was sitting in the dugout with the weight of a major-league record on his mind. With a 3-1 lead, wouldn't the Boston hitters want to get Clemens back on the field as quick as possible? Not that it mattered. The record-tying K was from leadoff hitter Spike Owen.

And there's the record breaker! Bradley didn't swing the bat once in his ninth-inning at-bat. The pitch appears to be on the inside corner, but it doesn't feel like a bad call. The crowd goes wild, and the Boston television cameras film the celebration.

There's still one last out to get, however, so Clemens can't do much celebrating himself. With a 2-1 count, Ken Phelps grounds out weakly to short, setting off this display of excitement from Clemens. (We do later see Clemens walk over to the stands to hug his wife before heading into the locker room.)

It was a pretty exciting game even independent of the history being made, with Moore pitching very well for six innings for Seattle. My favorite part of the game, however, was in the sixth inning, when Bob Montgomery noted that the "guy who hangs up all the K's" wasn't at Fenway that night. By the start of the eighth inning, someone had arrived to put the K's up. If Montgomery hadn't made that comment, we might never have gotten this image. 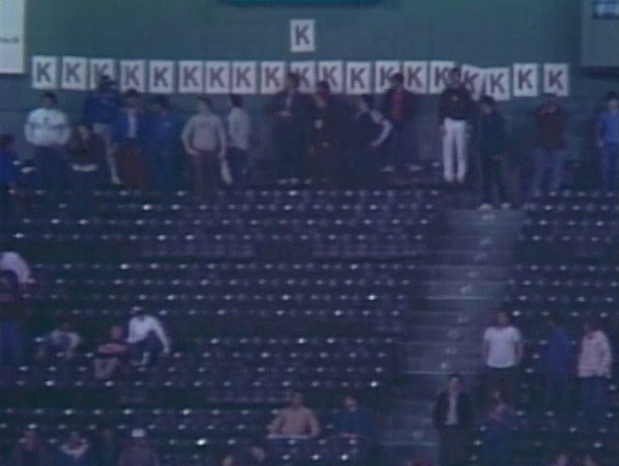 You need to be logged in to comment. Login or Subscribe
navarra
Larry, if you want to download many more historic baseball gems for free, contact me: navarra13@mail.ru
I bet you'll be in awe what we have.
Reply to navarra
jdeich
Well, this sounds legal.
Reply to jdeich
navarra
Yeap, absolutely legal.
Reply to navarra
scylla
Great article, and I love the analysis that accompanies the GIFs. But please, in the description of strikeout #4, the correct spelling is "faze," not "phase."
Reply to scylla
bornyank1
Fixed.
Reply to bornyank1
bwilhoite
Thanks for the tip! Just downloaded the Kerry Wood 20K game. What a masterpiece!
Reply to bwilhoite
greenengineer
I was busy flunking out of college in Boston in the spring of 1986. That night, instead of school work, I spent the evening driving my girlfriend's car around Boston, thinking about my future, while listening to the game. About the 7th inning it occurred to me that I should go over to Fenway and watch the last few innings, as there were certainly seats available. But inertia was too strong and I never made it to the game. I'll always regret that.
Reply to greenengineer