Baseball teams have a long history of charitable endeavors, and all 30 major-league clubs have official charitable organizations involved in various good works. One tried and true fundraising project is the “cookbook for a cause,” in which players’ wives compile their (or their husbands’) favorite recipes in a cookbook, which is then offered for sale to fans. I’m not sure exactly what the appeal is—are baseball wives known to be excellent cooks, or is making Jean Luzinski’s Squash Casserole a way of paying tribute to Greg? Nevertheless, these books have been produced for as long as I can remember.

I’ve leveraged the power of the Internet to find the best and worst examples of the genre.

Without further ado, I bring you: the MLB team cookbook power rankings. 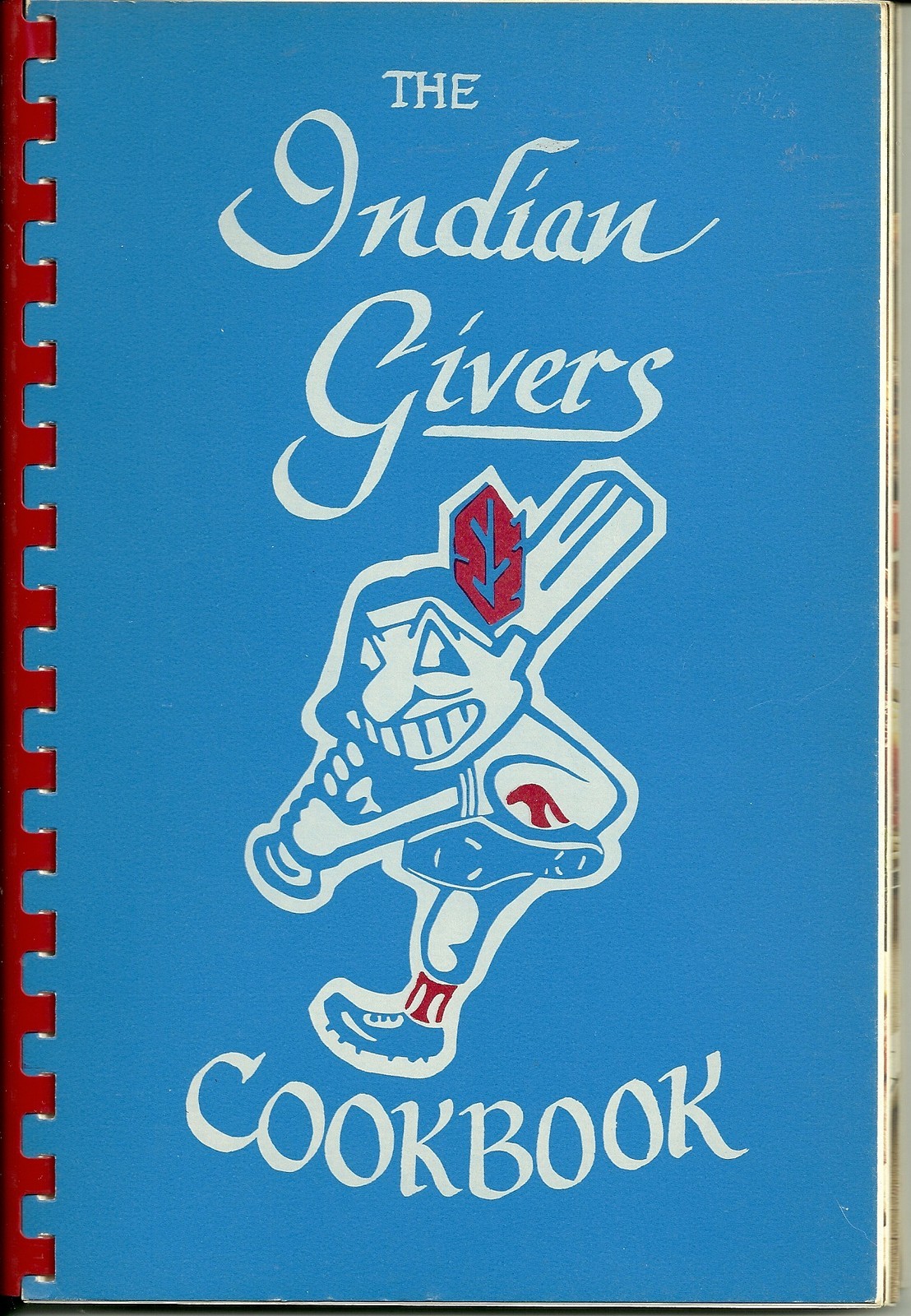 If you were looking for the trifecta of politically incorrect cookbook ephemera, you can stop right here: The Indian Givers Cook Book [sic] series is your Holy Grail. It’s hard to believe that in 1982 both “Indian giver” and “crippled” were de riguer (not to mention the racist caricature that inexplicably persists in 2013).

Beyond those issues, the cover design is strictly sorority-house calligraphy, and the interior looks like it was typeset and mimeographed in my elementary school’s front office.  (To be fair, 1982 appears to be the nadir of the series; other editions look borderline professional.)

The very obvious highlight of “Indian Givers” (besides everything else) is this shot of Bert Blyleven, opposite “Baked Beans” and under “VEGETABLES, Etc.” 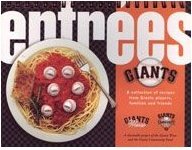 There wasn’t much for Giants fans to get excited about in 2005. Barry Bonds missed most of the season with a knee injury, and Randy Winn was the team’s top player by WARP. This cookbook, featuring Kevin Correia's Chicken Parmesan and Felipe Alou's Mahi Mahi, wasn’t going to make anyone forget about Barry.

Like the on-field product, the cover of this cookbook was also a disaster. It’s typical mid-2000s “just add everything” graphic design. It’s got no fewer than three Giants logos—the opposite of the Red Sox book below—and a floating orange color band that probably should have comprised the right margin. It’s got baseballs as meatballs—because both are kinds of “balls”! The ENTREES/GIANTS title, however, is the worst offender. The book is actually called Giants Entrées, but the design says it’s either Entrées or Entrées Giants. Style over substance, another hallmark of late early (mid) 2000s design.

Also, the book is 43 pages and retailed for $12, which okay I understand this is for charity and stuff but at least create the illusion of value here. 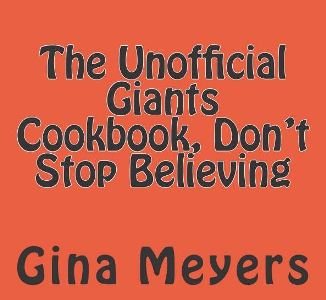 My diligent internet sleuthing also turned up Don’t Stop Believing, the Unofficial Giants Cookbook by Gina Meyers—the only such unofficial book I found. It’s also 50 pages and $10 in paperback, but these are now 2013 dollars, making it a slightly better deal than the official version. (It’s also available as an e-book.)

The description of Don’t Stop Believing claims that “[t]his cookbook will explore the Giant's [sic] victory!” but is there any relationship at all between a team and an unofficial cookbook? Even with an official cookbook, the relationship to the team is tenuous. Can you really just fill a manuscript with recipes like “Team Work Taco Soup” and “Spring Training Sandwich Spread” and sell it on Amazon? I mean apparently you can, but does it work? If Detroit wins the World Series in 2013, will Ms. Meyers change the background color on the cover and sell it as Tigers-branded? This whole business is surreal.

For additional LOLs, go to Amazon and “Click to look inside!” Ms. Meyers book. Or check out her publishing empire, Serendipity Press. Or not. 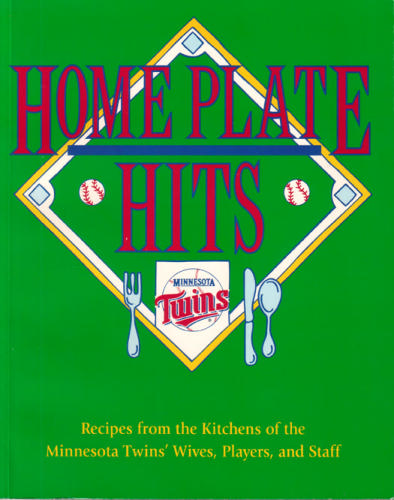 The designer of this book made some bizarre aesthetic choices. When paired with the red and blue of the Twins logo, the bright green background causes  visual vibration and is almost enough to distract you from the myriad other design missteps. A partial list of those would include the choice of title font (a seriffed font similar but not identical to the branded font used in MINNESOTA), the inexplicable yellow band around the diamond (the thickness of which is inconsistent, and seems to be warped just above the “L” in “PLATE”),  the gratuitous use of two baseballs in the design, and the use of home plate as an actual dinner plate, with silverware setting. On the plus side, they got the table-setting conventions correct, even if they got the baseball stuff wrong.

As of this writing, there are five copies of this title available in the Amazon Marketplace for $0.64 each, which suggests that demand for this title is low. 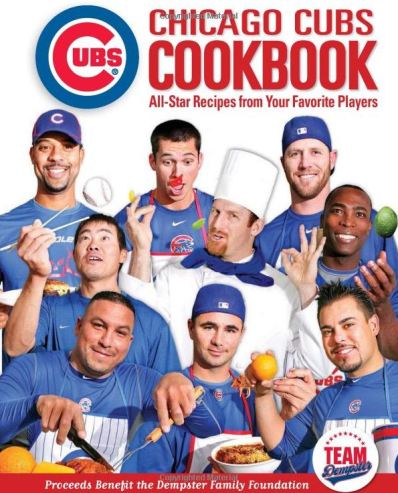 At first glance, this Cubs cookbook looks pretty good. It’s certainly for a good cause: raising money for Ryan Dempster’s foundation for children with DiGeorge Syndrome, with which Dempster’s daughter Riley is afflicted. But after a little scrutiny, this illusion of adequacy begins to break down.

First of all, Kosuke Fukodome appears to be flipping a baseball into the air with a pair of chopsticks, which is physically impossible and also kinda stereotype-y. Ryan Dempster appears to be doing some kind of Luigi Risotto impression, while behind him Tyler Colvin is juggling gummy bears. And maybe it’s just me, but the quickest way to make something unappetizing is to put Ted Lilly and Carlos Zambrano’s faces on it. And hey, Alfonso? Keep your eye on the lime.

A perusal of the table of contents suggests that the recipe content is solid, but the front matter is padded out with extraneous content on various Cubs charities and the history of concessions at Wrigley. Several used copies are available in the $4 to $5 range, belying its 4.9 rating. 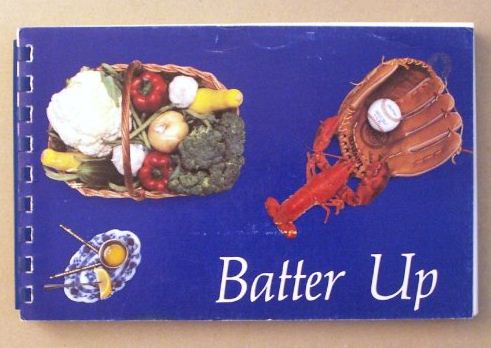 As many of these books do, Batter Up recalls the halcyon pre-Photoshop days, where even simple designs had to be physically pasted up by actual humans. One wonders whether the designer photographed an actual lobster with the baseball glove and, if so, whether s/he expensed said lobster. The ‘80s photo processing makes me feel all warm inside as well.

But there’s a fine line between simple and stupid. The seemingly random array of elements of the page (or “table,” I guess) makes one wonder how much thought was given to the overall design. There’s no mention of the Red Sox team identity on the cover; a massive oversight for a fundraising venture. The font choice is uninspired, and the title should be aligned right to create a stronger line.

Unfortunately the cover is all we have to go on; there are neither reviews nor content on which we can judge. If you have a copy or know where to get one, get in touch!

8. Cooking At Homeplate with the Arizona Diamondbacks (2003), Karen Couch (Editor) 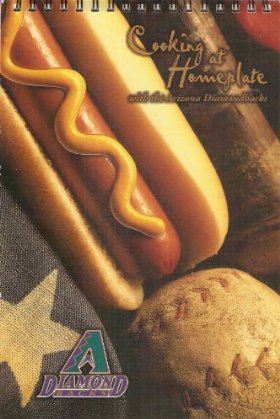 Clearly this cover was designed by a seasoned professional. He or she saw the generic teal-and-purple Diamondbacks logo and selected an appropriately banal stock photo and ornate and almost illegible typeface for the title, Cooking at Homeplate [sic]. And—hang on a minute, the stitching on that ball looks weird. Is it an old-timey ball, or possibly even a softball?

Again we lack any insight into the book’s contents; all that Amazon tells us is that it numbers 54 pages and is the “arizona diamonback [sic] favorite family recipe cookbook.”

If we were judging on quantity rather than quality, the Mariners’ wives would win handily. Alas, we’re not. I am encouraged a little by the improvement I see over the course of the series: Home Plates, the 2000 edition, is the worst example: it has no Mariners branding and while the child’s drawing that adorns the cover is cute, popcorn is not the right dish for a cookbook cover. Later editions have the Mariners seal, and the 2002 issue, The Cookie Book, looks almost professional.

But Starters & Closers may be the oddest of three; I wonder who insisted that since it was called Starters & Closers that it could only include recipes for starters and closers? That seems unnecessarily literal and kind of extreme. And Mariner Moose is holding a pizza and dreaming of pizza and … uhh … other stuff, so it seems like even he wishes that they’d included some main-dish recipes.

Part 2 will appear next week.

You need to be logged in to comment. Login or Subscribe
bishopscreed
Naming your team after a people group is more of a compliment than a slur, right? I have no problem with the Indians, Braves, Chiefs, Vikings, Yankees, or Cowboys. "Indian giver" is over the line, though.
Reply to bishopscreed
KBarth
My first reaction to this was "Oh,'Ian the Vegan' is reviewing cookbooks." So...I get that you won't be testing the recipes, but is it really fair for you to take potshots at the chicken and fish dishes?

Of course, what you're really doing is commenting on the design of the books. Good on you, and it is lighthearted fun.

I know the (most recent?) Phillie cookbook is pretty easy to find in bookstores throughout the metro Philadelphia area. Or is that from the Flyers? Oh dear, they do all blur together, don't they?
Reply to KBarth
Mudeguy
Who let Zambrano have a knife? Not smart. Not smart at all.
Reply to Mudeguy
delorean
I can't believe I overlooked this element. I am now kicking myself.
Reply to delorean
Vicmill1
Every church I ever joined and walked out on published its own cook book to raise extra cash. The only one worth keeping (and for generations) comes from Christ Church Cathedral in New Orleans. Those ladies's servants really knew how to make a jambalaya!
Reply to Vicmill1
SteveOSama
HEY: Proud Owner of the Cubs cookbook, I use it all da time
Reply to SteveOSama
carriemuskat
Thanks for buying the Cubs Cookbook. The players approached me about putting it together, and were very enthusiastic about it. For the record, Colvin is juggling vegetables, and we did put the knife away after Big Z was finished with the photo shoot.
Reply to carriemuskat
delorean
Thanks for clarifying, Carrie! I may have to pick up a copy myself -- Jim Hendry's Cajun selections sound pretty tantalizing.
Reply to delorean
jpaternostro
I know you don't drink Ian, but I'd be interested in a future series on baseball-player-endorsed spirits.
Reply to jpaternostro
delorean
A capital idea!
Reply to delorean
TADontAsk
Who thinks that Alfonso Soriano caught that lime?
Reply to TADontAsk
cdt719
The Blyleven baked beans thing is even funnier in reference to this: http://whitesoxski.com/wp-content/uploads/2012/07/blylevenfarting.jpeg

Reply to cdt719
BHayes
"...which suggests demand for this title is low." made me laugh so hard while reading this in bed that I woke my wife at 130AM. Thanks a bunch Mr.Miller.
Reply to BHayes