At the risk of sounding like a homer, some of the most thought-provoking articles that I have read over the last 10 years have been published right here at Baseball Prospectus. These works of analytical art have influenced and often reinforced personally-held beliefs about the sport, from Nate Silver's statistical shenanigans to Mike Fast's work with batted-ball data and Max Marchi's studies of pitch-framing. The piece that made the most lasting impression was a 2007 article by BP founder Gary Huckabay, in which he made the bold proclamation that “Baseball analysis is dead.”

Huckabay went on to qualify the statement, specifying the diminishing rate of return on the investment of performance stats and citing the marginal utility that had been offered by the latest advances in sabermetrics. He emphasized that the major lessons of statistical analysis had already been learned and postulated that the next major breakthrough would come from elsewhere. Gary's words were prescient, as the revelations that grew from the work of Fast and Marchi were made possible by the recent revolution of ball-tracking technology, including HITf/x and PITCHf/x.

The f/x technology has blazed the trail for the integration of numerical data and on-field events. Although PITCHf/x has opened the door to advancements in baseball analysis by the all-consuming society of seamheads, we are unable to access the privatized information of HITf/x and FIELDf/x. We do still have the ability to combine numbers with physical actions on the field, but first we must train our brains to evaluate the subjective interpretations of our eyes. Experience has taught me that enjoyment of the game is magnified when a personal observation is validated through multiple subjective experiences and then further substantiated by the numbers.

The “analysis is dead” article was Huckabay's first piece in six months, and just the second one that he had published on the site since announcing his farewell in February of 2005. Gary had originally broken his retirement in March of '07 with another powerful piece, this one motivated by the widespread misconception of his branded acronym, TINSTAAPP. To quote the man himself:

When I first wrote that 'There's no such thing as a pitching prospect,' it meant two things, one of which has kind of become lost over time. Yes, it means that pitchers get hurt at approximately the same rate that methheads swap identities and lose teeth. That's what all pitchers do, not just prospects. But it also had another meaning – that guys who are totally blowing people away in the minors, like they're so many hot dog pretenders before Kobayashi, are absolutely not pitching prospects – they're already pitchers, and more time in the minors only means time off the living, pulsating clocks that are their labrums, rotator cuffs, and elbows.

The TINSTAAPP phenomenon was further supported by the evidence that, although hitters tend to follow a relatively predictable performance pattern as they age, pitchers are all over the map when it comes to career trajectory. Individual pitchers progress at much different rates, both physically and mechanically, and the theoretical construct of the injury nexus underscored the confluence of interacting risk factors as a player ventures through these rapid stages of development. My only reservation regarding Huckabay's call to arms is that young players can be physically immature and mechanically inefficient, yet they might thrive in the minors on pure velocity and movement. Tasking an underdeveloped prospect with a big-league workload under the intense lights of the main stage will further accelerate the pulsating clock.

The issue came up on a recent episode of Effectively Wild, in which Ben Lindbergh and Sam Miller discussed the challenges that pitchers face throughout their development. Sam astutely described the life of a pitcher as “war of attrition,” referring to the pervasive tendency for pitchers to lose velocity as they age. Hidden beneath that trend is the fact that harder throwers naturally carry an elevated injury risk, as the high-energy elements that support big velocity also increase the kinetic toll on a pitcher's joints, especially when combined with mechanical inefficiency and a lack of structural integrity. It is thus increasingly important for pitchers to refine their mechanics and to remain physically regimented as they age.

The most successful pitchers of our generation have honed their mechanics as they aged, and the four pitchers who were covered in this winter's “Good Old Days” series transcended a generation of power hitters to put up historic stats. Skill refinement is to be expected from star athletes during their prime stages of development, but the elephant in the room is that many elite pitchers exhibit such similar patterns of improvement.

At the National Pitching Association, we utilized an evaluation strategy in which we started at the top, analyzing the best pitchers in the game by comparing their various mechanical traits to learn the ties that bind the greatest performers. The techniques that have withstood the test of time are those that were exemplified by the vast majority of elite pitchers throughout their careers.

There is one glaring trend that surfaces upon review of the career trajectories of the great pitchers of the Good Old Days, and that is a tendency to greatly improve balance and posture over time, reaping the advantage through a ripple-effect on mechanical repetition with improved pitch command. In the above GIFs, Randy Johnson exhibits the vast improvement of his balance from his early Mariner days to his Cy Young string with the Diamondbacks. The effect is most apparent when freezing the video at the point of maximum leg lift: 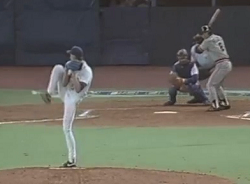 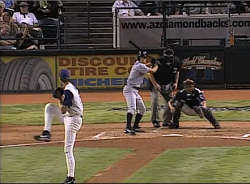 Early in his career, Johnson was the rare pitcher who had shaky balance yet was able to stabilize posture in the late phases of his delivery. A taller leg lift is generally a positive aspect of a pitcher's delivery, but in Randy's case the higher lift of 1990 was linked to poor balance at the top of the delivery, with the Unit leaning back toward third base. His poor balance in the early 1990s was tied to pitch command which sank to levels that would be unacceptable today, resulting in AL-leading walk totals for three straight years from 1990-92. By the time the Big Unit was in his mid-30s, his delivery had ascended to a higher plane that allowed him to cheat the fates of age-related decline, and vast improvements to his dynamic balance kept Johnson's head over his center-of-gravity throughout the delivery.

Randy Johnson is an exception to the general rule that hurlers require a foundation of balance early in the delivery in order to stay efficient into pitch release. The usual result of early balance is strong posture near release point, with minimal spine-tilt, but coordinating this final link in the kinetic chain proves to be a daunting challenge for even the best young pitchers.

Greg Maddux exhibited the more typical pattern, in which minor imbalances in the initial links of the kinetic chain lead to poor posture at release point. This common pattern is often tied to the physical immaturity and lack of functional strength that are typical of developing pitchers. 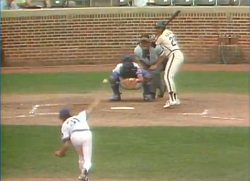 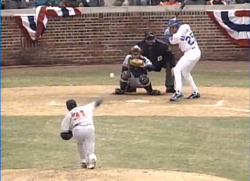 The exaggerated spine-tilt in the Cubs uniform on the left sends the right-hander's head flying to the glove side, and his relative lack of coordination is further indicated by a soft glove that hangs past his knees. The Braves footage on the right highlights the considerable improvements that Maddux made through his prime, with a more balanced head position as well as a stable glove, both of which acted to extend his release distance. It is easy to assume that Maddux was born with perfect mechanics, but young Greg actually had to work on his delivery in order to ascend to “legend” status.

Pedro Martinez is one pitcher who had a very efficient delivery from the beginning of his major-league career, dating back to his Expo years, yet his posture also rose up the grading scale during his Boston tenure. 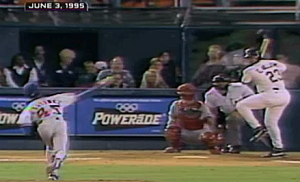 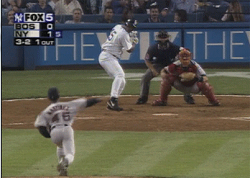 Pedro’s lithe frame and high-energy delivery set the stage for a pitcher to struggle mightily to harness his movements, yet he entered the league with a more balanced motion than most of his veteran contemporaries. He did have some room for improvement, and the wunderkind improved to near-perfect posture by the time he won his second Cy Young Award

The final pitcher on the Good Old gang was also the most controversial, and his denial from the Hall of Shadows set the stage for a trip down memory lane to review the career of a pitcher whom the baseball world had celebrated for more than two decades.

Roger Clemens is perhaps the best example of the phenomenon of ever-improving balance, as he continued to shape his delivery in multiple dimensions over the years. Comparing his breakout season of 1986 with his dominant 1997 tour of Toronto, one can spot his adjustments through a couple of freeze frames. 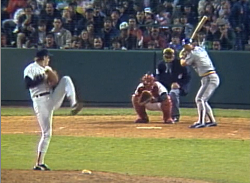 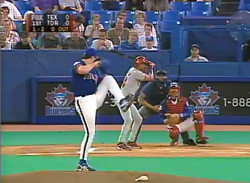 The first indicator occurred at max leg lift, as the younger Clemens invoked some lean to the first-base side with balance that was shifted behind his center-of-gravity, but the mid-30s model had refined his positioning to achieve outstanding balance at the top of his delivery. 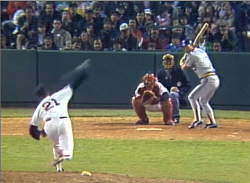 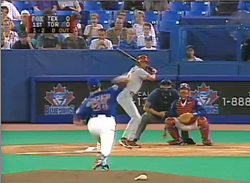 Along with Martinez and Maddux, Clemens exhibited the functional trade-off between arm slot and posture, and each of the legends’ peak performances coincided with the mechanically-efficient stages of his career. A high arm-slot might be an advantage in a vacuum, but the excessive spine-tilt that often accompanies an “over the top” delivery acts as a deterrent to pitch repetition and command. The greatest pitchers of my lifetime have learned this lesson and lengthened their careers.

Anecdotal evidence has limitations with respect to sample size, yet the game's outliers have the ability to teach us the lessons of baseball through their extreme characteristics. In addition to these titans of yesteryear, I recently profiled a couple of modern-day pitchers who have utilized the improved-posture paradigm to sharpen their skills as they mature—Felix Hernandez and Gio Gonzalez—along with countless others who have converted from “throwers” to “pitchers” over the years.

If we remain focused on the big picture, adhering to means and deviations and robust populations, then we might overlook such integral links between form and function, as there exists a vast world of discovery within the confines of individual examples.

You need to be logged in to comment. Login or Subscribe
KerryHofmeister
Quickly becoming my favorite feature of BP. I love the mix of the stills along with the GIFs because it allows me to finally see the specific flaw/strong point in the live action shot.
Reply to KerryHofmeister
bline24
I couldn't agree more. This is fantastic stuff!
Reply to bline24
dcorr82
Look forward to these articles every Friday!
Reply to dcorr82
migueljsteele
This remains excellent. Your articles alone are worth the subscription fee.
Reply to migueljsteele
beeker99
Sorry I'm a little late, but Doug, is the still shot of Pedro on the Red Sox from his one-hitter domination of the Yankees in 1999? Just curious.
Reply to beeker99
tombores99
Yes sir, it surely was! September 10th, 1999. The only hit was a HR by Chili Davis, and the only other baserunner was a plunked Chuck Knoblauch. 17 K, 0 BB, and the big W.
Reply to tombores99