Continuing with The Month In Pitchers Not Throwing Strikes, we're moving on to what will likely be the final installment: the wildest outings of the year. This one is simple enough, looking at the pitchers who threw the most pitches in an outing in order to get (x) strikes. There will be stories told, tangents taken, distractions followed, connections made, charts displayed, and perhaps a GIF or so.

Wildest outing of the year: zero strikes.
There were 15 pitchers this year who entered a game, exited a game, and threw no strikes in between. Three merely issued intentional walks; an additional nine unintentionally walked their lone assignment; and two—Tanner Scheppers and Randy Choate—hit the first batter they faced on the first pitch they threw and were promptly removed. Maybe you think those two, Scheppers and Choate, should be the winners in this category, but that's not how we're doing it, so Jamey Wright wins, instead. Wright threw eight pitches, all balls.

It came in Wright's second appearance of the season, in the Dodgers' third game of the season, and it was particularly brutal because Wright entered the game with the bases loaded. But when you imagine a helplessly wild pitcher, you don't really imagine a chart as orderly as this:

(One pitch is missing, counters.)

Wright was pitching for a double play, missed by small margins, maybe got squeezed a little, and just kept doing it. You could argue he should have changed his approach around the sixth ball or so, but Jamey Wright's best weapon is his sinker, and when it's working, looks a lot like six of those pitches.

To put Wright's outing in historical perspective, no-strike outings as long as his are relatively rare. Since 1990, and excluding intentional balls from the count, there have been 29 eight-pitch outings without a strike, including one where pitcher Armando Almanza actually recorded an out (Rafael Furcal caught stealing, after advancing on Almanza's wild pitch). There was one nine-pitch outing (two walks, one HBP), three 12-pitch outings, and one spectacular 16-pitch outing. That one was by Miguel Asencio, who walked Kenny Lofton, Ray Durham, Frank Thomas, and Magglio Ordonez. And it was, horrifyingly, his major-league debut, and he had to wait 11 days to get another shot. From the game story:

"He was trying to throw the ball 3,000 mph," Royals manager Tony Muser said. "The kid was extremely nervous." Ascencio [sic] missed all over the place — high, low, inside, outside. Only  a couple pitches even came near the plate. But he denied he had butterflies.

But my personal favorite wildest no-strike outing ever was thrown by John Doherty in 1992. Doherty is credited with throwing one pitch, a ball. He is also credited as having thrown a wild pitch, and of hitting a batter—two distinct events that are mutually exclusive. Want to think about that for a while to try to figure it out?

Well, what happened was either a clerical error or a technicality. Doherty did hit Glenallen Hill with his first pitch. Then he did throw a wild pitch with his second, but that wild pitch nearly hit Sandy Alomar, Jr. in the head. Alomar charged, and both he and Doherty were ejected. The pitcher who replaced Doherty, Kurt Knudsen, completed pitching the at-bat and, as these things go, he was credited with that at-bat (and the hit he allowed). So I assume that's why he is also credited with the pitch count of that at-bat, including the first pitch. Anyway, Doherty's wildness was not as drawn out as Asencio's, but it was dense.

Wildest outing of the year: one to four strikes.
Brayan Villarreal wins this one for his 17-pitch, four-strike outing against the Rangers. Villarreal is actually the inspiration for the entire The Month In Pitchers Not Throwing Strikes at BP. You'll recall his involvement in Adventures in Intentional Balls, where he threw three pitches so slow that PITCHf/x literally did not see that they existed, and also this beauty:

Well, as it turns out, when I started looking at pitchouts, he showed up there, too: Villarreal threw the slowest pitchout of the year. There's no real reason to think that the same pitcher should throw the slowest in both categories—a pitchout is supposed to be as hard as a normal pitch, for obvious reasons. And Villarreal throws hard. But Villarreal pitches out soft (66.9 mph):

The runner, of course, wasn't going because the runner is hardly ever going after a pitchout. But Villarreal and his catcher both look over, as if hopeful that the runner didn't by chance catch the fact that Villarreal throws pitchouts like he's blowing bubbles toward home plate.

Other things that Villarreal can't do:

2. Differentiate between a harmless shallow pop-up and a game-ending hit deep over the center fielder's head with the bases loaded and one out in the bottom of the 13th inning.

This was a game-ending hit deep over the center fielder's head with the bases loaded and one out in the bottom of the 13th inning:

3. Throw strikes all the time.
Unlike Wright's wild outing, Villarreal's was legit all over the place, though he also got squeezed on two to five possible strikes. Here's his chart: 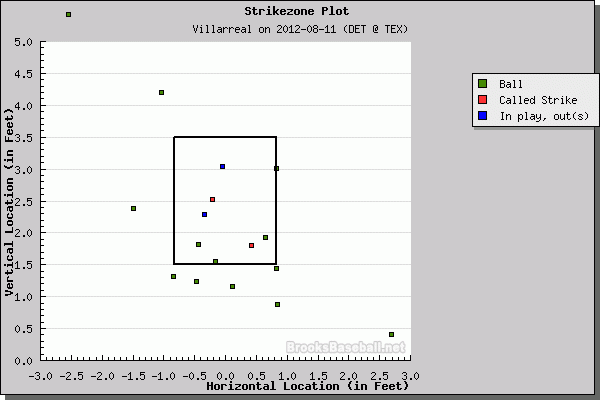 Villarreal ended his outing with eight consecutive balls and would have been on our list of 10-straight-balls pitchers in 2012 except that his stretch was split up over two games.

Other worthy contenders in this category: Rafael Dolis, one strike out of nine; Mitchell Boggs, two strikes out of 11; Dolis, three out of 16.

Wildest outing of the year, five-plus pitches.
Aroldis Chapman cut his walk rate from 20 percent in 2011 to eight percent in 2012, but he did have one outing against the Pirates in which he threw just seven strikes in 22 pitches. Here's his chart: 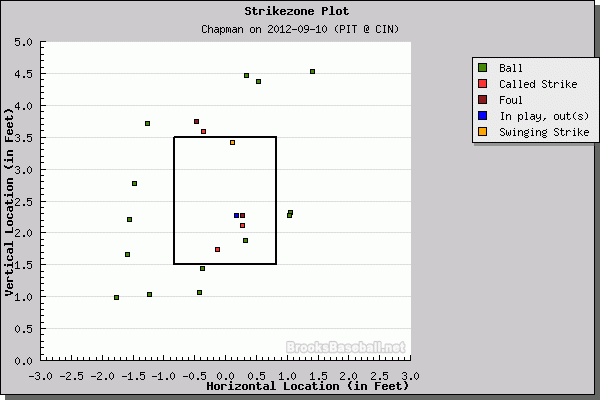 Twenty-one of the 22 pitches were fastballs, but nearly half were classified as changeups because Chapman was dialing his pitches back so much in an effort to find the zone. (Average changeup speed: 93.1 mph. Pitch classifications are tricky, but Chapman does not appear to throw a changeup when he's relieving, though Google is apparently more concerned with other questions than that.)

Chapman with no idea where he's throwing it is pretty much the definition of effectively wild, up to a point. He went past that point in this outing and had to be relieved with the bases loaded in extra innings. As the host of a podcast named Effectively Wild, I started to wonder about the phrase. Specifically, is a pitcher who is effective and wild effectively wild, or does the description require him to be effective specifically because of the wildness? I have always taken it to be the latter, but there doesn't seem to be a grammatical imperative that there be a causative, rather than merely correlative, relationship.

The first time I could find the words linked together to describe a pitcher was in June 1913, 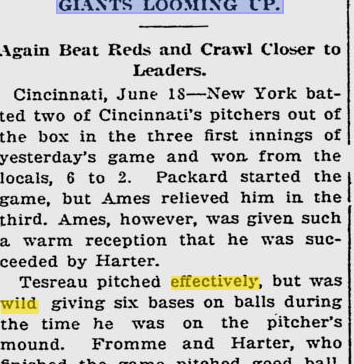 but that's a bit of a stretch. The term itself doesn't show up in news clips until 1979, when Rich Wortham said after a four-hit, five-walk complete game that he never worries too much about walking batters. "I consider myself being effectively wild. Not many people are going to dig in on me," he said, not only putting the term into the public domain but perfectly capturing the logical foundation of it. Lest we consider that a one-off, a monkeys-typing-Hamlet coincidental use of two words in succession, the phrase quickly entered regular use during the 1980s. About a year after Wortham said it, Reggie Jackson used the term from the hitter's perspective:

"I'm not really comfortable against right-handers right now. Right-handers have been making good pitches against me, and a lot of them have been effectively wild in the strike zone."

I also didn't see a reference in any pre-1980 books that Google has archived, so for now we can a) set Rich Wortham in 1979 as the latest the term could have been coined (though certainly earlier references might still be found) and b) declare the relationship between effectiveness and wildness to be causative. Resolved!

And thus ends The Month In Pitchers Not Throwing Strikes.

You need to be logged in to comment. Login or Subscribe
ogden10
Ricky Romero had some particularly terrible outings.
Reply to ogden10
jamin67038
That popup/game-winning hit GIF is priceless.
Reply to jamin67038
benharris
Yes, I love how Villarreal and the runner on second have the exact same reaction.
Reply to benharris
bhalpern
No discussion of effectively wild can be complete without the best ever example: http://www.youtube.com/watch?v=9SH715tr6ek
Reply to bhalpern
BurrRutledge
I knew what this was going to be before I clicked thru. Classic.
Reply to BurrRutledge
DABanales
"Villarreal throws pitchouts like he's blowing bubbles toward home plate." I cried laughing so hard!

Reply to DABanales
adamsobsey
This calls to mind Edwar Ramirez's magnificent 19-pitch appearance on 7/20/07 vs. Tampa Bay. Seventeen of the pitches were balls. One of the two strikes was hit for a grand slam by Dioner Navarro. Ramirez walked the other four batters on 17 pitches.
http://www.baseball-reference.com/boxes/NYA/NYA200707200.shtml
Reply to adamsobsey
bornyank1
I miss Edwar Ramirez. He was fun.
Reply to bornyank1