When camps open in the coming weeks, Rick Porcello and Drew Smyly will each begin a spring-long effort to win a spot in the Tigers rotation. Dave Dombrowski last week conceded Porcello’s experience gives him an advantage before hedging by adding, “I don’t know which way that would end up going,” as well as, “Smyly did such a good job for us last year and you ideally want a left-hander in your rotation.” Even so, don’t be surprised when Porcello opens the year in someone’s rotation—be it in Detroit or otherwise.

Although Porcello celebrated his 24th birthday on December 27th, the 2013 season will be his fifth in the majors. That kind of tenure has the effect of making Porcello feel older and more disappointing than he is. When, in 2007, the New Jersey native—armed with a heavy sinker, power curveball, and Kevin Brown comparisons—slipped in the draft to Detroit at the tail end of the first round due to signability concerns, many pundits proclaimed him the odds-on favorite to become the steal of the draft. His time in the minors did little to rob him of praise. Kevin Goldstein wrote of Porcello’s glass-half-empty projection in 2009, “it’s hard to see him being anything less than a good starting pitcher.”

But four seasons later Porcello has been something less than a good starting pitcher. Since 1950, only Jeremy Bonderman and Bob Friend have thrown as many as 600 innings through their age-23 seaons (as has Porcello) with an ERA higher than Porcello's. Porcello’s salary is increasing at a quicker rate than his production, putting Detroit in an awkward position where it could elect to move on after providing four years of on-the-job training.  A recent flurry of trade rumors signifies that many in the industry—including the Mariners, Diamondbacks, Pirates, Padres, Angels, and Cubs—are still believers in Porcello. For good reason: Porcello seems like a worthwhile project despite his slow progress and mediocre results.

Fastball command is a key for any pitcher. In Porcello’s case, locating either of his fastballs is his best attribute. He can throw his pitches down in the zone, inside to righties, inside to lefties, and even up in the zone. Unfortunately, the rest of Porcello’s repertoire lags behind—in quality and in location. The changeup that scouts viewed as a work in progress a few years ago is now Porcello’s best secondary offering, but that’s not saying a whole lot, since he traded in his knockout curveball for an inconsistent slider.

I talked with Mark Anderson, who has familiarity with Porcello dating back to Porcello's prospect days, about the cause for the change. Anderson said he wasn’t sure why Porcello traded his curve for a slider, but noted that it came during his developmental phase. Still, Anderson believes—as do I—that Porcello would benefit from adding a curve back to his arsenal, preferably of the 12-6 or 11-5 variety.  The curve would give Porcello’s repertoire a vertical aspect that it presently lacks. As is, batters can eliminate the strike zone above their belts. If a pitch does come in high, it’s either Porcello’s four-seamer or a mistake. A curveball would disguise Porcello’s four-seamer and potentially increase its effectiveness.

Anderson shared a tidbit with me about Porcello’s velocity. The right-hander had the good fortune of lighting up the radar guns once or twice in front of scouts; from there, the idea of him sitting in the mid-90s spread like wildfire. Except Porcello rarely threw that hard and instead sat in the low 90s while touching the mid-90s. Porcello’s velocity also came under question in March 2011 when Jeremy Greenhouse wrote about velocity retention and found Jonathan Sanchez guilty of losing the most oomph over the course of a game. Porcello lost the second-most velocity.

Since that was two full seasons ago, I replicated Greenhouse’s methodology (taking the fastest 25 percent at each pitch count) on Porcello’s 2012 season. Porcello is no longer losing velocity as the game wears on, he’s gaining it. Porcello’s ability to retain velocity makes sense. His frame is large and sturdy and his delivery isn’t high effort. The only entry under Injury History on his player card comes from March 2009 when he suffered a lacerated fingernail. Otherwise, Porcello has been a beacon of good health. 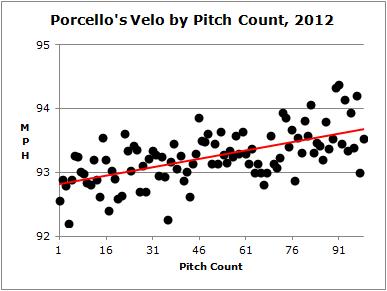 What we have is a young, durable pitcher with good fastball command and control, the ability to retain velocity deep into outings, a developing changeup, and a dire need for another quality secondary offering. Porcello is six months older than Matt Moore, three weeks older than Michael Pineda, and five months younger than Stephen Strasburg. Yet he has more big-league innings than those three do combined. We’re talking about a young veteran with some chicken left on the bone.

Detroit and other teams interested in Porcello will have to weigh his present value versus future value. In a sense, dealing for Porcello is like dealing for a prospect. So much of his value comes from what could be. This isn’t a Justin Upton case, where you can point to 2011 as an example of his upside. This is a case where you have to have some faith in order to see Porcello as more than an average or below-average starter. We’ll see just how much believing the Tigers are ready to do by the regular season.

Special thanks to Mark Anderson for Porcello-related insight.

You need to be logged in to comment. Login or Subscribe
dreyfustard
Is it possible that the Tigers decide to send Porcello down to the minors at the beginning of the year to work on his secondary pitches? Have any other pitchers who had rushed developments done that?
Reply to dreyfustard
NJTomatoes
No player on my long-term-keeper fantasy roster is causing me more anxiety than Porcello this year. I have faith that he'll eventually develop into a quality #3 starter and am willing to let him go with the assumption that I'll be able to buy him back at a reasonable price during our auction. He shows flashes of high quality and I am willing to attribute his struggles to continued development. He's 24 and healthy as a horse.
I'm interested if other posters have POVs on Porcello that might help me better gauge his market value.

Thanks RJ, really appreciate the write-up. How bout a similar review of Chris Tillman?
Reply to NJTomatoes
Deadheadbrewer
NJT, I'm in a similar situation. I purchased Porcello for $8 in an AL-only league two years back, then signed him for four seasons (our league's max, and we have to sign people long-term the day we purchase them, not just in the weeks preceding the following season's auction). I've scorned offers for Mr. Porcello, as I keep thinking about his ranking as a great draft pick in 2009, his lack of minor league seasoning (which means he's had to learn at the MLB level), the fact that he's just now growing into his frame (which is considerable), and the fact that I've seen his velocity climbing.

I don't know that you would have many people fighting you for him on draft day, but I see him as a guy who could really pay off this season. His FIPs are trending down, the K/9 and WAR are trending up, and the K/BB is trending the way you would want it to. His BABIPs have been lousy, and may continue to be slightly poor, given the defense around him, but I believe it's time he has a .279 BABIP for a season, which would make him look very good for once.

We drool over a bunch of pitchers who are the same age who have done nothing more than get out a few teen-agers in some A-ball back pasture, yet isn't it more impressive that Porcello has held his own playing for a good MLB team for four years?

I would hold, but I wouldn't be concerned about losing him to others should you toss him back. Most folks have soured on him, so you should be able to grab him back for very little (somewhere in the $4-10 range, I would guess).
Reply to Deadheadbrewer
justiniodiddly
He could be a very strong pickup for a number of teams, and is might literally be on the worst team possible given his skill set. Guys generally suppress runs with strikeouts, groundouts, and by not walking people. His K numbers are low, but his walks are low too. He did however, have the 5th best GB rate in the AL last year.

Ordinarily, this GB rate is great. Except when your team decides that defense doesn't really matter, so they are going to sign a 300 pounder to play first, and move the 275 pounder to 3rd despite not playing there for years. Peralta isn't exactly the rangiest either. So Porcello gets all these ground balls, and.......ends up with a league leading babip, because the infield has the range of a potted plant. Stick this guy on a team with great infield defense, and most likely his numbers get considerably better.
Reply to justiniodiddly
NJTomatoes
Let's all keep pulling for a trade out of Detroit!
Reply to NJTomatoes
hotstatrat
This is all interesting information that bodes well for Porcello, thank you, but let's keep in mind that the most important stat regarding potential is strikeout rate. Porcello has just now worked his K% up to 13.7 - a K/9 of 5.5. Drew Smyly is at 22.6/8.5. Their velocities are about the same. Durability is underrated, I suppose, as a skill - although, it is difficult to really know if you have it. I can understand Detroit's willingness to part with Porcello.
Reply to hotstatrat