There wasn’t a lot that went well with Heath Bell’s 2012 season, but there was this pitch:

And that pitch was something. It was a strike, obviously. In order for it to be a strike, a lot had to happen at once. Forgive me for quoting something as mockable as Yahoo! Answers, but this guy either knows what he’s talking about or he uses enough big words that I don’t care:

The Pectoralis Major and Anterior Deltoid work in conjuction to both internally rotate and horizontally abduct, moving the ball forward. At the same time, the Triceps Brachii extends the elbow, providing more forward vectors. Also, the Abdominals and Obliques rotate the trunk toward the throw, also increasing forward vectors. The Quadriceps extend the Femorotibular joint (knee) and the Glutes extend the hip, which further increases the forward vectors.

The Posterior Deltoid must undergo massive stretching to slow the motion of the arm (the reason for common Anterior Shoulder Subluxations). The rear leg comes off the ground involuntarily to balance the throw and to bring the pitcher back to a normal position.

All that and the brain has to work, too, and that’s what makes Bell’s strike impressive: the bases were loaded; the game was tied; he had just thrown 13 consecutive balls; and still he managed to throw one right into the strike zone. I can’t even comprehend throwing a strike in that situation, which is, I suppose, why I can’t comprehend it. A brain with that much self-doubt would fall apart. I doubt my ability, therefore I don't have the ability. It takes a brain without self-doubt to do what Bell did, and what every other pitcher in baseball did this year, which is not get the yips.

There were six pitchers this year who threw at least 10 consecutive balls in one outing. None of those pitchers panicked, wet himself, got disoriented and threw a pitch into left field, or in any other way lost the ability to play in the majors. They all started throwing strikes as though nothing had happened, and they'll all make money playing baseball in 2013. But does anything happen to a man between the first ball and the 10th?

Here are the six:

Do the pitchers get wilder as the balls pile up?
Nope. 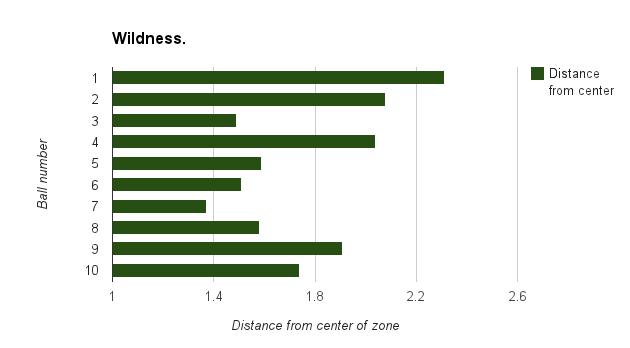 There’s plenty of variability here, so it’s not a straight decline, but the trend—which may or may not be significant—is that the pitchers got more control as their wildness got worse. Obviously, just 10 pitchers, and just 60 pitches, so any narratives I tease out of this are extremely speculative and just for fun. But if you were going to tease a narrative out of this, it would be that the pitchers identified their wildness and attempted to fix it, with some success. It would probably not be that the pitchers suffered any crisis of faith, or that the pressure put on them by increasingly agitated fans, coaches, and teammates made them more nervous and more wild (unless in a small way toward the end).

Do pitchers throw differently as the balls pile up?
Each pitcher is a little different, but generally they don’t ease up on their fastballs at all. This shows each pitcher's fastball velocity as he went deeper into the wild streak: 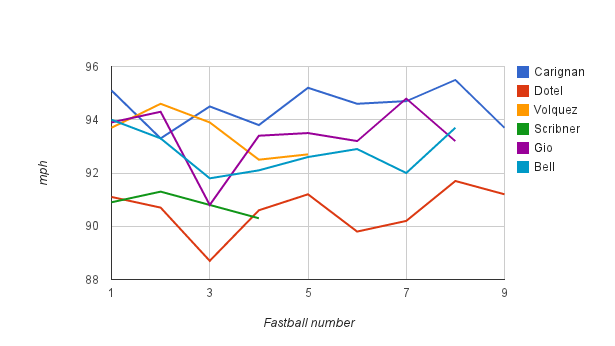 All mixed in some non-fastballs somewhere along the way, which aren't included in the above.

Edinson Volquez shows the most evidence of an altered approach. The first four balls he threw got increasingly wild, and after that he tried a curve and three changeups to find something he could locate, with two more fastballs mixed in. Those two more fastballs, the eighth and ninth balls in the sequence, were among the slowest fastballs he threw that day, though not so slow that they necessarily stand out.

Octavio Dotel, meanwhile, threw nine consecutive cutters before finally attempting a slider on the 10th pitch. It was the only non-cutter he threw all day. He got a strike on his 11th try, when he went back to the cutter.

Do batters expect the pitchers to be rattled?
Or, to rephrase, do they give the pitchers extra space to melt down? A little, but not much. In two cases—against Gio Gonzalez, after 12 consecutive strikes, and Evan Scribner, after 10—the batter swung at a pitch to break up the wild streak. The other four pitchers had to earn their own strike, and in every case that was enough for the batter to treat the pitcher like a fully competent strike-thrower going forward. The three pitches each hurler threw after his final ball:

Most batters took a strike. No batters took two. When Heath Bell threw 13 consecutive balls, for instance, and then pumped one fastball down the middle, Carlos Lee took it. But on the next pitch, Lee went ahead and did this:

Bell may or may not have been showing the first symptoms of Steve Blass Disease, but Lee assumed the man on the major-league mound was a major-league pitcher capable of pitching like a major leaguer. And he bailed him out.

Is there any lingering effect to such a stretch?
Or, alternately, is such a stretch actually suggestive of anything?
Here are the percentage of strikes each pitcher threw in the next 25 pitches, along with the percentage of strikes he threw in the 2012 season. (“Next 25 pitches” excludes the first strike thrown which, by definition, is going to be a strike.)

Again, sample sizes, inconsistency, lack of overall context, blunt measure, so just for fun. But the pitchers who threw at least 10 balls in a row in 2012 actually threw more strikes immediately following that stretch—on average, about 64 percent, compared to, on average, 62 percent season-wide. You could speculate about a reason for this, or you could consider it insignificant, but that’s mostly the point: The pitchers who lost all control for a short time followed those stretches up with stretches that were insignificant. They didn’t lose their minds one bit.

That's not to say that throwing 13 consecutive balls doesn't put some strain on a pitcher. The GIF we started with, for instance, of Heath Bell snapping his streak of balls; compare it to the strike he threw earlier in the inning, when he wasn't on the edge of the yips. Calm Heath Bell on the left; understandably stressed Heath Bell on the right:

From my perspective, he looks a little tweaky in the later one. But that's just me. Here's Doug Thorburn putting it into better words:

Bell has a solid delivery in the first video, but there are a couple of yellow flags in the second GIF. His hip rotation is noticeably slow in the the second video, and there is a weird hitch or delay in his timing of hip rotation when compared to the first video. Bell has a rougher landing in the 2nd GIF, and he appears to lack stability in his lower body—he also does the little crow hop on the second pitch, and it looks as if he is favoring either his hip or his knee.  It's interesting that he hit the same velocity on both pitches, considering the disparate timing patterns, and it looks like he relied more on pure arm strength in the second video.

So (assuming Bell wasn't hurt; he pitched the next night, and for the rest of the year) his wildness did affect him. It did mess him up some. But barely, and not for long. Baseball players do things that amaze me, is all.

Some leftovers from this.

There were others who threw 10 or more consecutive balls across multiple outings: Jamey Wright and Brayan Villarreal, whose wildness I’m likely to write about in a separate piece this week; Kerry Wood, whose 11 consecutive balls were broken up by an inning-ending pickoff on a 3-0 count; and Wei-Yin Chen. Chen actually has very good control, and he didn’t walk more than two batters in a game during the final two months of the season. But in April he temporarily lost control, walked two batters on four pitches each, got pulled, and began his next start with a four-pitch walk and first-pitch ball. If you just glance at his game logs, you'd never know there was such an out-of-character meltdown tucked into his season. The Orioles won both games, Chen allowed a total of two runs in the two games, and he walked a total of just five in the two games. 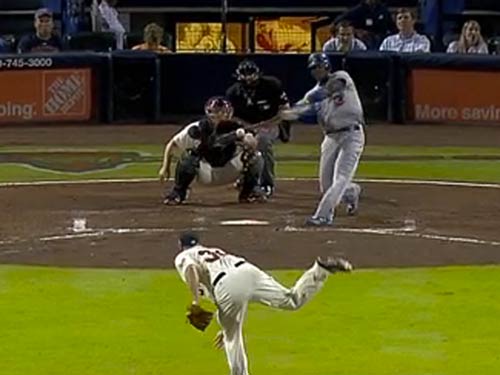 shows why batters don't give pitchers too much space to work out their problems. Ramirez homered.

Thanks to Rob McQuown for research assistance and Doug Thorburn for analysis.

You need to be logged in to comment. Login or Subscribe
hotstatrat
Just a technical note: you said: "On average, the first ball thrown by our six pitchers missed the strike zone by 2.31 feet . . .". Yet the diagram indicates that first ball was 2.31 feet away from the center. Home plate is 17 inches, so based on the charts, the first balls were 1.6 feet out of the strike zone. That still stretches my credulity. I'd have an easier time believing those numbers if they were average "inches out of the strike zone".
Reply to hotstatrat
lyricalkiller
It should have said "center of the strike zone," which is to say a combination of up down left right away from dead center. My apologies for the typo.
Reply to lyricalkiller
hotstatrat
This goes to show what professionals these men are who reach the Major League level.
Reply to hotstatrat
SixToolPlayer
Sorry, I'm all worked up from seeing Gio Gonzalez here. More than once during the season (including in the NLDS), he'd get into these funks where he just COULD NOT throw a strike. The pitching coach and catcher would come out and yell in his face to just put one in there, and he couldn't do it.

So frustrating.
Reply to SixToolPlayer
SteveOSama
surprised Carlos Marmol didn't show up here, yeah
Reply to SteveOSama
lyricalkiller
Came very close!
Reply to lyricalkiller
brucegilsen
For the velocity and closeness to the plate, I wonder if there was a change on 3-0 pitches, where (assuming the hitter was considered likely to take) the pitcher might have tried to ease up and throw an easier pitch in the strike zone.

Though there are certain pitchers - the ones who seem to walk opposing pitchers more frequently than average , like Volquez - who seem to struggle with doing this.
Reply to brucegilsen