Alex Rodriguez
Rodriguez finally underwent surgery on his left hip, and even though it went as expected, he’ll probably be out until mid-July. During the arthroscopic surgery, three small incisions were made for the instruments before Dr. Bryan Kelley addressed a cam impingement, a torn labrum, a cyst, and cartilage damage. It's not the worst possible scenario, but it's a lot of things to fix in one procedure.

Last year, Ben and I authored a mini-series focusing on common baseball injuries. One of the best-received articles covered hip injuries, focusing on impingement with labral tears—a condition that is becoming increasingly more prevalent in all athletes. You can read that article here. A quick recap: The labrum is a ring of cartilage that deepens the socket for the femoral head to stay in. Cam lesions are bumps off the femoral head that develop over time. The x-ray below illustrates this more clearly: 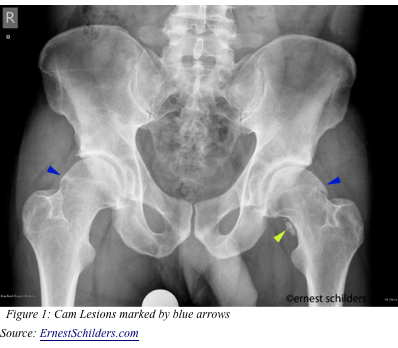 When the leg is brought up and twisted inward, the femoral head will contact the labrum above it and the rim of the hip socket. At some point during extreme motion, bones will make contact, but in cases of cam impingement, it occurs earlier in the motion. Because of this earlier contact, Rodriguez was more prone to tearing his labrum and cartilage damage.

This was not something that developed overnight, or even over the course of the 2012 season. It developed gradually and likely began back when A-Rod was a teenager. Why has he been able to produce at a high level? The body will do almost anything to reach a goal. In this case, Rodriguez’s body allowed the joint to get into a position to create enough force to rapidly rotate his hip at least 50 times per day during the season.

Over time, the labrum roughens and a tear develops. Before you know it, the articular cartilage softens and wears down, which is the area of greatest concern. For all the advances in medicine, there is still not an optimal method of repairing articular cartilage after injury or osteoarthritis of this nature. Rodriguez was somewhat lucky because he had a significant tear in his labrum but minimal articular cartilage damage.

His recovery is going to take most, if not all, of the first half of the season. In 2009, he didn't have a cam lesion burred down, so he was able to return eight weeks after his surgery. In order to determine how much to burr down, the surgeon moves the leg around during surgery, looking to see how severe the impingement is. The extra bone is burred down, temporarily weakening the area until it fully remodels, which takes a while. If the bone was not such an important weight-bearing bone, it might not be an issue, but a fracture in the femoral neck where the bone is burred down could have disastrous outcomes.

Fracturing the femoral neck has a higher incidence of avascular necrosis (AVN), where the bone in the femoral head starts to die because of the disrupted blood supply. As it progresses, the bone collapses and the integrity of the hip joint is lost. This next image provides a good illustration of the blood supply and what occurs when AVN progresses. 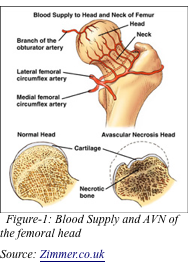 To see how much of an impact AVN can have, one just has to look at Bo Jackson after his hip injury. Even though Jackson's initial injury was different, the resulting AVN is the same as a femoral neck fracture.

How much the injury affected Rodriguez's playoff performance is hard to determine. With any painful area or restricted motion, the body will compensate. Dr. Kelly believes that the condition of Rodriguez’s hip did affect his performance and that PEDs did not play a role in the cam lesion development and torn labrum. How this surgery affects A-Rod’s production moving forward remains to be seen, but it seems unlikely that he will return to his previous performance levels.

Mike Napoli
Details are starting to emerge about why Napoli’s deal with the Red Sox took so long to finalize. An MRI taken during Napoli’s physical showed a potentially devastating condition, avascular necrosis (AVN) of both hips. The blood supply to the femoral head is perilous, and the balance can be thrown off easier than other parts of the body. The blood supply around the femoral neck doesn’t have a large area to pass through, and when disrupted because of injury or disease, healthy blood vessels can’t make up for the damaged ones. The area of bone supplied by the damaged vessels starts to die and slowly decays, potentially leading to a collapse shown (see the second figure in the A-Rod section). It is not isolated to the femoral head, as other bones prone to AVN include the scaphoid bone near the very base of the thumb at the wrist, the talus bone in the ankle, and the head of the second metatarsal bone near the base of the second toe.

Napoli did have an MRI prior to last season with the Rangers that reportedly did not show any evidence of AVN. Given that it is asymptomatic, there is a very good chance that the AVN has not progressed quickly enough to cause significant collapse of the femoral head. Small lesions that typically involve less than 15 percent of the femoral head are less likely to progress to collapse, especially if they are asymptomatic. In addition, considering the fact that it involves both hips, the cause is less likely to be caused by injury than because of metabolic bone factors or, even less likely, the chronic use of medications in the anti-inflammatory drug class. The good news for Napoli is that it appears the lesions are small and there is a good chance of them remaining asymptomatic for the next five-plus years.

Dr. Joseph Lane, a metabolic bone disease specialist at the Hospital for Special Surgery in New York, is treating Napoli with medications and will likely conduct serial exams to monitor any progression of the AVN. Moving Napoli out from behind the plate is expected to help keep the AVN from progressing, but nothing is guaranteed. Going forward, the AVN is not expected to affect Napoli’s performance this year, but it is much harder to predict what might happen beyond 2013. He may have to face a series of one-year deals.

Corey Hart
Hart was going through his offseason workouts when he developed swelling in his right knee. A subsequent MRI showed a cartilage defect, and he was scheduled to undergo surgery on Monday. However, Hart decided to seek a second opinion, since surgery would knock Hart out for several months. The defect probably wasn’t present when Hart had surgery last season because it would have been visualized during surgery. His accelerated progression from that procedure could have played a role in that his biomechanics changed, but there were no signs of any trouble until midseason, when he missed a day with knee soreness. Even then, he finished out the season without missing additional time because of his knee.

Hart will undergo a microfracture-type procedure to get blood into the cartilage defect, and another small meniscal tear will be repaired. He won’t be able to participate in weight-bearing for about six weeks He’ll probably return in late April.

Jesse Litsch
Litsch doesn't have an estimated return date from his shoulder troubles that plagued him throughout 2012. What started with a PRP injection ended with Litsch's career in serious doubt, waiting for a cadaver bone and cartilage graft to repair damage in a landmark surgery on a baseball player. The infection attacked the cartilage in the shoulder joint, leading to a potentially life-threatening condition that had to be treated with emergency surgery.

The cartilage destroyed by the infection was damaged beyond repair and required removal, leaving the shoulder unable to go through everyday activities without pain. Litsch’s upcoming surgery is not completely unprecedented, it's just normally used for older patients who need improvements in their daily functioning. No active professional pitcher has had this procedure, so there will be numerous questions about Litsch’s recovery. The first hurdle will be getting the bone grafting part to heal, which normally takes several months. Litsch is not expected to pitch in 2013.

Flesh Wounds
Andrew Cashner suffered a lacerated tendon in his right thumb in a hunting accident that required surgery on December 5. It will be about three months from the time of surgery before Cashner can start a throwing program. He is expected to start the season on the DL. … Nick Blackburn is expected to miss the start of the season after having right wrist surgery last week. His wrist will be immobilized for six weeks before physical therapy can begin. … Joel Carreno underwent surgery in early December due to facial fractures after being hit by a line drive. He is expected to be ready for spring training.