A few weeks ago, prior to the holidays, I called Coco Crisp the league’s best basestealer. Being the best anything is a temporary position, so when you label someone the best you get people thinking about who will be the future best. In this case, that probably means Billy Hamilton. But the lack of video makes it next to impossible to review Hamilton in a thorough manner. Besides, writing "He’s so fast," over and over is a boring read. Instead of Hamilton, I opted to review two other players with a shot at usurping Crisp: Mike Trout and Desmond Jennings.

After Trout’s freshman season, it’s hard to call him the next best anything with a straight face. To be so young and accomplish so much is setting one’s self up for Tom Buchanan comparisons*, but somehow I think Trout will do okay with it. He might be, depending on Hamilton’s status for the upcoming year, the odds-on favorite to take Crisp’s spot in 2013. Trout showed off impressive chops by swiping 49 bases on 54 tries last season, running his big-league career total to 53 of 58 (a 91 percent success rate).

*As Fitzgerald wrote in Gatsby, “[One] of those men who reach such an acute limited excellence at twenty-one that everything afterward savors of anticlimax.”

Anyone who read the Crisp piece probably remembers the screenshot of Crisp steaming toward third base while Tim Lincecum is gazing at the plate. Crisp is three-fourths of the way to third by the time Lincecum’s pitch crosses the plate. None of Trout’s steals provided such dramatic imagery. Rather, this is what a typical Trout steal looks like: 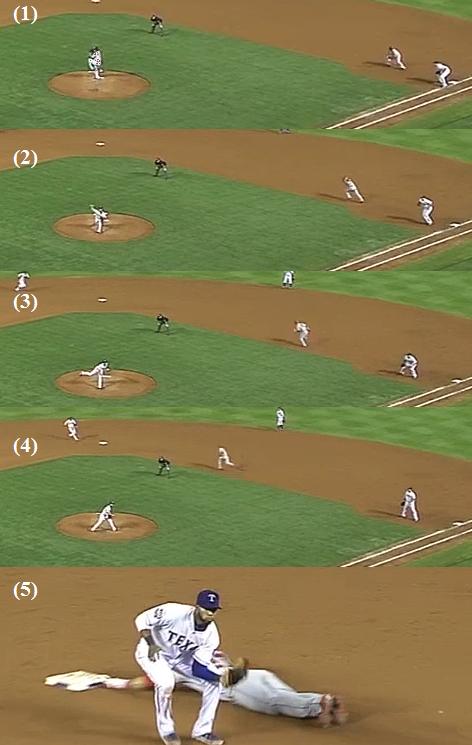 On 5/11, fifth inning, versus Yu Darvish

(2) As Darvish begins the final part of his delivery

(3) As the pitch crosses the plate

(4) As the catcher releases his throw

(5) The ball arrives as Trout touches the base, no chance

Trout reaches the three-fourths mark as the catcher releases the ball; not as impressive as Crisp’s theft, but look at the difference in Trout’s location in the final two frames, and then at where Elvis Andrus fields the throw. Trout’s explosiveness and speed (he is an 80 runner, after all) put a burden on the catcher to make a perfect throw. Unsurprisingly, Trout stole 11 of his 49 bases without a throw. Mike Scioscia loved complicating matters for opposing catchers by having Trout take off with a runner on third, as was the case on five of those no-throws.

Whereas Crisp’s steals were heavy on wit, Trout’s are mostly the result of his athleticism. Of those 47 stolen bases with identifiable triggers, 46 were move-based—that is, Trout waited for the pitcher to make his move toward home. That one remaining was a look-based steal. It came on a 1-2 count against Pat Neshek during an at-bat where Neshek had thrown over a few times, almost picking off Trout on one occasion. Trout took advantage of seeing Neshek throw over, and of Neshek’s rotation-heavy delivery, and took off as soon as Neshek— with his bright yellow hat bill serving as a vision cone—turned his head toward the plate. Crisp would be proud.

Although Jennings led the league with a 94 percent success rate last season, his career success rate falls short of Trout’s 91 percent. Still, the 26-year-old managed to swipe 31 bases in 33 tries, including four swipes of third and a successful delayed double steal of home, despite missing time with a strained knee. Jennings does share similarities with Trout. Namely, both rely on reading the pitcher’s motion, getting great jumps, and using their blazing speed to close the deal, as you can see in these frames of a typical Jennings steal: 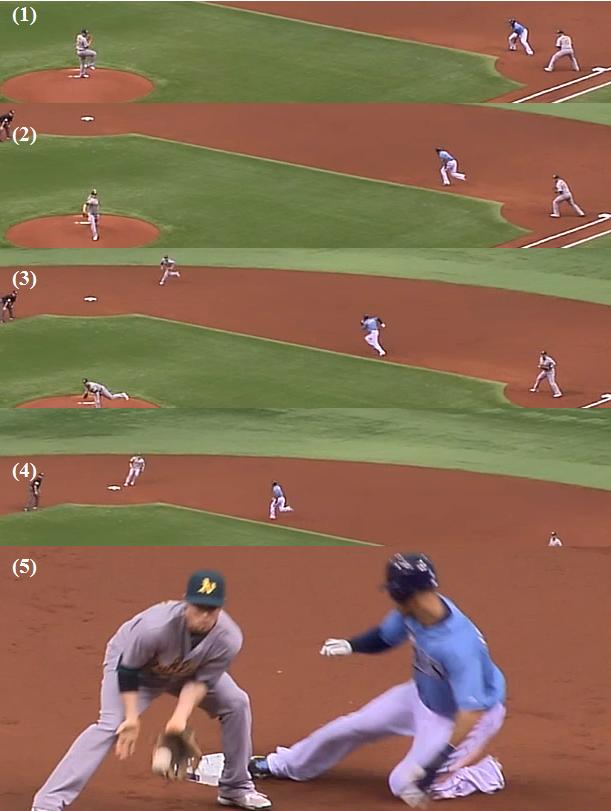 On 5/6, first inning, versus Tommy Milone

(2) As Milone begins the final part of his delivery;

(3) As the pitch crosses the plate;

(4) As the catcher releases his throw;

(5) The ball arrives with Jennings, but in poor location

Twenty-two of the 24 identifiable triggers were move-based; the other two were delayed, one coming on a ball in the dirt, and one on a delayed double steal. If we measure a basestealer’s aptitude by the percentage of uncontested steals, then Jennings tops Trout with a 26 percent no-throw rate. Only two of those eight non-acts were because of other baserunners, which might say more about the bottom of the Rays lineup than Joe Maddon’s tendencies.

The one trick Jennings did deploy came on a July 1 steal against Drew Smyly. Jennings had his hands on his knees as the left-handed Smyly began his delivery, yet he still took off. In essence, Jennings played possum. (Brian Anderson, the Rays analyst, said Jennings sandbagged Smyly.) Not quite a look-based trigger, but still notable and amusing.

Our sample of basestealers is too small to make definitive claims, but Crisp did go on looks more than Trout and Jennings combined and then quadrupled. It makes sense, as the youngsters still have their peak athleticism, while Crisp has to make up for lost steps. Think of it like breaking into a bank vault: Crisp picks the lock. Trout and Jennings can just smash their way in.

You need to be logged in to comment. Login or Subscribe
kings19
good article, bad analogy
Reply to kings19
tannerg
How really really fast guys steal bases is kind of a yawner.

Goldschmidt stole a base off Mark Buehrle last year. That doesn't seem possible.
Reply to tannerg
matthewverygood
He's definitely not in the elite category of Mike Trout or Coco Crisp, but Everth Cabrera of the Padres did awesome this year, stealing 44 of 48 for a 92% success rate. This was only in 398 ABs and led the NL.
Reply to matthewverygood