It is my job to write an introduction right now. This means thinking about some appealing way to present the topic, using language in a way that effectively communicates to you what is ahead, perhaps something funny or novel, a metaphor, an anecdote. Words that are useful, basically. And to do it efficiently, so I don't lose you before the GIFs start. That's what an introduction is, and that's what my job is right now.

But what if my job was to write an introduction that does none of those things? If, in fact, the more of those things that I did, the worse the introduction was? Then my job would be so much easier! It would have taken me about 1/12th as long as my actual introduction-writing task took, because I would just copy some excerpt from whatever page I had open in a different tab, paste it here, like

. In
“COMPOSITE SKETCH OF MY
ILLNESS,” the narrative voice
says, “I’m separate from the
author. Like a moth, I have fur
on my ba

And I would be done! Yesssssss.

Kelvin Herrera threw the hardest average fastball in baseball this year, at 98.5 mph. There are a billion statistics—I don't know if this is a statistic as much as it's a measure, but the first sentence of Wikipedia's entry for "statistic" (as opposed to "statistics") is "a single measure of some attribute of a sample" so I guess they're the same thing—and some of them are great to lead the league in, such as OPSBI, and some are not as great to lead the league in, such as wild pitches, and then there are the ones that are value-neutral but descriptive, like percentage of split-fingered fastballs thrown. Average fastball velocity has a bit of all three. Knowing that Herrera threw the hardest average fastball this year, we know he:

In fact, as a single statistic on its own, it's terribly unhelpful for predicting future success. Here are the past eight pitchers to lead baseball in average fastball velocity, and their value the following season:

Which is all just to point out that Kelvin Herrera throws really, really hard. And so a 92.1 mph intentional ball is acceptable coming from him. Henderson Alvarez, on the other hand, is trying too hard: 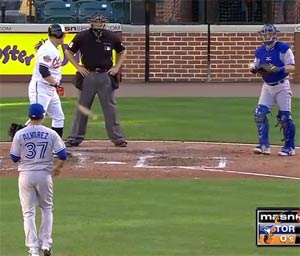 To which Alvarez replied that he has gum. 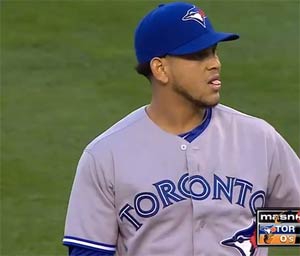 Communication, folks.
Slowest Intentional Ball.
Here we have an inconclusive answer to the question. The answer, as we have it, is Brayan Villarreal, who threw this pitch 41 mph lololol.

The thing is, his next three pitches looked just as slow, but none of them show up in PITCHf/x. Not at all: not in queries, not on online PITCHf/x tools, not on MLB's Gameday description of events. In some instances, the entire at-bat has been eradicated from history. Colin Wyers reports that "there is a minimum speed at which the system is going to fail to record a trajectory at all," which is evidence that the next three pitches might have been slower than this one. Here's a screengrab of one of the three, which shows that either Brayan Villarreal is really, really bad at this, or that Alex Avila was daydreaming that he just caught the final strike of the World Series: 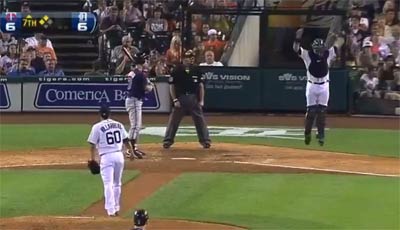 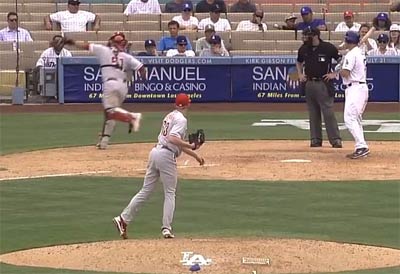 What's beautiful about it is that the batter is A.J. Ellis.
Catcher: We're going to intentionally walk this guy.
Pitcher: Cool. This is my first day on the job, so I apologize if this is a dumb question, but
Pitcher: What does that mean?
Catcher: Just throw a pitch that the batter would never, ever in a million years swing at.
Pitcher: So, for this guy, A.J. Ellis, that would be…?
Catcher: Pretty much right down the middle would be fine.
Diekman took no chances. Diekman's got a funny pitching motion, and pitching in general is funny, but watching him pitch frame-by-frame is galling. This is what Jake Diekman looks like in reverse.

Furbush can't competently throw an intentional ball, but at least he knows the rule that if a fan asks for a ball you must throw it to him on the next live pitch. 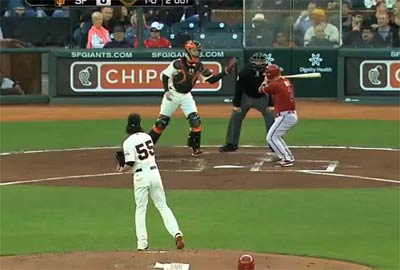 Delightfully, Aaron Hill seems to be so surprised at the trajectory of the pitch that he actually ducks out of the way a little bit. Maybe. He's either doing that or he's ducking down to make sure the pitch isn't called a strike on him. Either way!
The closest pitch to the center of the strike zone is this one, by Jose Mijares to Hanley Ramirez: 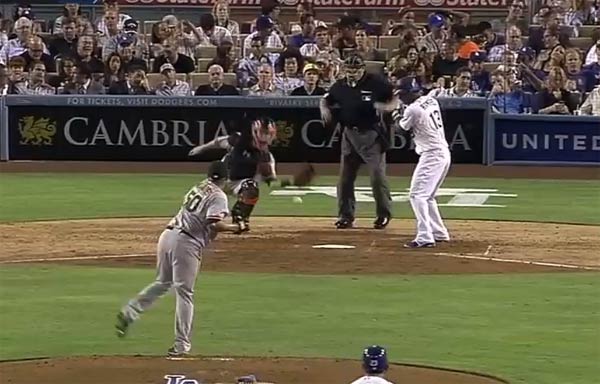 But it doesn't really look like it's close to a strike—Jose Molina would probably get a called strike on it, but whatever—and even if Hanley Ramirez decided to swing at it it's not in a hittable location. Mijares basically throws a good pitch that he's not trying to:

But the truly worst intentional ball thrown this season was by the Brewers' Tim Dillard, to Brandon Belt. 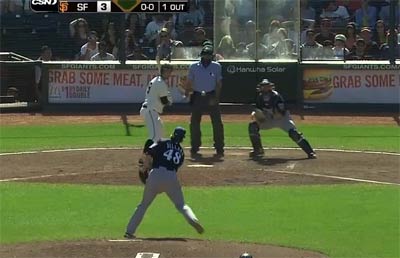 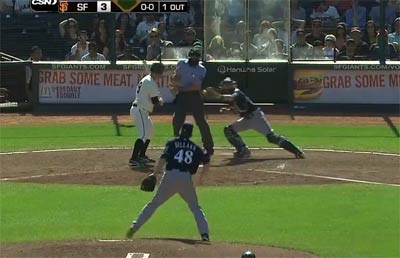 It's clearly hittable, but it is not, alas, so hittable that Brandon Belt had no choice to hit it. And so we missed out on a potentially much-more-GIFfable event.
So I guess the question is, if pitchers are so bad at this—even only occasionally—is there a way around it? Could a pitcher, for instance, simply wind up and toss the ball a few inches, go pick it up himself, do it again, and walk the hitter without ever risking this or this? I don't see anything in the rules about it, though to be honest I'm not going to spend more than 45 minutes looking. But at a certain point, I suppose, some tasks shouldn't be too hard for professional athletes to just go ahead and do. Throwing an intentional ball would qualify.

You need to be logged in to comment. Login or Subscribe
granbergt
A great way to start the week. Thanks!
Reply to granbergt
bobbygrace
In case you were wondering, Charlie Furbush got away with the IBB WP shown here, although the Mariners went on to lose the game.

Earlier in the inning, Furbush had picked off base-stealer extraordinaire Coco Crisp (on whose unimaginable base-stealing genius see R.J. Anderson's piece at http://www.baseballprospectus.com/article.php?articleid=19196). Perhaps feeling amped and cocky, he proceeded to walk Jemile Weeks, who then stole second and, as shown here, advanced to third on the IBB WP.

(Other references: box score at http://www.baseball-reference.com/boxes/OAK/OAK201207080.shtml)
Reply to bobbygrace
lyricalkiller
Notably, Weeks' stolen base came on a non-intentional ball in the dirt that would have been a wild pitch had Weeks not been running.
Reply to lyricalkiller
delorean
SF Giants involved in all three Best (Worst) Intentional Balls. This seems statistically significant.
Reply to delorean
lyricalkiller
Also won World Series. Causation proven!
Reply to lyricalkiller
SteveOSama
geez, I thought OPSBIs were dead, and then well there ya go
Reply to SteveOSama
matthewverygood
For whatever reason, Clayton Richard has trouble with non-pitching throwing. Intentional walks, pickoff throws, fielding grounders. It's a blessing when he fields a chopper and only needs to throw underhanded to Alonso for the out.
Reply to matthewverygood
jrfukudome
Did anyone swing at an intentional ball?
Reply to jrfukudome
lyricalkiller
Not this year
Reply to lyricalkiller
seeinred
A pitcher could intentionally walk someone with no runners on base with the "throw it a few inches" approach, but it would be on 4 balks. Probably not a great idea with runners on base, though.
Reply to seeinred
seeinred
Actually, although it's a balkable action, apparently it doesn't count as a ball with no one on. All it would get is an admonishment from the ump I guess.
Reply to seeinred
gweedoh565
...and four ump-frownies equals one ball, so...
Reply to gweedoh565
lyricalkiller
What's the rule, if you know it? I didn't see a minimum-length requirement for a pitch but there's got to be something.
Reply to lyricalkiller
seeinred
Rule 8.01(d) Comment: A ball which slips out of a pitcherÂ’s hand and crosses the foul line shall be called a ball; otherwise it will be called no pitch. This would be a balk with men on base.

It doesn't say anything about doing it intentionally, but I have to imagine it applies.
Reply to seeinred
seeinred
Aaaand I suck at replying again
Reply to seeinred
doctawojo
For someone like Furbush or Diekman or Richard, you wonder if the batter, on ball three, should swing to get the count to 3-1 and make the guy have to throw one more pitch, increasing the odds that he screws it up. (You probably should not get yourself to 3-2, though.)
Reply to doctawojo
seeinred
I was thinking that same thing. It's probably a good way to save the pitcher 3 (or 4, in this scenario) pitches the next time he wants to put you on though I bet.
Reply to seeinred
Sacramento
You wouldn't need to balk. Just go to your mouth four times while standing on the rubber.
Reply to Sacramento
seeinred
Oooh that's a good call. You'd probably rack up some fines, but at least you'd keep that pitch count down. I think for that one you just need to be on the mound, too, not even the rubber.
Reply to seeinred
jfranco77
Hypothetically, the pitcher could switch places with the first baseman and have the 1B throw 4 wide ones, if the pitcher really can't handle it.
Reply to jfranco77