Did you ever wonder what goes through the mind of an editor of one of those back-of-the-magazine crossword puzzles? You know, those puzzles filled with, like, 15 clues all based around the name of, say, your favorite television show? Where the words intersect on one letter at most and the most complicated clue is "the dominant color of Superman's uniform"?

Well, I can't promise to know exactly what one of these editors might be thinking, but I bet I can give you the next best thing. In the back of the 2008 "Official Chicago White Sox Magazine" is a baseball-themed puzzle of that caliber. By taking a look at each clue, we should be able to get a good sense of what this mind-numbing job might be like. Let's see what we find! 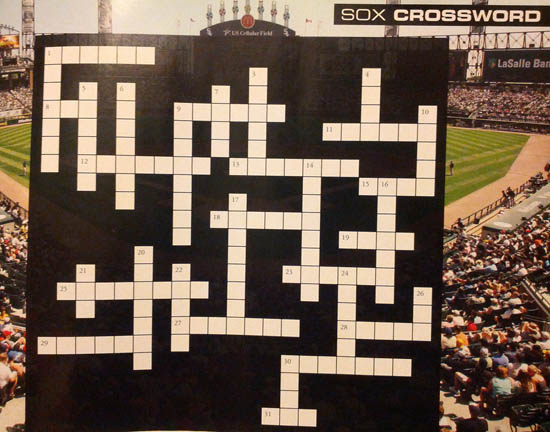 And now the clues. A better look at the clues, including commentary on each, is below. (Amazingly, the answers to this crossword puzzle are still available on the White Sox website nearly five years later.)

1. The Division in which the White Sox currently play. A.L. _______ (The puzzle starts off strong and simple, though this clue does hint at some forthcoming grammar wonkiness.)
8. Jim Thome led the 2007 White Sox with 96 of these: ___ (Good to know which side of the RBI/RBIs argument the White Sox Magazine editors fall on.)
9. This player's uniform, No. 3, was retired by the White Sox in 1989 (The puzzle only has room for Harold Baines' last name, though you wouldn't know that from the clue.)
11. Former left fielder for the White Sox was named AL Rookie of the Year in 1983 (Another case of the last name blues…)
12. Nicknamed "Spanky," he played first base for the White Sox in 1983. Mike ______ (…which makes this clue all the more interesting. I think the crossword is telling us something about just how well-known Spanky Squires really is.)
13. The last few weeks of the regular season games; also known as the _____ race (Would they call it something else following the 2012 White Sox's September?)
15. Nickname for White Sox broadcast personality known for saying 'He Gone' and 'Put it on the Board' (Fun capitalization here. Also, I think some of us might have different nicknames for this particular broadcaster.)
18. In 1959, this catcher drove in 84 runs and hit 22 homers, making the White Sox the American League champions (Maybe I don't know White Sox trivia well enough, but Sherm Lollar seems like a stretch to make a crossword puzzle such as this.)
19. The famous 1983 slogan, 'Winning ____' (This is a better slogan than some of the others found here.)
23. The 1977 White Sox were also known as "The Southside ______" (Considering the source of "The Southside Hitmen" nickname, this doesn't seem like a very family friendly name to embrace.)
25. Old ______ __Park (The space in the line there is a "sic" from the magazine. It really throws a wrench into the whole puzzle.)
27. Current White Sox 1st baseman and captain of the team (The crossword editors were very keen to save a few characters in the word "first".)
28. He became the 23rd player in history to reach the 500 homerun milestone (All this clue does is make me sad to think that Jim Thome might not be in the league next year.)
29. A person who swings from both sides of the plate is called a switch ______ (A strange choice here, to make "switch-hitter" two distinct words.)
30. The rules the White Sox followed on their way to the 2005 World series: _______ Ball Rules ("Grinder Ball"? Really? Whew. Glad I missed that.)
31. This 2nd baseman spent 14 seasons with the White Sox, and made 10 All-Star teams, starting in 1949 (At least Nellie Fox gets shoehorned in somewhere.)

1. This 2007 Gold Glove-winning shortstop is one of the newest additions to the team (This may be the most praise Orlando Cabrera has received in a magazine since 2007.)
3. The White Sox retired this former pitcher's uniform, No. 19, in 1987 (The Wikipedia entry for Billy Pierce has roughly nine paragraphs wondering why he isn't in the Hall of Fame.)
4. Frank "The Big ____" Thomas (Crossword's getting tough here…)
5. "The Cuban Comet" (Also, a bit lazy.)
6. This famous 3rd baseman of the 1990s won a total of six Gold Gloves (No reference to a certain fight with Nolan Ryan? For shame!)
7. This catcher's uniform, No. 72, was retired by the White Sox in 1997 (How did it take so long for Carlton Fisk's number to be retired?)
9. A runner can be called 'out' for running outside the _____ (If you notice in the image above, the blank lines in each clue are actually individual underscores. This clue has only five underscores. Someone thought the answer was "lines".)
10. A former owner, known for a variety of promotional stunts including the "exploding scoreboard" (Another famous name being tacked onto the edge of the puzzle here.)
14. The former Sox infielder was elected to the Baseball Hall of Fame in 1984: Luis ________ (Back to the first name thing. Why does Luis Aparicio need his name here as an additional clue when Billy Pierce doesn't?)
16. The 1930s and 40s shortstop who was often a leadoff hitter: Luke _______ (Or Luke Appling? I'm beginning to think the editors weren't really paying attention to this puzzle.)
17. The term for the offseason when a lot of player transactions occur (Most crosswords say "two words" or something similar when the answer has a space in it.)
20. The "Sodfather" Roger _______ ("The Sodfather" is definitely a White Sox thing.)
21. He is the new third base coach for the White Sox: Jeff ___ (Well, at least this one makes sense.)
22. He tied the record for 41 consecutive batters retired in 2007 (Mark Buehrle re-set this record in 2009.)
24. Popular 3rd baseman of the '70s "Beltin Bill ______ (The lack of an apostrophe on "Beltin'" makes me think Bill Melton was from a town called Beltin.)
26. This current White Sox outfielder leads all American League outfielders since 2005 with 103 home runs and ranks second with 283 RBI (Talk about arbitrary endpoints…)
30. The nickname for the 1959 American League Champion White Sox: __-__ White Sox (This clue would have been better if it had something to do with gogo dancers.)

So what did we learn about back-of-the-magazine crossword editors? Mostly that this is a job I would never want (even if it's about baseball)!

You need to be logged in to comment. Login or Subscribe
padresprof
No, no, no. Everyone knows the Sodfather was Jim Morrison... former third baseman for the White Sox.
Reply to padresprof