â€‹1. Matt's Old Red Sox T-Shirts
This holiday season, there is nothing more thoughtful, nothing more sincere, nothing that says "I love you" so much it borders on criminalization, than the gift of my old Red Sox t-shirts. "Well," you might say, "If your Red Sox t-shirts are so 'wonderful,' Matt—if that is your real name—why are you selling them?" You see, over the last six months, the Red Sox have set about ridding themselves of every single player whose t-shirt I own. Searching through my drawers, I find myself the owner of Josh Beckett, Carl Crawford, and Adrian Gonzalez t-shirts that I can’t wear. (I can’t wear t-shirts from players who play on other teams. As if. But you totally can.)

Also, the flaming mess that is Daisuke Matsuzaka has moved on to greener pastures where he can practice the ancient Japanese art of Nokoroko, which is the art of irritating fans by nibbling around the strike zone. The only remembrance of his time in Boston is the faded blue and white shirt for which I once paid $21.99. This is to say nothing of J.D. Drew’s insistence on retiring so he can “be with his family,” which I presume he “loves.” Oh, cry me a river, ya know? You can’t come back for one more season? I got this t-shirt here and everything! But no. One more I can’t wear.

But, my loss can be your gain this holiday season. So when you think Christmas, think my old Red Sox t-shirts. They are the perfect gift for anyone ever, at any time. And then send me a check, huh, because seriously, I’m done with these things. —Matthew Kory

2. Matt Holliday Signed Memorabilia
In my multi-religious (she's sorta Jewish, I've got Catholicism in my blood and precious little but misanthropy in my heart, and let's leave the cats and whatever bloodthirsty deity they worship out of this) household, we celebrate Christmas, but we're more about "the holidays," that bane of Ben Stein, so I could think of nothing better when queried about gifts for the season, though I do confess that some might consider this a better White Elephant gag gift than an actual present for a loved one, and I further note both that the ultimate White Elephant gift is probably an A's cap along these lines and that I should apologize in advance for the horrendous one-note, one-punchline joke that this sentence/paragraph represents, than to suggest that you acquire a little bit of Matt Holliday signed schwag and give it to the Cardinals fan to whom you are closest in either an emotional or physical (or both) sense. —Jason Wojciechowski

3. Baseball Voices
I think it is amazingly cool that I can watch a major-league game on my cell phone. Yet, while I embrace such technology, I am also old school at heart and I like listening to radio broadcasts of games. With its ebbs and flows, baseball is the perfect sport for radio. You don't have to listen to every pitch to know what's going on, the inflections in the broadcasters' voices will say when to pay attention. With that in mind, some of the best Christmas-related gifts I've received in recent years are from the "Baseball Voices" series produced by Chicago Cubs radio play-by-play announcer Pat Hughes. Each CD profiles and features famous calls from a legendary broadcaster, including Ron Santo, Bob Uecker, Harry Caray, Milo Hamilton, Jack Buck, Marty Brennaman, Red Barber, Harry Kalas, Dave Niehaus, and Bob Prince. Needless to say, the Santo one is hilarious, as he and Hughes teamed up to make every Cubs' broadcast a blast. More information can be found at www.baseballvoice.com —John Perrotto

4. A Copy of Extra Innings: More Baseball Between the Numbers
Like a fair amount of people, I got into baseball because of my father. We'd go to the local minor-league park together, we'd watch the Cubs and White Sox on TV and talk about them over the paper, we even toured different ballparks around the Midwest together. But in recent years, we've had a harder time talking about baseball than we used to—my dad likes his scrappy white guys, and I'm a Dread Sabermagician.

But my dad read Extra Innings: More Baseball Between the Numbers with relish. (Even the parts I didn't write!) And now we have more stuff to talk about. If you have someone in your life that's never touched Bill James or Nate Silver but loves baseball, you could do worse than to give them a copy. And maybe you'll have more to talk about afterward, too. —Colin Wyers

5. A Forest Face
When searching for the perfect gift for a friend or loved one, I always start with Skymall. Their selection of unique, quirky gifts is second to none.

This year while perusing Skymall's offerings I found what I believe to be the ultimate gift for any baseball fan. I paused briefly at the Wilson Betemit signed baseball, the Yankees Freeze-Dried Grass, and the Official Sports Toaster before arriving at the Holy Grail of Sports Gifts: The Forest Face. 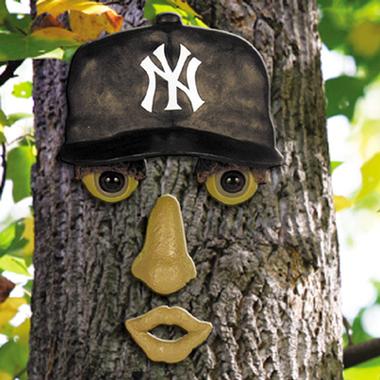 From the description: "The newest craze in outdoor decor, Forest Faces attach to trees, fences or even walls outside your home or campsite, and let visitors know which team you're rooting for." Is your intended recipient a college sports supporter or a pro football fanatic? Skymall's got you "covered" with both NCAA and NFL Forest Faces!

I think Skymall reviewer wld513 said it best: "Love my mlb forest face! Its just what my tree needed!!"

Forest Face: Just what your tree needs, and totally not creepy at all. —Ian Miller

6. A Time Machine
A time machine. For myself. There are lots of things we don’t know about baseball history, but one thing that has always driven me crazy with curiosity is the history of the matchup between Walter Johnson and Ty Cobb. They played in the same league during each of Johnson’s 21 seasons in the era of eight-team leagues, and it’s been suggested that they faced each other more than any other batter-pitcher combination in history. However, we don’t really know this for sure. The current champ from available data is, I believe, the Stan Musial-Warren Spahn matchup. They had 311 known matchups, per Baseball-Reference.com, with Musial hitting .323/.413/.580. That doesn’t include anything before 1948 and likely has gaps after that. Johnson-Cobb likely blew that way. All things being equal, Johnson would have averaged about 95 starts and 19 relief appearances against the other seven AL teams over the course of his career. Cobb averaged 4.33 plate appearances per game during the time Johnson was in the majors. Let’s take a giant leap and assume that extra-inning games and Johnson’s relief appearances balance out the missing at-bats from the few games Johnson didn’t complete, or that Cobb missed. That would have given Cobb around 411 plate appearances against the Big Train.

So I would love a time machine that would allow me to watch all those matchups and keep track of what happened. Guess that’s not very holiday giftish, but oh well. The reported results would be gift to us all! —Bradford Doolittle

7. A Baseball
For those of considerable net worth, it is not a very elaborate gift—a good "stocking stuffer," especially if you want to weigh down the stocking to weaponize it. I have little practical purpose for owning a baseball. I haven't played catch in a long time, and there is a zero percent chance a game will ever break out on my street. Yet I love having it. Not to brag, but I actually have two baseballs, one that I bought to play catch with and one that I found in some bushes soon after the purchase—highly unfortunate timing.

Even if your recipient is catch-averse, it's also great for people who just like playing with things. When I was writing about baseball, I'd often walk around holding one that I scooped up during batting practice, just to quell something of a manual fixation. Plus, if your recipient happens to be a loser who would be swayed by pressure to "throw it back," your gift can serve as a replacement ball so he or she can keep the home run souvenir. —Zachary Levine

8. An IOU for a Stadium Trip
The biggest problem for shopping for a baseball fan during the December holidays is that the obvious present "Hey, let's go to a game!" isn't available. If only Jesus, the Maccabees, Dr. Maulana Karenga, and the people on Seinfeld had been bigger fans of July. But fear not. If your friend, significant other, sibling, or parent is a baseball fanatic, and you want to get her/him the perfect baseball gift, may I suggest that you do the following: Give an IOU for a trip to a baseball stadium that your loved one has never been to before. Worried that it doesn't "count" because you'll have to wait a while? Have a little fun planning out the trip in advance.

Then, some weekend when baseball is back in season, get in the car, drive together a couple hours to a new stadium (no other MLB team in driving distance? Try a minor-league game!). Have lunch or dinner together, take in the game, take a couple of pictures to prove that you were there, and then go home. Get some milkshakes at a rest stop on the way home. Trust me. Your loved one gets to cross another park off the bucket list (and as a baseball fan, trust me, we all have that bucket list), and you both get to spend a wonderful day together. And that's the whole point of the season. —Russell A. Carleton

You need to be logged in to comment. Login or Subscribe
Vicmill1
The true baseball fan might be one of the most difficult people for whom to buy a Christmas gift. He/she usually has everything she/he needs or can afford and we, the benighted loved ones, don't know enough to make wise choices. We usually wind up buying something irrelevant or just dumb in the sad eyes of the designated recipient. "Gee whiz, a replica bat. Thanks, Dad...For the Blue Jays. Neato..."

That's why your gift list above is a welcome aid for the puzzled Secret Santa in every real fan's life.
Reply to Vicmill1
jfranco77
How is there no Baseball Voices for Vin Scully? This is a travesty!

Also, I now require a Yankees Toaster.
Reply to jfranco77
Oleoay
9. A fantasy baseball subscription.
Reply to Oleoay
SteveOSama
10. A BP subscription...that's what I got!
Reply to SteveOSama
beeker99
My in-laws bought me the Yankees forest face for Christmas two years ago. I am 99.9% sure they did not get it from SkyMall.

Yes, it is hanging on a tree in my yard. I think its kind of neat, though indeed a little creepy.
Reply to beeker99