In the early 1980s, the Japanese sporting goods company Mizuno, who claimed to be the "biggest producer of sports equipment in the world", held an annual exhibition in New York to showcase their advances in sporting goods. It was a brash time: the Cold War was finally moving towards the Arnold Schwarzenegger/Jim Belushi buddy-cop movie era, Michael Jackson was starring in epic music videos, and computers were advancing at a terrific speed. Mizuno was taking full advantage of this exciting time by pumping millions of dollars per year into the research and development of more "safe and electronically-advanced baseball equipment". What exactly did this mean thirty years ago?

In 1981, George Sheldon, the exclusive distributor of Mizuno gear in the United States, claimed "Such innovations as electronic foul lines and strike-zone sensors will take much of the discretionary factor out of umpire rulings and insure more accurate calls." That wasn't the technology being showcased at these New York exhibitions, however. One basic advance that Mizuno showcased was a uniform "specially constructed of a 'perspiration-control' fabric with maximum ventilation and added padding in the shin area." Another was a "see-through fielder's glove" that gave the fielder a bit of a glare shield for balls high in the sky. They also showed "a six-finger glove … an aerodynamically-designed one-piece uniform … shoes with removable spikes, and a plexiglass catcher's mask". 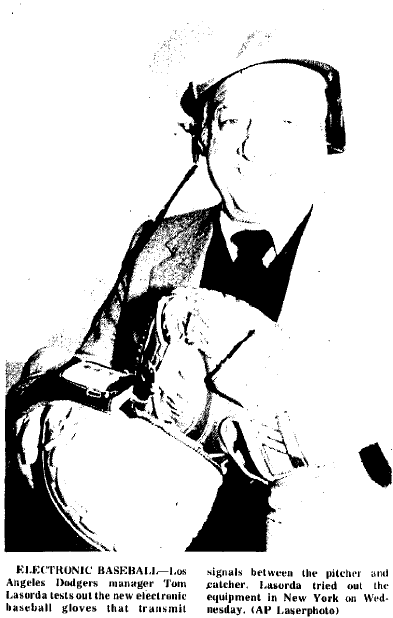 The big draws—the items that all the newspaper articles were written about—were much more ambitious. The electronic catcher's mitt, for example, was meant to eliminate that "old-fashioned" method of a catcher dropping down signs. Instead, he would press buttons in his mitt that would be relayed to the pitcher's mitt (through it's own, secure radio frequency, of course!), lighting up a display panel telling the pitcher what he wanted thrown. The pitcher could then press his own buttons to accept or shake-off the sign.

Or the Mizuno wall sensor, which would beep at players as they approached the wall. The beeps would "become louder and more frequent with each step toward it."

Then there was the Mizuno Audio Receiver System—MARS—a highlight of each year's exhibition. The MARS unit was an "electronic device that fits in a manager's hand and can be programmed to convey voice signals to batters, baserunners and coaches, who naturally wear helmets equipped with a miniature receiver." Basically, with MARS, every player would go to bat with a wired-helmet. Instead of relaying signs to the third base coach, the manager could press a button on the MARS handset that would then speak the word "squeeze" or "slide" or whatever in the correct player's ear.

In a 1983 article, Jim Darby, a Mizuno partner, is quoted as saying "We submitted [the MARS] to the rules committee and they turned it down, but they didn't blow us out of the water. They told us to keep working on it. They said maybe a practical application could be found for it, like relaying signals from a pitching coach to a catcher." In that same article, it was also said that "the MARS unit has been tried on the college and semipro level." However, in 1986, the Miami Herald reported that MARS "although approved by the NCAA, has never been used by a college team. It has yet to be formally introduced to the Major League Rules committee."

And the electronic catchers mitt?

In a 1984 exhibition game between the San Francisco Giants and Stanford University, however, the fifth 90-mile-an-hour pitch crushed the computer in the catcher's mitt.

Mizuno is still a major player in the sporting goods market, generating nearly $2 billion in revenue in 2010, with endorsements from stars like Andrew McCutchen and Ichiro Suzuki. The high hopes of those early-80s R&D binges didn't pan out—of the electronic projects, only the strike zone "sensors" George Sheldon mentioned back in 1981 seem to be a technology we still use today and they 1) are in a much different form than anyone would have been able to imagine in 1981 and 2) have nothing to do with Mizuno—but the ideas are fun to look back on (and maybe even a little intriguing). I, for one, look forward to the day Clayton Kershaw receives his signs from A.J. Ellis through a series of lights embedded in his mitt. It's only a matter of time.

You need to be logged in to comment. Login or Subscribe
Oleoay
Perspiration-control fabrics, six-finger gloves and removable spikes are in use today. In fact, you can screw and unscrew certain kinds of spikes depending on the kind of field/turf you're playing on and the position you're playing... not just in baseball, but football, soccer, etc. There are also some gloves with see-through mesh for webbing.

Reply to Oleoay
lgranillo
Ah, yes. You're right. I knew that for most of them, but I was too focused on the big things... Thanks.
Reply to lgranillo
Oleoay
Nice to know that a decade later, I still get a bit of value out of working at a Nike customer service call center :)
Reply to Oleoay