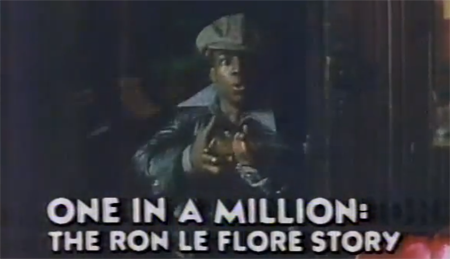 In 1973, Ron LeFlore was a 25-year old sitting in Jackson State Penitentiary for armed robbery who had never played organized baseball before. He joined the prison baseball team and, through a fellow convict's friendship with Detroit Tigers manager Billy Martin, LeFlore was granted a one-day tryout with the Tigers at Tiger Stadium. He did well enough for the Tigers to offer him a contract, which was enough for the state to grant LeFlore his parole. He spent the rest of 1973 in the minors, but played 59 games with the big league club in 1974. In 1976, LeFlore was an All-Star and, in 1977, he hit a career best .325/.363/.475.

In September 1978, a made-for-tv movie called "One In a Million: The Ron LeFlore Story" aired on CBS, showing the world the inspirational story of Detroit's centerfielder. The film starred a 21-year old Levar Burton fresh off his success in "Roots" as LeFlore. Billy Martin, who was back managing the Yankees by then, played himself. The movie also featured cameos from Norm Cash, Al Kaline, and Bill Freehan.

Thirty-five years later, this isn't a movie that can be found very easily. It's not available on Netflix or Amazon and even YouTube only has a few clips totalling roughly twenty minutes of the 100-minute film. Still, the scenes that can be found show an earnest movie that gives a nice glimpse at baseball in Detroit in the 1970s. Burton, as expected, seems more than capable of the role (if not a little young) and even looks good snagging flies on the field (assuming Burton was doing his own work in the field). Martin, surprisingly, acquits himself well in the screen time available to us.

Being a made-for-tv movie, there are some clear weaknesses that are easy to see even in the 20-minutes we have available. Some selected dialog from "One In a Million: The Ron LeFlore Story":

Ron's father: "My son is here for a tryout. Ron LeFlore."
Security guard, with all the enthusiasm of a stuffed penguin: "Yeah."
"Ask Mr. Martin himself."
"Yeah"
"Listen, we are already late, now get on the phone, call Mr. Martin and tell him that Ron LeFlore is here for a tryout."
"Ok, don't get excited, sir."
=======
Norm Cash: "A convict, Billy?"
=======
(Heavyset bigwig in dark suit and glasses walks up to Billy Martin at the batting cage)
"Say Billy – who's that guy out there?"
"That's my long lost son!"
"Come on, Billy!"
"You come on. Leave him alone."
"Come on, Billy!"
"I mean it, leave him alone!"
(Bigwig walks away)
(Two minutes later, bigwig comes back smoking a cigar)
"Five to fifteen, armed robbery."
"Yeah, and I helped him bust out last night!"
(Bigwig walks away, annoyed at Billy.)
=======
(Ron hits a blast in the batting cage.)
Bill Freehan: "Lord!
Cash: "Save those for the game!"
Al Kaline: "They say this guy can really run."
Freehan: "He can't run too good or else they wouldn't have caught him."
(Everyone laughs.)
=======
(In a game at Tiger Stadium, Ron steals second)
Racist guy in stands two rows in front of Ron's family: "Everyone knows he can steal. That's what he went to the penitentiary for."

The videos can be found below. It's a shame that this movie can't be found anywhere else. The baseball scenes look pretty solid, especially for a 1970s made-for-tv movie—I love those behind-the-scenes shots of Tiger Stadium—and a young Levar Burton is always worth watching.

As for LeFlore, he finished his career with the White Sox in 1982 and spent some time in the Senior Professional Baseball Association years later, where he hit one home run and stole four bases. In 2009, Sports Illustrated's Jeff Pearlman reported that LeFlore and his wife were living month-to-month on his MLB pension checks.

Ron is released from prison. Don't miss the two-minute silent montage of Ron finally getting his freedom.

Ron's tryout with the Tigers.

Ron in his early games as a member of the Tigers.

Sigh.
Reply to flyingdutchman
beerd90210
I remember watching this movie as a kid. turned me into a ron leflore fan, for sure.
Reply to beerd90210
Michael
LeFlore's career path seemed similar to "Gates" Brown, a Tiger outfielder about a dozen years earlier who also was the batting coach during much of LeFlore's time with the Tigers.
Reply to Michael
jnossal
So, how is the fan's comment racist, but Freehan's is not? Or did the TV credits list the character as "racist fan"? Or maybe there were other, less quotable (and typically Detroit) lines left unsaid here.
Reply to jnossal
lgranillo
For one, I'm pretty sure the fan ended the quoted sentence with a racial comment, but it was unclear enough that I didn't write it here. But mostly it was because they cut back to the fan like 5 different times for his obvious contempt for LeFlore. The Kaline/Freehan exchange was quick and was said much more jokingly than what the fan said...
Reply to lgranillo