OK, two things to walk back in that paragraph. 1. One of the teams that gave up all that to get Greinke also got back a lot of all that to get Greinke; the Brewers didn’t know or expect or probably hope they’d be cashing Greinke out just before he hit free agency, but it might be more fair to say that Greinke’s teams paid all that for Greinke and the expectation of a compensatory draft pick or something like that. 2. Declaring Greinke nothing of an ace sells short how difficult Greinke is to define, even now after nine seasons. He’s a peripherals ace: the eighth-best FIP in baseball over the past three years, slotted between Felix Hernandez and Madison Bumgarner, ahead of Sabathia, Price, Weaver. Peripherals are significant; they might be the most significant thing, until they persistently diverge from the actual results. Greinke has the 41st-best ERA+ over the past three years, between Wandy Rodriguez and Derek Holland.

Rarely do the differences between WAR, WAR, and WARP get in the way of most routine analysis; the numbers are usually fairly close, within the margin for error and doubt that we should allow for any of them. But Greinke is an example of a player who is one thing on one site and a very different thing on another. From 2010 to 2012 (which excludes his universally acclaimed 2009 season, which we’ll get to):

The difference, basically, is in how much blame each model puts on Greinke for underperforming peripherals, with FanGraphs putting no blame on Greinke. How did Greinke’s 3.16 FIP over the past three seasons become a 3.83 ERA?

1. Greinke was much less effective with runners in scoring position. From 2010 to 2012:

Pitchers aren’t generally able to control the sequence of the hits they allow. Greinke’s struggles with runners in scoring position have an added element of BABIP trauma:

The default way to look at this is that it's bad luck on top of bad luck, unless we have reason to think that it's part of Greinke's true tendency. Three years of a split won’t tell us much about a pitcher's true tendencies, and here we are working with just 350 batted balls. If each “extra” hit cost Greinke a run, this explains about 40 percent of his FIP/ERA discrepancy over the past three years.

Luck is a hard thing to draw conclusions about. Luck manifests itself in BABIP with runners in scoring position, and in the defenders a pitcher’s GM puts behind him. It also shows up in a billion other ways that we would never consider: whether a first-base umpire decides to call a balk on him; whether he slips in the shower and tweaks his knee; whether he finds true love. Also in whether his catcher does him extra favors. Greinke spent a year and a half pitching mostly to Jonathan Lucroy, one of the best framers in the game. But before that, and after that, he threw to Jason Kendall and Chris Iannetta, two the worst. Luck is so messy!

We still don't know whether Greinke is going to be an ace, though. There's also, for instance, the matter of Greinke's 2009 season, which points to Greinke's ability and upside. That season is a marvelous outlier right now; he's one of just nine pitchers since WWII to top 200 innings and a 200 ERA+, but his next-best ERA+ is just 125. There isn't really much precedent for a pitcher being that good while otherwise never being any better than that. If we lower the bar to 180 and 180, there are 27 pitchers who have had such a good season since WWII. Seven of them repeated the feat. Here are the 20 who didn't repeat, with their second-best ERA+ (minimum 150 innings):

Greinke's position on this list is arguably good news for the Dodgers. It suggests that when a pitcher shows an ability to be as good as Greinke was in 2009, he usually pitches like an ace more than once. Or it just mean the Dodgers just bought themselves an outlier. That happens, too.

I saw a tweet recently about Jack Morris’ Hall of Fame case. I can’t find it and don’t know who wrote it, but basically it said that the case against Morris is simply that he didn’t do a good job preventing runs from scoring; the case for him is the one that requires all sorts of mental gymnastics. There’s nothing wrong, in this case, with using a lot of gymnastics to try to really get to the heart of Greinke’s performance; there’s genuine cause to consider him better than his runs allowed suggest. But there’s also a very simple and not-necessarily inaccurate case to be made that he’s only okay at keeping runs from scoring. Last year, Sky Kalkman looked at ERA predictors and came up with this graph: 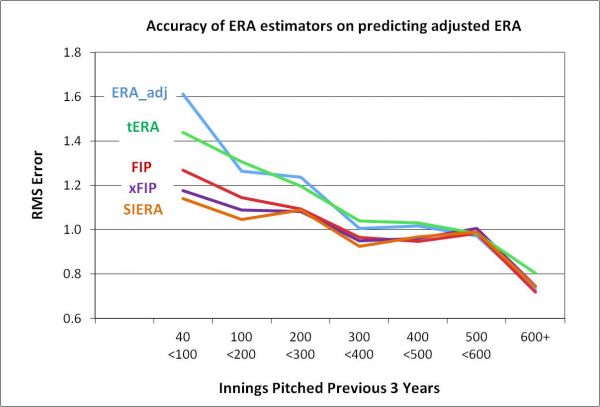 Adjusted ERA, after 500 innings, is as good as anything.

PECOTA, meanwhile, projects Greinke to be the ninth-most valuable pitcher in baseball this year, better than Matt Cain and Cole Hamels, and nearly four wins better than Aaron Harang, whose innings Greinke is likely to replace. PECOTA says a rotation of Kershaw, Greinke, Beckett, Billingsley, and Capuano would produce more WARP than any rotation currently constructed, though construction around baseball (and perhaps in Los Angeles, even) is ongoing.

So have we decided whether Greinke is an ace yet? Not at all, though the market has decided he is. Funny thing about the market, though, is that it doesn’t seem to distinguish between the very best starters and the very good starters. Over the past five years, the following pitchers have hit the free agent market or signed an extension within a year of impending free agency:

Remove Halladay’s gift to the Philies and Darvish’s post-and-sign free agency, and there’s very little daylight between the contracts; the gap from the lowest annual value (Cain, at $21.25 million) to the highest (Sabathia, $24.5 million) is about the equivalent of a half-win on the free-agent market; everybody got six years except for Sabathia and Lee, and only one got seven. The difference in performance between these pitchers is more substantial. Each pitcher’s ERA+ in the three years prior to signing the contract:

You need to be logged in to comment. Login or Subscribe
DrSeth
Most of the other articles I read focus on the money, but this briefly mentions that they could have the best rotation. Seems to me that players like AGon, Hanley, Crawford, and even Beckett are reclamation projects. Is this a 95 win team as the roster stands today? Expensive corpses can't dance.
Reply to DrSeth
anderson721
Indeed, the Dodgers seem to be modeling themselves after the Redskins of a few years ago. I expect similar results.
Reply to anderson721
mhmosher
I don't. That team is all kinds of nasty. Who knows what happens in the playoffs, but they are a heavy favorite to be one of the five teams from the NL. That's more than those Redskins could say.
Reply to mhmosher
Oleoay
Well, in terms of building a winner, Agon/Hanley/Greinke's a better way to do it than Buehrle/Reyes/Bell especially when you already have Kemp, Kershaw, etc.
Reply to Oleoay
sahmed
This was outstandingly thorough. Avoided making any firm conclusions while illustrating a pretty robust picture. I feel like I learned three articles' worth here.
Reply to sahmed
DetroitDale
There are rumors of LA following up this signing of Greinke with a run at Anibal Sanchez. If that happens you might as well carve their name on the NLCS trophy now.

When I was a young kid in the late 70's early 80s, the Dodgers were my second favorite baseball team. Looking forward to a 2013 Tigers Dodgers World Series.
Reply to DetroitDale
RedBux
I am starting to see more analysis using ERA+. Could someone explain the statistic. I believe 100 is league average? I haven't seen it displayed in player cards. I was wondering if they will be included in the player cards and the Prospectus. Thanks.
Reply to RedBux
lyricalkiller
ERA+ takes a player's ERA, adjusts for ballpark, league and era, and states it relative to league-average. There are plenty of limitations to it, such as its dependence on ERA instead of a better stat, and I guess what you'd call scaling problems. Quick and easy and not *too* misleading is why I use it.
Reply to lyricalkiller
surfdent48
Luck is indeed so messy. For example: Career xFIP---Jeremy Hellickson 4.51 and Chris Volstad 4.26. Go figure.
Reply to surfdent48
gpurcell
The thing I hate about this contract from the perspective of the Dodgers is the buy-out--they have all the downside risk but their upside potential gain is limited.
Reply to gpurcell
jfranco77
But will he have a better defense behind him? The Dodgers have spent the GDP of a small European country and yet have Luis Cruz penciled into their lineup as a starter.
Reply to jfranco77
meanwhoogean
This article was fantastic. Really professional writing, and kicker.
Reply to meanwhoogean
jthom17
Greinke tendency to have more blow-up innings than an ace should hurts his fantasy value since it impacts his overall numbers not just wins/loses.
Reply to jthom17