A year ago, while Hall of Fame voters were considering their ballots, a brochure supporting the candidacy of Juan Gonzalez showed up in our mailbox. We showed you this brochure and discussed the meaning of such a brochure, and then Juan Gonzalez got four percent of the vote. This year's ballot, then, has no Juan Gonzalez, but it has many other players who deserve brochures but, so far as we can tell, have not had brochures made for them. This is a brochure for one of them. It's a brochure for Ryan Klesko, whom you should definitely vote into the Hall of Fame. (It's up to you, but you might want to review the Juan Gonzalez brochure before you move on.) 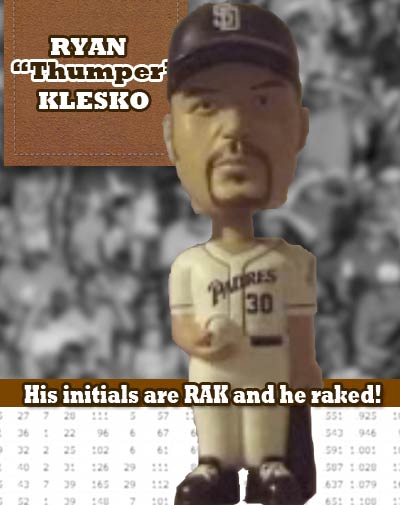 "Youth fades," Oliver Wendell Holmes wrote. "Love droops; the leaves of friendship fall; A mother's secret hope outlives them all." Ryan Klesko's mother is certainly evidence of this. When Klesko was nine years old, his mother went to the backyard of their Westminster, CA home and started digging. She built a pitching mound for Klesko to throw off of. But to whom would he throw? Not to his father, who injured his leg in an oil field. So his mother strapped on the gear and got into the squat. She caught him three times a week, even as he started throwing harder and harder—92 mph by high school. He once crossed her up and hit her on the shin with a pitch; she had to go to a doctor and "couldn't walk for a week."

Is Ryan Klesko a perfect person? Probably not. Is he the best baseball player of his generation? Not literally. Does his 23.7 career WARP raise the standards of the Hall of Fame? For closers, yes. But let's put him in the Hall of Fame anyway. Don't do it for him. Do it for his mom. His mom sounds like a peach, and I bet his mom would be really happy if her son was in the Hall of Fame. Confused, probably. Probably suspicious at first, and certainly confused for a long time, but when she sees him giving his induction speech at Cooperstown and there's an expensive plaque that somebody definitely made, she'll probably figure what's done is done and just go with it, and in that moment she'll be very happy.

Do it for his mom.

Tony Gwynn (Hall of Fame baseball player, 135 career home runs):
"When he gets on base, it's like watching Rickey Henderson." source

Atlanta Braves Club Official (Insider):
"Well, he hasn't killed anybody out there yet." source

Unnamed Scout (No reason to lie):
"I don't know why any righthander would pitch to him." source

Bleacher Report (Irresponsible Web Site):
"A player I have long suspected of being a juicer [but] … there is nothing there that suggests he used performance enhancers." source

1. In the summer of 1988, Klesko made the U.S. Junior Olympic team as a pitcher. According to Klesko, he threw 93 or 94 mph, but after throwing nine shutout innings against a team with three future first-round draft picks, he strained a ligament in his elbow. He continued to have arm soreness in his senior year of high school and dropped from the first round to the fifth, where he was selected by the Braves, who made him a first baseman full time. Eighteen months later he was Baseball America's no. 3 prospect overall, as a hitter. He has talked, post-retirement, about going back to the minors and trying to pitch. Which is to say that Ryan Klesko and Babe Ruth have an awful lot in common. (Babe Ruth was a great pitcher and a great hitter, and he is in the Hall of Fame.)

2. There's very little doubt that Pedro Martinez is going to make the Hall of Fame. You don't think so? You want to argue with this? You are crazy, son. You are out of your head, you jerk. Pedro Martinez was so good that he's a lock for the Hall of Fame and might have been the best pitcher ever. Well guess who wasn't so impressed? 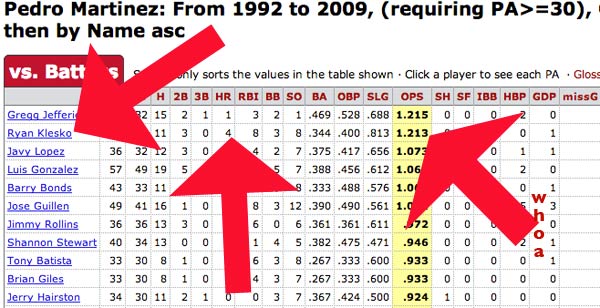 Gregg Jefferies wasn't so impressed. And neither was Ryan Klesko.

4. He overcame adversity. "Throughout his youth, Klesko had been hounded by respiratory problems — so much that he had to carry an inhaler around to prevent an attack. Offseason sinus surgery finally remedied that." Other people who had asthma: Jim "Catfish" Hunter, and possibly Bob Gibson. Both are in the Hall of Fame. Klesko would be perhaps the first hitter with asthma to make the Hall of Fame.

5. His other nickname was "Bam Bam," just like every other baseball player in history including all the Hall of Famers.

Ryan Klesko had a higher OBP than:

Ryan Klesko had a higher slugging percentage than:

Ryan Klesko had more hits than:

Ryan Klesko had a higher batting average than:

There are only 38 other players in history who can say all those things. Of the 22 who are retired and eligible for the Hall of Fame, 14 have been inducted, while others (Bagwell, Walker, Edgar Martinez) still might be. It's a home run!

Klesko had as many 100-RBI seasons as Rod Carew, scored 100 runs as often as Ron Santo, hit 30 home runs as often as Tony Perez and had a better fielding percentage than Ozzie Smith, Bill Mazeroski, Brooks Robinson and Willie Mays combined. Stolen bases weren't a big part of his game, but he did steal three times as many bases as Joe DiMaggio, while getting caught stealing fewer times than Rickey Henderson. He produced more WARP than Bruce Sutter, Rich Gossage, and Rollie Fingers.

But he is much more than just numbers. Please continue reading on Page 6.

1. Decorated his own condo, including "retro toaster," "beige chenille sofa," "an imposing four-poster canopy bed of dark wood, adorned with decorative scrollwork," and a "Midori green Oceanside glass tile that frames the bathroom mirror and forms the backsplash." "I think I did a pretty good job," he said.

2. He is an active supporter of important political causes, such as Agriculture Commissioner JB Powell's campaign. You should know that Powell's opponent is a special interest lobbyist, and

we don't need that kind of curveball in charge of our food safety.

As the van tears up the driveway, its doors swing open. The cops spring out of the vehicle as if their seats were on fire and dash toward the house. A team of snipers carrying AR-15 assault rifles surrounds the small, run-down house. One officer totes a boomer, a tool designed to break open doors. Others are armed with MP5 semiautomatic weapons and with handguns. Ryan Klesko, the 24-year-old left-fielder for the Atlanta Braves and an honorary deputy sheriff for Palm Beach County, Fla., waits for the last officer to exit the van and then follows closely behind, his cheek full of chewing tobacco and his eyes glowing with anticipation. Lots of people enjoy watching the TV show Cops. Klesko prefers the real thing.

Charles McCutcheon, the sheriff of Palm Beach County, presented Klesko with an honorary deputy's badge earlier this year. Klesko is proud of the badge and is determined to replace it with the real thing. He plans to take the necessary exams to become a reserve officer in the sheriff's department. "Then I'll actually get paid for my work," he says.

6. Involved in other business ventures:

Former Atlanta Braves slugger Ryan Klesko, a stalwart during the franchise's glory days, pointed a loaded gun at an ex-business partner's head and threatened harm to him and his family, a lawsuit filed last month in Houston County claims.

Wait what. Uh. Actually, the case appears to have been dismissed earlier this year. (Klesko's lawyer did not respond to an interview request.) Which means that Klesko gets credit for all the businessing and none of the alleged gun-pointing.

Ryan Klesko is a generous person who has given his time and resources to various causes, some charitable but some just because he's a good friend and relative. He pitched batting practice to the Braves after he retired, and has also thrown batting practice for high school, college, and San Francisco Giants batters. He is willing to throw even his cutter.

He founded the Blue Ryno Foundation, which helped the families of terminal ill children. Through Klesko's Kids Korner, he gave Padres tickets to kids with cancer. He won the Padres' Chairman's Award for community spirit. He bought his mom a condo. And at his 1,600-acre ranch in Georgia, he "hits a home run for clean air":

Klesko and fellow baseball player John Smoltz received a letter from the Georgia Forestry Commission’s Carbon Registry, confirming that their 1,600-acre Big “K” Tree Farm is the first forest carbon sequestration project to be registered on the Georgia Carbon Registry.

Page 9: The Back Cover 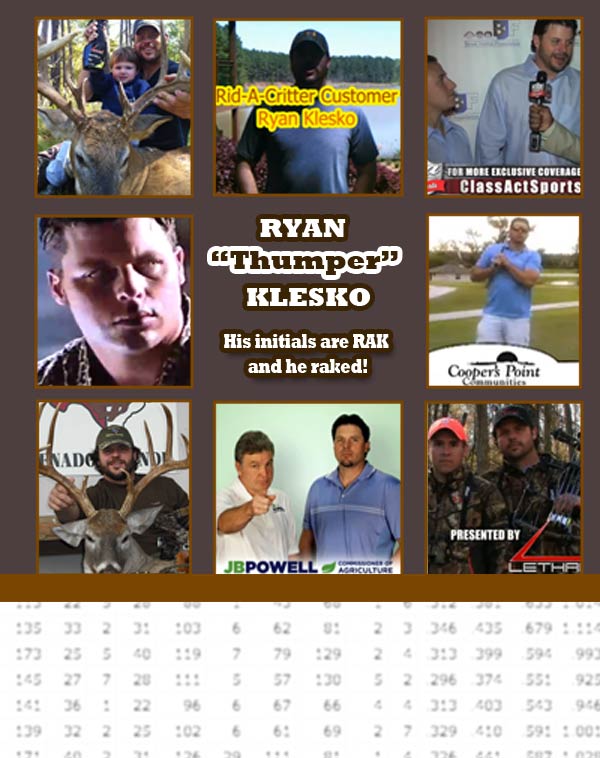 You need to be logged in to comment. Login or Subscribe
pizzacutter
Proven winner. Was on the 1995 Braves World Championship team.
Reply to pizzacutter
jfranco77
Also one of my favorite players to watch when I was a kid. Klesko for the Hall!
Reply to jfranco77
mblthd
On May 17, 2001, Klesko hit the hardest-hit ball I have ever seen.

Armando Benitez was pitching for the Mets, trailing 15 to 2 in the top of the 8th at Shea Stadium, with a 2-and-1 count on Klesko. He uncorked a 98-mph fastball around neck-high. Why Klesko would be looking for something up there is a mystery, but for whatever reason he was locked in on it before it even left Benitez's hand. Klesko turned on it and swung from his heels with everything he had, somehow keeping the bat level and squaring it up, and you could almost hear his whispered "oof" at contact.

Todd Zeile was playing first, holding on baserunner Mike Colangelo. The ball screamed over Zeile's head and was one-hopping the fence before Zeile even reacted by ducking/flailing, a purely self-defense reaction which wouldn't have made a difference. If the ball was a few feet lower it would have exploded his face before he even had a chance to flinch.
Reply to mblthd
bhalpern
Ryan Klesko hit .105/.105/.105 for his career against Omar Daal. DAAL for the HAAL!!!
Reply to bhalpern
SteveOSama
"and nearly all other baseball players"
Reply to SteveOSama
Hudsonbelinsky
I may have found a new catch phrase. "We don't need that kind of curveball in charge of our food safety!"
Reply to Hudsonbelinsky
tslavinsky
Recognized by the Georgia General Assembly...

http://www1.legis.ga.gov/legis/2009_10/fulltext/sr167.htm
Reply to tslavinsky
lyricalkiller
Thank you so, so much
Reply to lyricalkiller
tslavinsky
"...Mr. Klesko serves as an extraordinary role model for our youth and is a shining example to all."

I have to admit, I ran across this when searching to try to find a reference to him as a feared hitter, but couldn't find a legit source to post.

Thank you for the article, this is all fantastic. Even the bobblehead looks intimidating.
Reply to tslavinsky
holgado
How did I miss that Bam Bam article the first time around? Hilarious stuff, Sam.
Reply to holgado
Johnston
Okay, I'm convinced.
Reply to Johnston