intransitive verb
1. get dirty, slide hard
2. jump up against the fence

noun
3. whatever it takes to help your team win
4. the only way you're gonna get the best out of yourself

Hustle is absolutely one of my favorite things, though I have a problem with the way it is usually used. For instance, "whatever it takes to help your team win" could refer to:

That's not what hustle usually refers to, of course. We know how Winfield thinks of hustle. I, personally, think hustle is any extra effort that is unlikely to provide a reward in most instances but will provide a reward in some cases—backing up a base every time, for instance, even though only one in 100 balls will actually get through. Running hard on routine grounders. Those sorts of things. But what about the broader population? There are 240 MLB.com highlights from 2012 that have the word "hustle" in the description. For fun, I watched them. Here's what I learned about what qualifies as hustle: 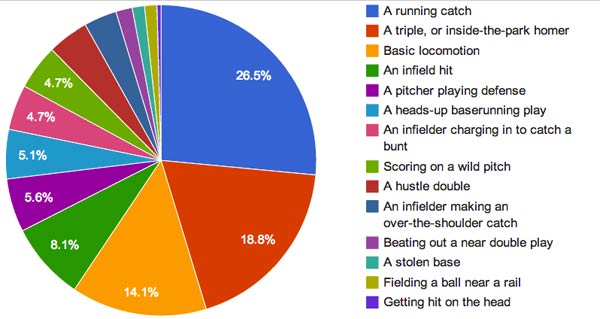 In most cases, "hustle" is used as a synonym for "run". This isn't totally unreasonable; the most common definition of hustle in the world is to hurry, and running is a form of hurrying. But in baseball, and in all sports, hustle is about more than hurry, and I wouldn't consider most forms of running to be hustle. There's a lot of running! It's a sport about running! To quote a real dictionary this time, here's an excerpt from the Dickson Baseball Dictionary, which commits 50 lines of text to its definition:

hustle 1. v. To play aggressively, quickly, and alertly. Henry Chadwick (The Sporting News, March 23, 1895; Peter Morris) complained that "the base ball definition" of "hustling" was "simply to endeavor to win a game either by fair means or foul," such as yelling like "a mad bull on the coaching lines" or "willfully colliding" with opponents or performing "under the generic term of 'dirty ball playing.'" 2. n. Playing baseball in an alert, energetic and aggressive manner.

So all running isn't hustle. It's basic baseballing. All scoring of runs isn't hustle, either. "Altuve Hustles Home" might be adorable but it isn't hustle:

So we've talked about what we're talking about. Onto the GIFs. Presenting the winners of the 2012 Hustlies, culled from the 240 videos:

If Brian Matusz had struck out Franklin Gutierrez, he would have probably walked off the mound, circled it, perhaps grabbed some rosin. The usual strikeout routine pitchers do. Had he done that, he would have taken eight or nine steps. Instead, he let Gutierrez bunt the ball, took two steps, and was done. Can't really rule out the possibility that this was Matusz taking the lazy way out.

Other people who hustled: Manny Machado; Ryan Flaherty; Matt Wieters, who doesn't know it yet but is going to catch 18 innings in this game.
Did not hustle: Franklin Gutierrez; Second-base ump Wally Bell.
Moderate hustle: Adam Jones

Furcal would end up on third.

Other people who hustled: Michael McKenry, who doesn't know it yet but is going to catch 19 innings in this game. (Just a coincidence.) First-base ump Jim Joyce, who gets in position even though the play is automatic.
Did not hustle: Josh Harrison, who could have been the hero if he'd just followed through on the notion he had.
Moderate hustle: Gaby Sanchez, whose first step in pursuit of the ball has a whiff of "Somebody else'll get that right?"

Shortest Hustle Double: Eric Hosmer
Hosmer nubs one down the line and, while everybody is waiting for it to roll foul, just keeps running.

Admire the Orioles' complete disinterest. This is, remember, the second-best-managed team in the AL in 2012.

Other people who hustled: None.
Did not hustle: Mark Reynolds; Robert Andino; Eric Hosmer, who spends the 90 feet from home to first looking over his shoulder; everybody.
Moderate hustle: Home-plate umpire Adrian Johnson; third-base umpire Fieldin Culbreth.

Best Legit Hustle: Yoenis Cespedes
This is my personal favorite type of hustle, because of a childhood experience.

There was a game in the late 1980s in which Eric Davis scored from first base. It might have been this game, which fits the time period and the teams involved and would certainly have heightened the impact of Davis' move, coming as it did on a walk-off play. I associate the memory with my bed—as in, I remember lying in bed and just being so excited that it had happened, and I resolved right then and there that it was going to be my goal to score from first, too. So I started a running program, running up and down my driveway so I could get fast like Eric Davis. At some point that season, I did manage to do it, but that doesn't mean anything because Little Leaguers are terrible and I also probably got a home run on a blooper over the second baseman. Anyway, scoring from first on a single is my benchmark for speed, hustle, and awesomeness. But for a quirk of fate, my benchmark for speed, hustle, and awesomeness could have been scoring from first on an errant pickoff throw, which Davis also did against the Giants that year.

(As it turns out, it's not that rare at all! Since 1985, 355 different players have scored from first base on a single without an error being recorded. Some of these are certainly walkoff situations, where the batter would have no incentive to try take an easy double. For instance, J.T. Snow. Rickey Henderson did it five times after 1985, and Davis actually did it four times.)

The moment Yoenis Cespedes decides to go is so subtle. Casper Wells comes up in position to throw, sees Cespedes isn't going, and relaxes. For just a moment, his back foot is off the ground, and the lower half of his body is no longer aligned toward the plate. That's the extra split second it'll take for him to re-cock, and that's the moment Cespedes chooses.

Other people who hustled: Kyle Seager, who points.

Amazingly, there is also not one highlight for hustle for Mike Trout, the league-wide Heart & Hustle winner in 2012, or for any of the previous league-wide winners who are still active: Torii Hunter, Roy Halladay, and Albert Pujols. Heart & Hustle voters clearly put an overemphasis on Heart.

But you know who does have highlights for hustle? Bryce Harper. Harper has SIX hustle highlights, the most in baseball. (Michael Bourn has four.) As has been shown previously, most of the hustle highlights are nonsense, but Harper's highlights feature real hustle because Harper really does hustle.

Just before this play, Harper had stretched a double in the left-field gap into a triple. He really should have been out, but the relay was terribly handled, so he was safe. So on this play, the announcer say something like "he's gonna come home now and make them make two throws again!" Which might get to the heart of Bryce Harper's particular brand of hustle. Bryce Harper's philosophy is that everybody sucks, and if he just runs they'll probably make some mistake. It makes sense that he thinks that, because he is very young and it was about three months ago that he was playing in a 13/14-year-old league. The "make them make two throws" strategy probably won't hold up for long. These men are very good at making throws! For now it's fun.

Other people who hustled: Third baseman Luis Valbuena, who hustled toward that slow roller but left third base unoccupied so that Harper didn't have to worry about a throw to third base.

In conclusion: Frank Catalanotto has published a book called Heart & Hustle. Bob Costas wrote a blurb for it, sort of.

You need to be logged in to comment. Login or Subscribe
fawcettb
Fun article. Thanks.
Reply to fawcettb
Lindemann
I enjoyed the article, but I disagree on Harper's brand of hustle-ism not working over the long term. For a young player, he seems remarkably good at picking his spots; many newspaper articles this year documented Harper picking the brains of his older teammates about fielders. His single-stretched-to-double off Jason Heyward, for example, took advantage of a well-observed tendency. It's not like he had a bunch of baserunning miscues last year - BP has him at 5.4 BRR, which matches with my closely observed subjective record. He's just slightly less risk-averse than most players, and the record shows so far that his strategy is working out.
Reply to Lindemann
lyricalkiller
Yeah I changed my mind and agree with you. Watching Harper run the bases is one of the best parts of baseball right now.
Reply to lyricalkiller
jdeich
It still baffles me that Bryce Harper probably makes the list of most-booed players. (Someone needs to invent BooFx.) I'm not sure what he'd have to do to be a more fun player to watch, and all the rumors of jerkishness haven't added up to any big controversies. The closest he's come is the "clown question" incident, which I'd defend as an appropriate response to an objectively stupid question, especially given Harper's religious beliefs.

That said, I'd bet if you looked at the individual videos of the events that make up his +5.4 BRR, you'd see an uncharacteristic number of plays that were either large positives (snatching an extra base when he had no business doing so, like the GIF above) or large negatives (TOOTBLANs). It would be interesting to sit down with the Nationals 1B/3B coaches and hear what they think of Harper's style of play.
Reply to jdeich
timber
I don't know why you say that Hosmer didn't hustle on his own hustle play. Sure, he was looking over his shoulder from home to first, but at least he was running and not jogging while he did it.
Reply to timber
lyricalkiller
Head down and run! Always use two hands! Remember how many outs there are! Etc etc

Reply to lyricalkiller
km9000
I make transposing typos like "David Muprhy" all the damn time, so... I feel a little bit better now.
Reply to km9000