The Winter Meetings in Nashville are a week away, and the rumor mill is merely getting warmed up for the action ahead. Here are three of the biggest developments from the Thanksgiving weekend:

Joining Twins could enable Brett Myers to return to rotation
Some teams enter the offseason looking to make minor tweaks or to plug a couple of holes in their rosters. The Twins, as evidenced by the screenshot below from their official website, are not one of those teams. 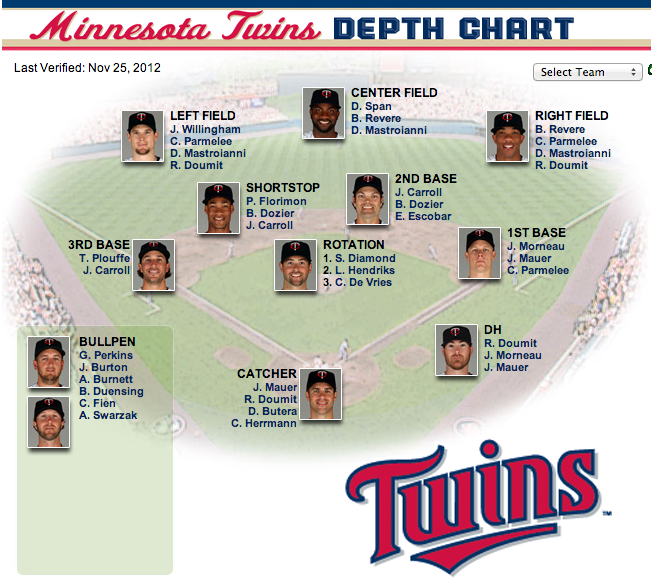 Manager Ron Gardenhire’s rotation currently consists of a number-one starter who struck out less than one batter every two innings during the second half of last season, a number-two starter with five quality starts in 20 major-league tries, and a number-three starter who, before 2012, was an undrafted minor-league veteran endearing mostly because he is a native Minnesotan and a former Golden Gopher. That is a glass-half-empty review of Scott Diamond, Liam Hendriks, and Cole De Vries—and Kyle Gibson, who ranked fifth on Jason Parks’ Top 10 list, should bolster the staff in the near future—but the Twins may have fewer reliable starting pitchers than any other team in the league.

In a chat with John Perrotto published last week, general manager Terry Ryan acknowledged both that improving the rotation is his top priority and that he lacks the financial resources to chase top free agents like Zack Greinke. Ryan noted that his greatest selling points to lower-tier pitchers are Target Field’s generous dimensions and pitching coach Rick Anderson’s track record, which he believes will entice affordable arms to come to Minnesota. The veteran GM is casting a wide net in his search for reinforcements—so wide, in fact, that it includes a pitcher who spent all of last year a reliever.

Myers was the Astros’ closer until mid-July, when Jeff Luhnow sent him to the White Sox, who used the righty as a set-up man for Addison Reed. The 32-year-old showed improved control out of the bullpen, cutting his walk rate from 6.2 percent to a career-best 5.5 percent from 2011 to 2012, but his strikeout mark also declined, down to 15.1 percent, his lowest since 2004. According to a report from Star Tribune beat writer Joe Christensen, Myers’ agent, Craig Landis, is shopping his client as both a starter and a reliever, and Target Field would offer Myers a friendly environment in which to attempt to rediscover his 3.3 WARP form from two years ago.

Always more of a workhorse than an ace, Myers logged 214 innings in 2011 and 223 2/3 frames the previous season, and his durability should also appeal to the pitching-starved Twins. Landis and Ryan told Christensen that talks remain in the exploratory stage, but with Jeremy Guthrie, Hiroki Kuroda, and former Twin Scott Baker already signed, if the interest between Myers and Minnesota is mutual, a deal may well be struck before the parties head to Nashville.

Braves, Phillies in bidding war for B.J. Upton
Center field may be the deepest position in terms of available talent this offseason, and ESPN’s Jim Bowden tweeted on Sunday that the biggest domino could soon fall. At 28, Upton is younger than fellow free agents Michael Bourn, Angel Pagan, and Shane Victorino, and even though he is coming off of a disappointing, 2.1 WARP season, that factor could make him the least-risky investment of the lot. With the National League East rivals each seeking outfield upgrades, Upton’s agent, Larry Reynolds, apparently sees a first-mover advantage and is inclined to set the market rather than sit back and wait for it to unfold.

That’s why, according to Bowden, Reynolds is asking interested teams to submit their final offers by the end of the week, a deadline that could get Upton settled in advance of the Winter Meetings. Per the former Nationals general manager’s tweet, the Braves are slight favorites in the Upton sweepstakes, with the Phillies and an omnipresent “mystery team” also in the mix.

Ken Rosenthal reported a few weeks ago that Phillies general manager Ruben Amaro Jr. was seemingly rolling out the red carpet for Bourn by bringing former Rays scout Bart Braun and former Tampa Bay hitting coach Steve Henderson into the organization. Braves GM Frank Wren, meanwhile, views Upton as a strong complement to his lefty-heavy lineup, and could use the team’s opening window of competition—especially relative to the Phillies’ outlook—if the talks go beyond dollars and years.

Daisuke Matsuzaka wants to join Padres
Free agents don’t often openly pitch themselves to one team, but Matsuzaka—who hopes to resurrect his major-league career after coming back from Tommy John surgery last season—did just that last week, all but begging for a contract from Padres general manager Josh Byrnes. Even with the fences moving in for 2013 and beyond, Petco Park should remain one of the league’s most pitcher-friendly yards, and Bill Center of The San Diego Union-Tribune wrote on Saturday that Matsuzaka has fond memories of it from the World Baseball Classic.

The 32-year-old Matsuzaka served up 11 home runs in 45 2/3 innings last year, and though his 8.28 ERA belied a more-palatable 5.89 FIP, with diminishing stuff and iffy control, the right-hander needs all the ballpark help he can get. Center mentioned that Matsuzaka told Japanese reporters that “money is not the biggest issue,” and after raking in $52 million over six years with the Red Sox, he may be forced to accept an incentive-laden deal and compete for a job this spring. If Byrnes opts to pursue other options, agent Scott Boras could also pitch Matsuzaka to a desperate team like the Twins, and he told the Providence Journal’s Brian MacPherson earlier this month that he expects a low price tag on “an arm with potential” to drum up interest from budget-conscious GMs.

You need to be logged in to comment. Login or Subscribe
fatted
Who is the mystery 3rd team in on the Upton free agency?
Reply to fatted
statsrath
Thanks for reading, fatted. We don't have many indications as to who the third team might be, but the Nationals, Rangers, and Reds are among those that have previously been tied to him this fall.
Reply to statsrath
Bob1475
If we knew it would not be a mystery
Reply to Bob1475
ofMontreal
Dice-K should be considering Seattle, regardless of new dimensions. I'm liking the new rumor column Daniel, it's good work.
Reply to ofMontreal
statsrath
Thanks for reading, ofMontreal â€”Â and, I agree with you, Seattle is another potential fit for Matsuzaka.
Reply to statsrath
jfranco77
Dice-K to Minnesota makes some sense, doesn't it? If he really wants to pitch, and doesn't just want to pitch somewhere with nice weather? Target Field is a nice place to pitch, and it's clear the Twins need pitching.
Reply to jfranco77
statsrath
Yep, as I wrote, Minnesota seems like a logical backup plan.
Reply to statsrath