You’d think that, if you managed a player who was almost totally unable to get a base hit, you might consider telling him not to swing. Pitchers, most pitchers, are almost totally unable to get base hits. You might tell your terrible-hitting pitchers not to swing unless they're behind 0-2 or 1-2. "If you can't stop yourself from swinging," you might suggest to these pitchers, "think about something totally unrelated to baseball as a distraction. Think about sex, to distract yourself from the baseball you're having."

Earlier this season, Ian Kennedy starred in a factoid on this site when he was outwalking Albert Pujols. Ian Kennedy seems to have figured out on his own that he should not swing. He walked 11 times this year, in 73 plate appearances, which would be the second-highest walk rate in baseball if he had enough plate appearances to qualify. He’s a terrible hitter, but he’s an excellent statue. Only three players (Lou Marson, Daric Barton, and the pitcher Christian Friedrich) swung at fewer pitches outside the strike zone, and no player swung at fewer pitches inside the strike zone, and of course no player swung at fewer pitches in aggregate. Ian Kennedy drew three four-pitch walks. Never forget this: pitchers don't actually have much control, and Kennedy's experience suggests a man without a bat can walk at least 10 percent of the time. 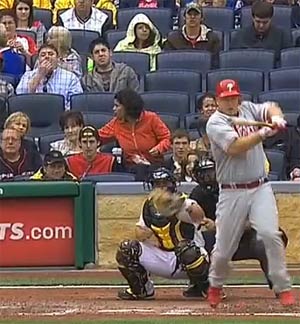 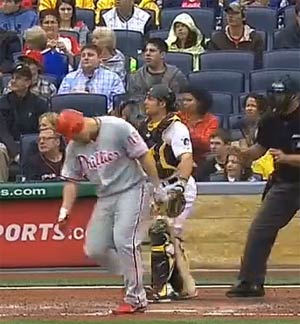 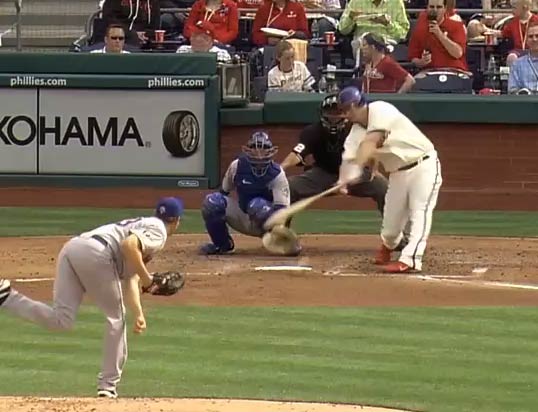 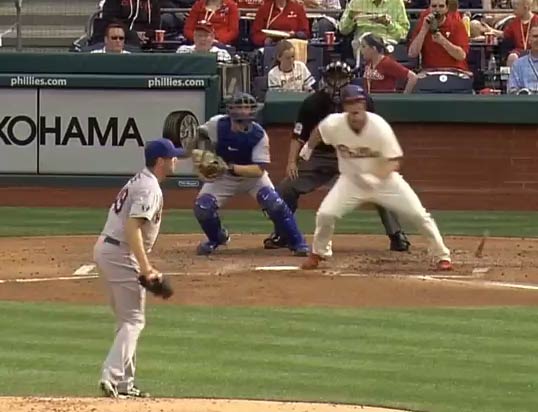 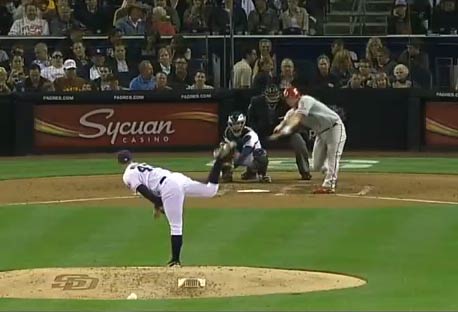 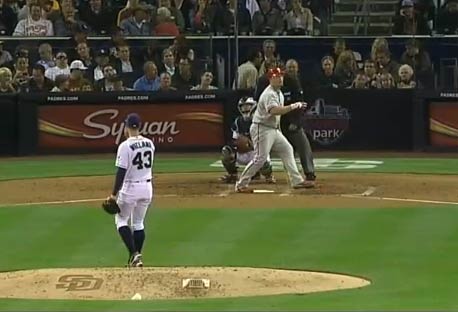 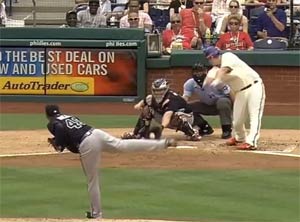 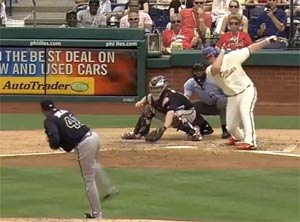 Over the past couple days, I watched the bulk of Worley’s plate appearances this season, and one thing comes up over and over again: Worley is, the announcers swear, a good hitter. The context of this claim was that Worley had begun the year with an 0-for-21 stretch, before a two-hit game in Colorado. Before that Colorado game,

Tom McCarthy: This man at the plate is absolutely positively piping-hot due.
Gary Matthews: He’s a better hitter than that. Much better hitter.

After the Colorado game,

F.P. Santangelo: He is a pretty decent hitter. And he’ll take a hack, a big hack.

I like the suggestion there, that what separates a good-hitting pitcher from a bad-hitting pitcher is the ability to take a big hack. There's perhaps some truth to that; a big hack can occasionally land and cause the ball to travel. A big hack at least puts that possibility in the opposing pitcher's head. Worley will take a big hack, and if you’re just watching him swing at a strike and comparing him to other pitchers when they swing at strikes, you would guess that he could hit a little bit. He hit .222/.239/.244 in 2011, behind a .323 BABIP. But he hit .081/.081/.108 in 2012, behind a .125 BABIP. Maybe he can hit a bit, but more likely he’s about as good as the average pitcher, and he’s going to bat around .130 and slug about .170, just like the average pitcher, and just like Kennedy has in his career.

In fact, strip away the walks and Kennedy and Worley are pretty much the same amount of awful, in the 100-PA samples that make up their careers:

Yet Kennedy was the 29th-best hitting pitcher in 2012, by True Average, while Worley was 81st-best (out of 92, minimum 20 plate appearances). Look, this isn't the biggest deal in the world. I'm not suggesting that baseball completely change its expectations for pitchers as batters; it would take loads more analysis to figure out the actual implications, for a gain of maybe a couple runs a year. This piece isn't that piece; this piece is just about two interesting things about two players. But there's at least an internal logic to what Ian Kennedy does, and a counterproductive sound and fury to what Worley does. What we see are two different approaches to the ninth spot in the order, and one seems to be better for scoring runs and the other seems to be better for making GIFs.

Thanks to Dan Turkenkopf for research assistance.

You need to be logged in to comment. Login or Subscribe
jonkk1
Thanks for the amusing if not interesting article, Sam. Maybe "BMG" (better for making GIFs)can become a new category.
Reply to jonkk1
marctacoma
As with all of Sam's articles, I enjoyed this despite the fact that if you just told me what it was about and didn't tell me who wrote it, I'd never have clicked through.

"Hey, would you like to read about a pitcher who hacks at everything and generally looks awful at hitting?"

"Would you be interested in some fake Giancarlo Stanton trade ideas?"

"Here's a piece titled 'Are GMs Smart or Not Smart?'"