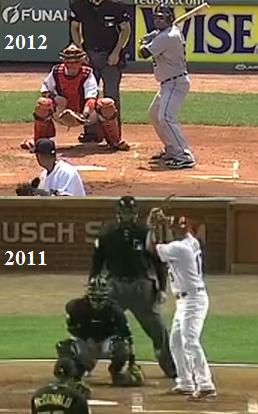 Laird altered his batting stance last season. He lowered his hands, from head-level to shoulder-level, closed his feet, and added more bend to his lower half. The changes resulted in a more compact swing, which prompted a career-best contact rate. Laird also experienced a lower rate of fly balls and pop-ups. The sample sizes over the past two seasons are small in both instances, but look for Laird to retain some of his newfound contact abilities since the mechanical changes jibe with the statistical blips.

The Braves could start Laird to open the season if Brian McCann is unavailable. It’s unclear who the Braves would turn to as a backup in such a scenario. Top prospect Christian Bethancourt’s defense is big-league ready, but his plate approach needs refining. Depending on the Braves’ optimism, they could elect to add another vet type on a minor-league deal. Just in case McCann misses more time than anticipated.

The market for backup catchers is moving at a brisk pace, following in the footsteps of last winter, when we saw a slew of activity heading into December. Don’t be surprised if a few more veteran backstops come off the board before the end of the month.

Navarro netting $1.75 million registers as a surprise. Prior to a 24-game cameo for the Reds last season, his most recent positive contribution came in 2008. Navarro made the All-Star team that season while inching toward validating his former top-prospect status. Instead, Navarro headed in the wrong direction. As if back-to-back miserable seasons weren’t enough, he shot himself in the foot by abandoning the Rays after his exclusion from the postseason roster. The Dodgers gave Navarro a shot in 2011 but released him in August amid concerns about his work ethic.

Players with .215/.270/.323 lines over the past four seasons can seldom afford to be selfish and retain gigs. Yet Navarro has done just that. It’s not like he makes up for his offensive flaws on defense, either. His career caught-stealing rate is a smidge above average, and while he will pull off a smooth move now and again—he loves snap throws behind runners on the corners—his lazy action on balls in the dirt cancels out the goodness. The public framing studies indicate Navarro is average at best.

Ostensibly, Navarro will serve as the backup to Welington Castillo. To Navarro’s credit, he does appear to be a superior option to in-house alternatives Steve Clevenger and J.C.  Boscan. Perhaps the Cubs are hoping that Navarro, 29 come opening day, can build upon last season and put together a better-than-anticipated season. Swallowing close to $2 million because a backup catcher had his usual season is tough. But it’s not like the Cubs are aching for dollars, and it’s not like the club had more intriguing options on hand.

You need to be logged in to comment. Login or Subscribe
edman8585
I noticed that Laird was one of the worst framers in the studies released last offseason. Anecdotally, he was pretty bad this year.
Reply to edman8585
Oleoay
Um.. why spend $2 million on a backup catcher.. is he really that much superior to Clevenger to the point he's worth ($2 million minus league minimum) more.

Now, if the Cubs plan is to give Navarro about 40 games by the trading deadline then flip him for a B-level prospect, it makes sense... but if it's to try to change a 65 win team to a 65.1 win team, it doesn't.
Reply to Oleoay
onegameref
Price seems pretty steep for Navarro. I agree with the Clevenger statement too. There would seem to be better ways to spend their $.
Reply to onegameref
BillJohnson
There's a third backup-catcher signing as well: the fairly forgettable Rob Johnson signed a minor-league contract, with NRI, with St. Louis. Presumably he'll be one of the zillions of catchers showing up to early spring training, and then mentor the young guns at Memphis while waiting for Yadier Molina or Tony Cruz to get hurt (perish the thought).
Reply to BillJohnson