Manny Ramirez made his Dominican winter league debut last night for Las Aguilas Cibaenas. Wearing no. 99, he matched up against Daniel Cabrera, also wearing no. 99. Via Vin Scully is My Homeboy, here's the first pitch Manny saw:

The pitch was a fastball up above the belt. 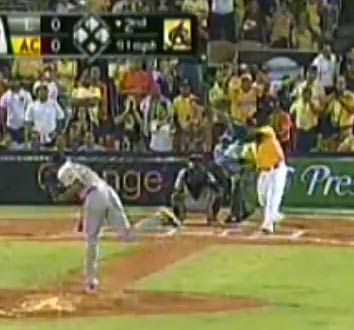 Cabrera used to throw in the high-90s, so that might seem like an amazing job of catching up by Manny Ramirez. But last we saw Cabrera he was averaging 91 with his fastball, and that was more than three years ago. His velocity could have gone in either direction since then.

Check out that crowd! Listen to them roar. And they say baseball isn't popular in the Dominican Republic. Nobody says that? Oh.

Miguel Tejada played second base and went 0-for-4.

Also, watching a Dominican baseball game is now on the bucket list.
Reply to SaxonB
crperry13
" He has struck out 11 and walked 10"