It makes some sense that after a season in which they were burned by an injury stack to their starters, the Blue Jays would trade for a pitcher whose most serious injury through 12-plus seasons is a minor flesh wound inflicted by a mayonnaise jar. Meet Mark Buehrle's injury history (click to expand):

Buehrle has made 396 straight starts without missing one due to injury. Even when he's day-to-day, he doesn't miss a day. It's true that soft-tossers are generally less susceptible to injury, and Buehrle is among the softest of tossers. But not throwing hard is no guarantee of immunity from muscle strains or arm injuries, let alone a wayward line drive. This, for instance, is the injury history of Shaun Marcum, one of the few pitchers who throws slower than Buehrle:

And this is the injury history of Chris Young, who throws even slower than that: 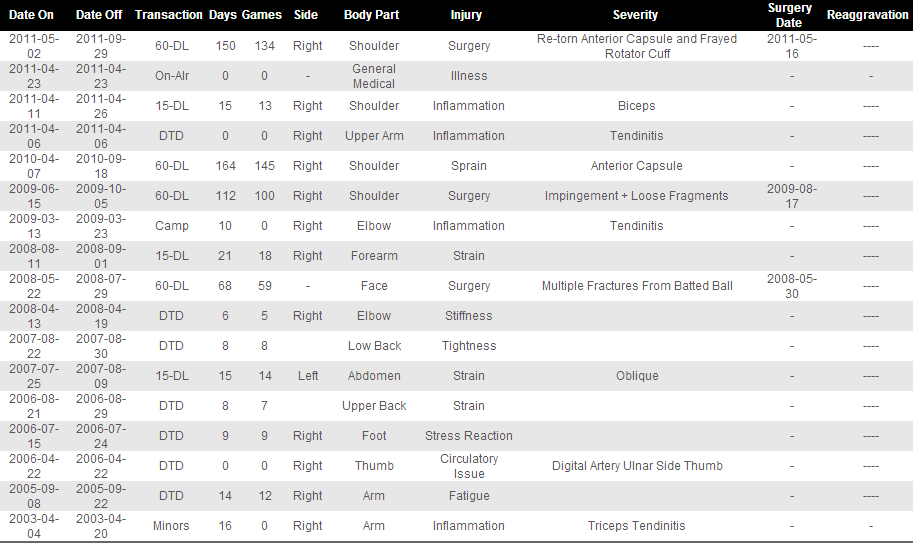 Cal Ripken Jr. played 15 full seasons without missing a game. If Buehrle plays out the rest of his contract—which runs through 2015—without getting hurt, he'll have pitched 15 full seasons without missing a start due to injury. Granted, a position player plays in many more games than a pitcher over the same span of time, but a pitcher has a much higher risk of injury in each of his appearances. So, serious question: Which feat would impress you more?

You need to be logged in to comment. Login or Subscribe
Worthing
Interesting. I think the pitching would impress me more.
Reply to Worthing
KerryHofmeister
A tip of the cap in your direction Mr. Lindbergh. Good find.
Reply to KerryHofmeister