Saturday, November 3
The morning begins with a meeting of the SABR Flame Delhi Chapter. Chapter president and AFL Conference coordinator Rodney Johnson offers a few introductory words before turning things over to Bernie Pleskoff, who tells us what to expect in tonight's Rising Stars Game and generously answers our questions about players we may have seen (including mine about Rangers shortstop Luis Sardinas, who will not be playing but who impressed me on Friday).

Johnson then talks about his role as official scorer for the Arizona Diamondbacks and explains the name of Arizona's SABR chapter. Lee William “Flame” Delhi was a right-handed pitcher who appeared in one game for the Chicago White Sox in 1912. He also enjoyed a distinguished minor-league career, winning more than 20 games in three of his seven seasons before retiring in 1915 at age 22.

What does all of this have to do with anything? Well, Delhi was the first player in major-league history to be born in Arizona (which was then still a territory). Johnson has written a fantastic biography of Delhi for SABR, and it's well worth reading.

After we go our separate ways for lunch, the group reconvenes for the shuttle ride to Salt River Fields at Talking Stick and an evening of baseball. The Rising Stars Game draws an extraordinary amount of attention relative to other AFL games, as well it should. The game pits top prospects from every organization against one another in a showcase attended by dozens of scouts and watched by fans everywhere on TV.

Reds center fielder Billy Hamilton leads off for the West Division team by walking after working a 3-2 count. Pleskoff earlier identified the 22-year-old as the fastest player in the league, and it doesn't take long to see why. Hamilton gets a bad jump, Yankees catcher Austin Romine (age 23) throws a strike to second, and it still isn't close. Hamilton then steals third on a return throw from Romine to the pitcher. If you blink, you miss it. Romine blinked.

In his next trip to the plate, Hamilton strikes out looking at a 1-2 curveball. It's a seven-pitch at-bat mainly consisting of weak foul balls, which brings up a point Pleskoff made this morning: Hamilton has work to do from the left side of the plate. 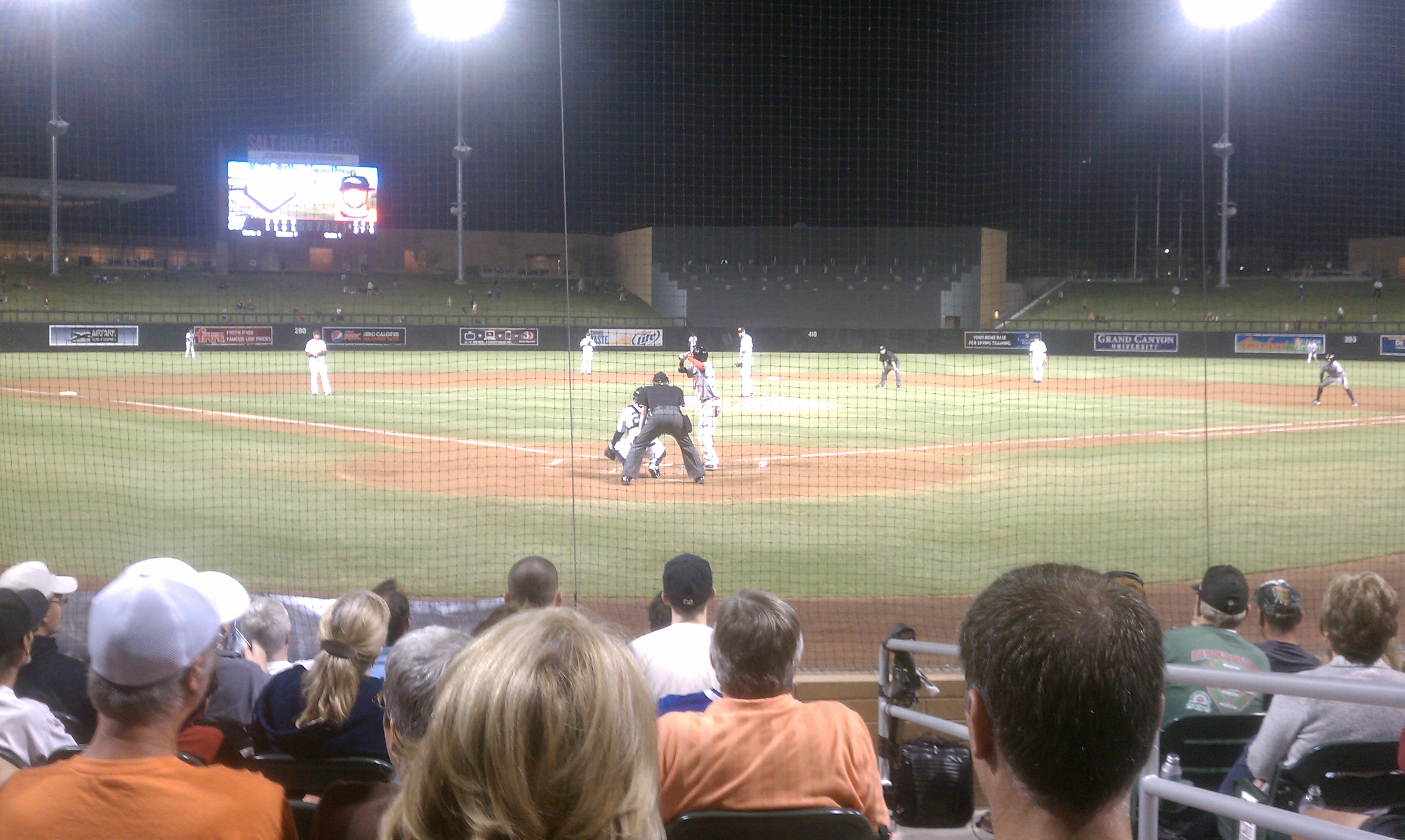 Reds center fielder Billy Hamilton at the plate. Note where the infielders are positioned.

The thing about Hamilton is that, until you see him, everything sounds like an urban legend. And it isn't just the speed. Make no mistake—he is crazy fast. But beyond that, he is in perpetual attack mode. He is always watching the pitcher and defense, looking for opportunities and weaknesses to exploit.

In the fifth, Hamilton drops a bunt. Astros first baseman Jonathan Singleton (age 21) fields the ball and launches it into right field, allowing Hamilton to reach third. Depending on which expert you believe on Twitter, his time from home to first is between 3.38 and 3.50 seconds. The guy sitting next to me has him at 3.50. We have no words for this, but just kind of giggle like schoolgirls.

Watching Hamilton glide around second is a treat. Again, it is difficult to speak of his feats without sounding like an idiot. The man does things that most people physically cannot do. A day later, he inspires the following Twitter conversation

@ducksnorts Yep. Throwback. Early 80s player. Probably going to hit .290 steal 90+ bases, hit a ton of 3B and run corner to corner in the OF

@ducksnorts Catalytic player. He will change the style of game Cincinnati plays. He's a star if the hit tool is legit.

I'm still searching my own memory banks for comps. Kenny Lofton? Willie Wilson? Vince Coleman? Heck, Coleman once stole 107 bases with a 581 OPS. I would bet Hamilton could do that right now. Still, there is no need to rush the kid. We want to see more of him because he is such an exciting player, but it can wait.

Hamilton pops to third and draws another walk in his final two plate appearances. He also makes a sensational diving catch on a ball hit over his head to left-center off the bat of Nationals outfielder Brian Goodwin (who turned 22 a day earlier). It's an impressive play for someone who had spent none of his 379 professional games in the outfield before being converted in the AFL. And actually, it's impressive for anyone.

Rays shortstop Hak-Ju Lee (two days younger than Goodwin) follows Hamilton and has a rough time at the plate. As you can see from my notes, his “long swing” results in two strikeouts, although he manages to ground a single back up the middle in his final at-bat. 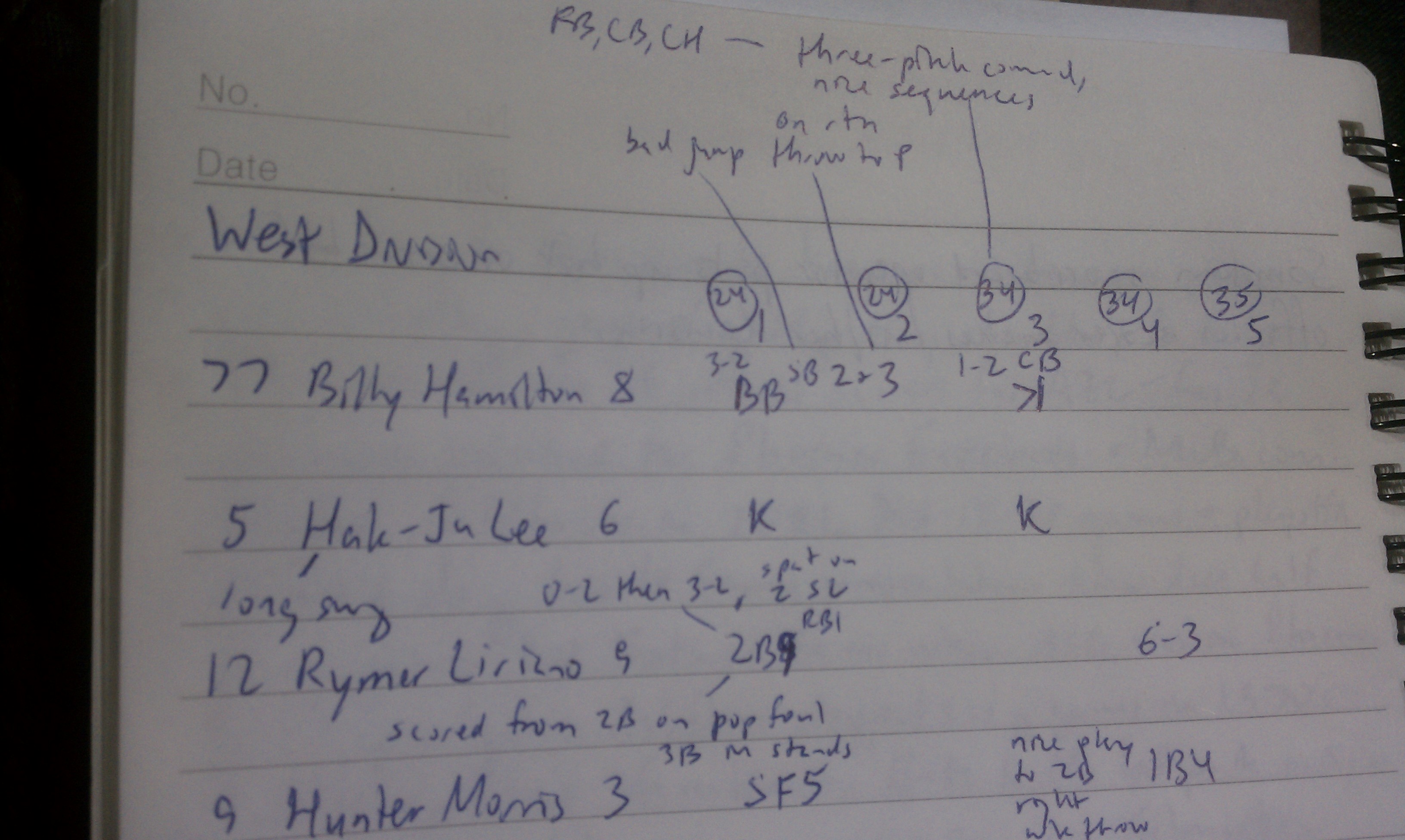 My notebook, before things got ugly

Padres right fielder Rymer Liriano (age 21) puts on one of the evening's more impressive displays, going 3-for-4 with two doubles and a walk. Both doubles are to the opposite field, with the first being driven hard to right-center and the second being a bloop down the right-field line on a pitch that gets in on his hands.

The hits are nice, but what gets my attention is Liriano's approach in the first at-bat. After falling behind, 0-2, to 22-year-old Astros right-hander Jarred Cosart, he fouls a pitch back. Then he takes a pitch way outside and another that just misses low. After another foul ball, he takes a pitch just off the plate, then whacks a pitch up in the zone for the RBI double. The fifth and seventh pitches of the sequence are tempting, but Liriano lays off them. Not everyone would do that, including possibly Liriano himself earlier in the year.

Marlins outfielder Christian Yelich enters the game in the fifth. He grounds out to second and singles through the 5.5 hole in two at-bats. Pleskoff identified him as the best player in the AFL this year, but he sees only four pitches tonight and takes two of them, so I have no idea.

On the East Division side, the lefty-swinging Goodwin has a terrific night. He homers to right to lead off the bottom of the first, is robbed of extra bases by Hamilton in the fourth, and knocks a double to right-center against Rays lefty C.J. Riefenhauser (age 22) in the fifth.

Singleton, as he did on Thursday, continues to impress. In the third, he grounds a full-count pitch just to the right of the shortstop. As with Liriano, what catches my eye is a pitch he lets go. In this case, it's a 2-2 fastball outside from Mariners southpaw James Paxton, who turns 24 a few days after this contest. It isn't an easy one to let pass, but it also isn't the one Singleton wants.

His next time up, Singleton again works the count full before drawing a walk against Mets left-hander Chase Huchingson (age 23). What I love about this sequence is the 2-0 pitch. With his team up, 3-2, and a runner on first with two out, Singleton takes a vicious hack. He gets only air, but the thought process is solid. And this comes an inning after he has taken another lefty the other way when the situation dictated that he do so.

@ducksnorts I love his hips. When he explodes into a ball, his hips just sing. He's going to hit for power.

@ducksnorts Big steps forward against LHP this fall. He's a mature hitter. I like the work he has put in. He really wants it.

The other guy who catches my eye is Tigers third baseman Nick Castellanos. Just 20 years old, he is starting at DH tonight. He singles in each of his first two at-bats, then grounds out to third twice and flies out to right. It isn't a spectacular showing, but he takes good swings and hits the ball hard.

When I saw him on Thursday, he played left field and drew a couple of walks, neither of which left an impression. Pleskoff noted that he doesn't wear batting gloves. Pleskoff also praised Castellanos' athleticism and, in discussing his relatively lackluster AFL performance, reminded us that Buster Posey and Mike Trout didn't do much here either. It's a long season; guys get tired.

I also get a glimpse at Nationals third baseman Anthony Rendon. The 22-year-old is another late-inning replacement and flies out to left field in his only at-bat. However, he makes a terrific play on a short hop off the bat of Mariners catcher Mike Zunino (age 21) in the ninth, coming up with the ball cleanly and firing a strike to second for a force on Hamilton (!). It's an athletic play.

Eventually the game draws to a close, with the East Division team prevailing, and we file back into the shuttle that returns us to our hotel. We thank Rodney, our gracious host. We say goodbye to folks we have met or reacquainted ourselves with over the past few days, maybe exchange phone numbers and email addresses, and prepare to get back to our lives.

The baseball and camaraderie in Scottsdale have been enjoyable, a way to delay the inevitable close of a long season and share in the game's delights with those who just can't get enough of it. As I drive through Gila Bend, Yuma, and El Centro on my way back to San Diego, I find myself already making plans for next year's conference, which, as Rodney reminds us at Saturday morning's meeting, is really just an excuse for friends to get together and watch baseball.

Hey, that works for me.

You need to be logged in to comment. Login or Subscribe
carligula
Any idea why Hamilton wears #77?
Reply to carligula
beeker99
Really enjoyed this two-parter, Geoff. Thanks for giving us the inside scoop!
Reply to beeker99
gyoung858
Thanks, Shaun! I had a blast out there; hopefully you can join us next year.
Reply to gyoung858