Do you like sausages? Here's a look inside the sausage. I wanted to start this article by saying, "Boy, general managers sure don't move around from team to team the way players and field managers do!" I proceeded to make a list of all the current GMs who had previously held the top job with a different franchise. That list:

Oops. That's a third of all the GMs in baseball. (Jerry Dipoto is a "sorta" because he was interim GM in Arizona between two others on the list, Josh Byrnes and Kevin Towers, but he never had that tag removed and Towers was hired to replace Byrnes (or really Dipoto in a way) after just a few months.)

So fine, I won't frame this article as "Hey, GMs don't move very often, so when they do, we ought to learn something!" Instead, I'll frame it like this: word hit the interzone yesterday that the Diamondbacks are willing to listen to trade offers for young starting pitcher hopeful Trevor Bauer:

Then again, Diamondbacks beat writer Nick Piecoro talked to Towers and tweeted this:

Towers made a foul face when asked about the Trevor Bauer rumors. Said they're not shopping him either, would like to keep his young arms.

Let's put aside for a second why Towers is so concerned with both of Bauer's young arms when it's really only the right one that matters (that's a grammar joke, see) and note that Bauer is the third player, at least, that owner Ken Kendrick has slagged off this season. Things this makes me wonder:

Herewith are some answers to question no. 3:

Towers worked with Bill Gayton as his scouting director in San Diego (a position Towers himself used to hold) for the last nine years of his tenure there (which lasted 15 years overall) but has spent the last two seasons with Ray Montgomery in Arizona. I'm not sure if this is the real Bill Gayton, by the way, but I thought I'd point it out.

Anyway, has the way that Towers's team draft changed? There are a million ways to look at this, including high-level inquiries like the educational provenance of the talent (more high school? More college?), breakdowns by position of the draftees, or rough measures of success (pick your above-replacement metric and compare to the average for that pick, for example, or compare how many players made the big leagues compared, again, to the average for that pick). Digging deeper, one might identify strategy differences with regard to saving money at the top end and spending it on amateurs of dubious signability later on (a tactic that has had its impact reduced by the new draft rules) or identify trends in the scouting reports like an emphasis on up-the-middle defense or power or fastball command. Given the various time commitments involved in any of these inquiries and the fact that I'm trying to do an overview of how Kevin Towers's life has changed by moving east to beautiful Phoenix, I'm just going to pick one of these measures:

What you're seeing are columns for the number of high-school draftees alongside the number of junior college and four-year college players. There's also a percentage of high-school players and two columns with "1-3" appended: that's how the picks through the third round broke down. (No junior college players were drafted by Towers' teams in the first three rounds in the covered period.) If you prefer a picture of the high-school percentage, here you are, for just the Padres years: 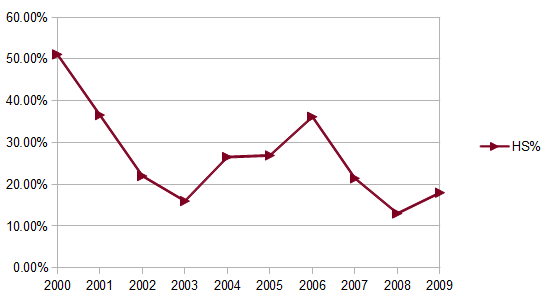 As you can see from the table above, the Diamondbacks years fit comfortably into the 2004-2006 San Diego period, or at least more comfortably than they do the seasons surrounding them. Whether Towers's switch to Arizona and affiliation with Ray Montgomery actually changed how he views high school and college talent depends both on facts I have not placed in the record and on narrative considerations of endpoints. As to the former, I leave as an exercise for the reader the question of how the high school/college/JC split ran in each given year for the entire league. As to the latter, picture in your head the above chart if it started at 2002 rather than 2000. What I see is a shift from a story of an overall decline in drafting high school players to a story of high-school drafting by Towers' crew staying the same for eight years, more or less, with 2006 being a weird year because the team just couldn't pass on Chance Deason and "Hit Man" Jett Hart.

I do have an itch to mention draft results for Towers, but it is of course much much too early to be discussing such an issue with respect to his Arizona tenure, and without data from his current team with which to compare the San Diego information, there's no point even talking about his Padres successes and failures. (Except Matt Bush. We should always talk about Matt Bush being drafted ahead of Justin Verlander.)

The most obvious change for Towers is in the run environment he's dealing with. One of the things I like about our player cards is the personalized park factors listed thereon. Click on Chase Headley, for instance, and scroll to the "Advanced" box. See BPF? That's Batter Park Factor, which the glossary tells you that it's the park factor for the mix of parks in which the batter appeared. ("PPF" appears on pitcher player cards. Guess what it stands for.) Granted that the home field has the most effect on the park factor a player deals with, the vagaries of being a part-time player or an every-five-days starter mean that even teammates could face a different park situation. You wouldn't want to just assume that some Padres pitcher had an easy time of it without looking to see if he got unlucky enough to pitch a slew of innings in Colorado and Arizona, right?

Anyway, using BPF and some full-time players for each team, we can see that the run environment Towers is working in has changed radically. The aforementioned Headley had a BPF of 93 this year, while Aaron Hill, who played basically every day for the Diamondbacks, registered a BPF of 103. (As you know, park factors are expressed as a percentage of average — the run environment for the Padres was about 7 percent below the league average and for the Diamondbacks was about 3 percent above. That's not a swing to laugh off.)

The question is whether this swing has changed the way that Towers constructs his teams:

What you see there is again far from perfect. The most obvious problem is that much of Towers's team in Arizona was already set when he came in, leaving Towers little opportunity to shape the roster even to his liking. Still, note that by FanGraphs's FIP- (like a "plus" stat, this adjusts for park and compares to league average in a similar fashion as the park factor does above), Towers has consistently put together mediocre-to-bad pitching staves that have been saved only by the cavernous confines of Petco Park and good defense. (Taking a naive average of those PADE marks above (i.e. pretending that the number of balls in play is the same every year) and looking at the estimates I made here, the mean Padres team was saving 15 runs better than average each year by catching the baseball.) The pitching in Arizona, meanwhile, has been good and the defense mediocre. (Towers's actual moves in the player-contract market have been a mixed bag as far as defense goes — Jason Kubel's next Gold Glove will be the one he steals from a Bond villain in the 2016 film Quantum of Kubel (Kubel Royale?), but Cliff Pennington, dominator extraordinaire, brings leather and a cannon and little else to the shortstop position.)

I'm not sure, by the way, what it says that Towers has typically put together above-average defensive teams with below-average baserunning ones. That he builds his defenses with players who have defensive chops rather than pure athletic speed? That the coaches he hires are good at defensive positioning but bad at imparting the proper level of aggressiveness and awareness on the bases? Here's another reader exercise: are PADE (or raw defensive efficiency, if you don't like our park adjustments for whatever reason) and BRR closely correlated?

My payment to you for completing that assignment is this: in the right light, and at the right angle, Towers still kind of looks a little bit like Matt LeBlanc.

Right? Maybe? Okay back to baseball. Which Towers team, the Padres of 2000-2009 or the Diamondbacks of 2011-2012, do you think has a higher budget? Here's what I did. I went to our remarkably good compensation pages and grabbed the dollars spent (truncated to the millions place) for the Padres and the Diamondbacks. I also took the total dollars spent in the league that season and divided that by 30. Then I divided the Padres' spending by that figure. The baseline I'm comparing the Padres' spending to, then, is a mythical league where every team spends the same amount of money. It's like the NFL without head injuries.

Here's a picture (of payroll, not head injuries): 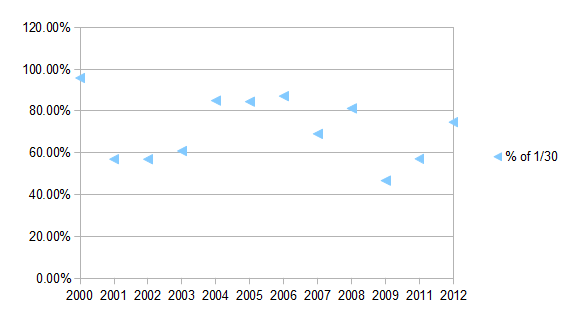 Those Diamondbacks seasons stand right in line with typical Padres spending, don't they? Want averages? For the 2000-09 Padres, the team's payroll was 72.44 percent of 1/30 of the league's payroll. For the 2011-12 Diamondbacks, that figure was 65.92 percent. Believe me, I'm as surprised as you are. The Padres spent like a midmarket team and so do the Diamondbacks.

I have, at best, scratched the surface here, but I think there's a book's worth of material in the question of how a general manager changes (or doesn't) for his environment when he switches jobs. I leave you, then, with the table of contents of said book that you should google to find out more about.

You need to be logged in to comment. Login or Subscribe
doctawojo
R.J. pointed out to me that this Q&A with Towers ran a few years ago right here on BP and includes some in-depth talk about the Padres' approach to the draft.
Reply to doctawojo
frankopy
a foreward by bud is a step backward
Reply to frankopy
bryantwebster
Like with Montgomery in Arizona, the "Towers-led" drafts during most of the PETCO Park era in San Diego received a ton of input/direction from Alderson & DePodesta.
Reply to bryantwebster
doctawojo
Excellent point.

I forgot to do it, but I actually meant to go into a little sidebar about the difficulty of evaluating who is responsible for a draft and where to place blame, especially as to the question of, say, first-round picks vs. 40th.

This is particularly true in this era of complicated management structures like the Padres had for a time with Alderson on top of Towers (or like what we see now at both Chicago teams, the ever-present questions about who is in charge in Boston, etc. etc.). In theory, we should be able to say "whoever actually made the 32nd round pick, the buck stops with the GM and he sets the organizational priorities and philosophies," but these days, it's not even clear that that is true.
Reply to doctawojo