Have you ever had déjà, déjà, déjà, déjà vu? Because it sorta seems as if I've written this recap before. The Tigers’ latest 2-0 loss came against a new starter in a new setting, but the outcome was SSDD—same score, different day—for Detroit. The Tigers, who were shut out just two times during the regular season, have now been shut out two times in their past two games, becoming the first team to fail to score in consecutive World Series games since the 1966 Dodgers (and the first AL team to do it since the 1919 White Sox, who didn’t want to win).

Game Three was the seventh straight start in which Ryan Vogelsong has allowed no more than one run, but it may have been the worst of the bunch. As Daniel Rathman predicted in his preview, Vogelsong stuck with the approach that has served him so well, pounding righties inside and lefties away with two-seamers (the blue squares in the plot):

However, his control wasn’t as sharp as it had been in the NLCS; he had a hard time putting his curveball close enough to the plate to make it enticing, getting only one chase on the seven he threw outside the zone. He walked four and struck out three. When you allow nine baserunners in 5 2/3 innings and set your opponent down in order only once, you have to work your way out of jams to be successful, and that’s just what Vogelsong did. As Leyland said after the game, “I thought we had Ryan on the ropes a couple times tonight. We couldn’t get the killer hit or the killer blow.”

Vogelsong’s biggest tests came in the first, the third, and the fifth. In the first, he walked Quintin Berry and allowed a single to Miguel Cabrera with one out, but he got Prince Fielder to ground into a double play on a 2-1 changeup, with an assist from Marco Scutaro—who did well to get the throw off over Cabrera’s takeout slide—and Brandon Belt, who made a nice scoop on the receiving end. In the third, he gave up back-to-back one-out singles to Omar Infante and Austin Jackson but doubled up the speedy Berry on a grounder to second off a first-pitch changeup. It was the first start all season in which Vogelsong had induced two double plays; he hadn’t earned even one in his previous four starts.

In the fifth, Vogelsong got more help from his defense, as Pablo Sandoval stole a leadoff double from Jhonny Peralta. After that, he allowed consecutive singles to Alex Avila and Omar Infante before loading the bases with a walk to Austin Jackson. But he escaped that situation unscathed, too, fanning Berry—who had the changeup from the previous at-bat “in the back of his mind a little bit,” according to Leyland—on a four-seamer away and getting Cabrera to pop out on an 0-1 four-seamer inside.

Prince Fielder led off the sixth with a hard line drive, but it went right to Hunter Pence. Vogelsong knew how close his line came to looking a lot worse than it did: after the game, he said, “The balls they hit were at people. We played great defense again like we have been all series and all through the postseason.” Tim Lincecum followed with 2 1/3 nearly perfect innings to get the game to Romo,* though he had some help himself:

*The Tigers have missed more than half of the Lincecum pitches they’ve offered at in this series. Bruce Bochy, by the way, reiterated after the game that Lincecum will return to the rotation in 2013.

Vogelsong's counterpart, Anibal Sanchez, allowed two fewer baserunners despite facing four more batters, going seven strong with eight strikeouts and only one walk. Three of those runners reached base in the third, the only frame in which the Giants managed to touch him. In his preview, Dan wrote about how important it is for Sanchez to keep his changeup down to lefties: when he did that on May 3rd, he beat San Francisco, but when he elevated it and wasted it outside on May 24th, they returned the favor. In every inning but the second last night, he consistently kept it down: 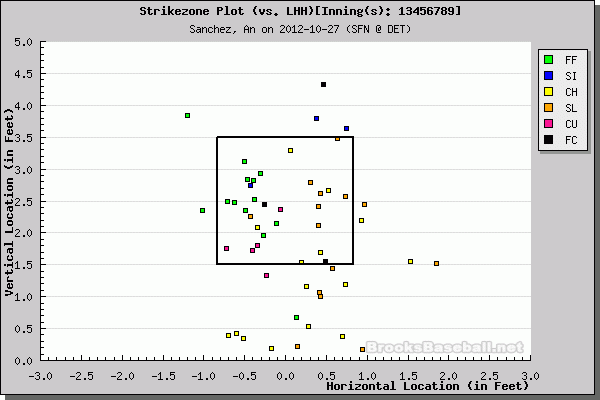 But in the second, he kept leaving it up and away: 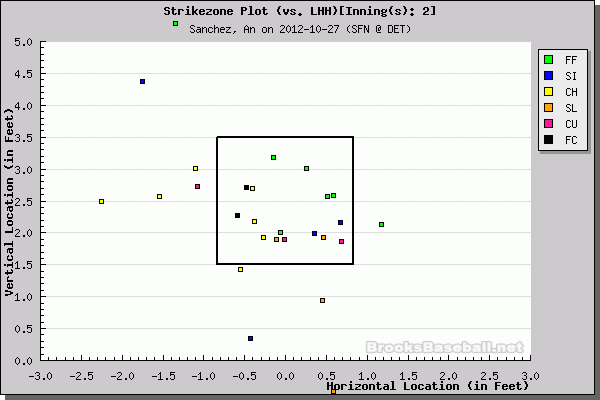 The changeup wasn’t the only pitch that Sanchez lost his feel for that inning. It was clear right away that the right-hander was struggling with his control, as he walked leadoff man Hunter Pence on four pitches (including a 2-0 slider, a strange selection with the bases empty). Pence stole second on a strikeout of Brandon Belt, and a wild pitch advanced him to third. That pitch would have been catchable had Avila been setting up somewhere else, but he was anticipating a sinker low and inside, and instead he got one high and outside.

The big blows came on a 3-2 slider that Melky substitute Gregor Blanco drove to deep right-center for a triple and a two-out, 1-1 fastball that Brandon Crawford lined into center for a single just in front of Austin Jackson. Leyland went so far as to get Rick Porcello up in the pen, but after that, it was smooth sailing for Sanchez. However, the damage had already been done, and Detroit’s bats couldn’t do any of their own.

The Tigers have hit .165 with a .467 OPS in this series. The Yankees hit .157 with a .488 OPS in their four-game ALCS. As Delmon Young put it after the game, “New York looked like us right now.” When the Yankees went a few games without hitting, of course, it wasn’t just small sample size plus good postseason pitching. It was a flawed offense finally being exposed, and Alex Rodriguez infecting his teammates with his toxic unclutchitude. Now that the Tigers are suffering the same fate, maybe we can stop stretching for facile explanations. Or maybe we’ll just need to cook up some new narratives.

You need to be logged in to comment. Login or Subscribe
ScottBehson
Facing Romo andhis sick slider, which always looks like a strike then dives out of the strike zone, wouldn't taking every slider be a wise course of action?

Also, I get your point about the Tigers hitting compared to the Yankees, but the Tigers have actually made contact, worked counts, and hit several line-drive outs. The yanks basically swung for the fences on pitches way out of the zone, striking out at a crazy rate.
Reply to ScottBehson
harderj
Would make sense, but Sergio Romo is one of a very few pitchers who throw what Giants announcers Mike Krukow, Duane Kuiper, and Jon Miller have called a "no-dot" slider.

Batters with adequate eyesight typically see a red dot on a slider coming in, allowing them pitch recognition. With Romo they can't use that key.

I recall mention of one other reliever this year who throws one (can't remember who), but that's it. It's kind of like Mariano Rivera's cutter in the sense that over-reliance doesn't seem to matter (except maybe to Romo's elbow over time).

Romo claims to have learned the pitch from his father (Vincente Romo) as a teenager. Seems to be working for him.

He now has a lower career ERA and WHIP than Mariano (who of course has been doing it much longer).
Reply to harderj
bornyank1
I think that might be true of the Yankees' first two ALCS games. I thought their approach improved in the last two, for all the good it did them.
Reply to bornyank1
harderj
Game two also set a record low for a game two, though it was 3% higher than game one.

This is looking like the least-watched World Series ever (in the national broadcast era).

Would St. Louis-Detroit have been even lower?

Or are people finally fed up with 11:30 finish times on the East Coast (or with Tim McCarver)?
Reply to harderj
HTSLLC
Agreed about McCarver. Why is he still in the booth?
Reply to HTSLLC
surfdent48
Also agree about McCarver