Game One of the World Series features a lopsided pitching matchup. Justin Verlander is a superior pitcher to Barry Zito by every measure imaginable. So how do you sell this as an intriguing matchup? The FOX broadcast will probably focus on what Verlander and Zito have in common—the Cy Young. Zito won the award in 2002, his second full season in the majors, and Verlander took his home last winter.

But it’s not what Verlander and Zito have in common that could make this entertaining; rather, it’s what separates them.

Arsenal balance
Baseball commentary deals in clichés and generalities a lot. Pitting Verlander against Zito invites all sorts of cookie-cutter labels. Bet your bottom dollar, if Zito outclasses Verlander in Game One, that someone somewhere will write a piece about the guileful southpaw who outwitted the hard-throwing nutcase. Some generalities about this matchup are correct, like the assumption that Zito must mix and match while Verlander can ride his fastball if he chooses.

Curveball usage
Keep clicking around Brooks Baseball and you’ll notice Zito and Verlander throw a similar amount of curveballs. The two pitches share little in common beyond the classification. Zito throws a slow, low-70s, looping deuce while Verlander tosses a low-80s power breaker. The physical differences are evident from watching the two men pitch. What might not be as obvious is the difference in application. Zito treats his curveball as a utility pitch, using it whenever he feels it necessary. Verlander’s curve is deployed as a knockout offering.

The image below attempts to convey the differences. I took note, during each of the players’ postseason starts, of how long it took each pitcher to throw his first first-pitch curve of the game. The number inside the circle is the pitch count; Zito is represented by the orange circles: 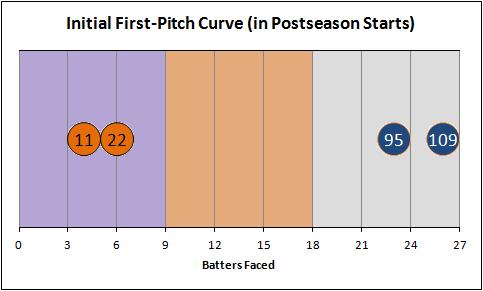 Fastball location
One last Brooks Baseball-inspired note: Verlander’s average changeup was roughly 2 mph faster than Zito’s average fastball this season. If I asked which of these pitchers threw up in the zone more often, you would say Verlander. After all, Verlander throws harder, so he has additional margin for error that Zito does not. Plus Baseball America’s 2006 handbook details how Verlander used to struggle to keep his pitches down because of a stiff front leg. Verlander. No-brainer. Except it’s Zito.

A soft-tossing lefty’s ability to live up in the zone goes against conventional wisdom, but Zito has located his fastballs in the middle of the strike zone or higher on 72 percent of his throws. Verlander, meanwhile, is at 52 percent. Ken Arneson explained the why and the how of Zito’s high fastballs in a 2007 piece. Here’s what Arneson wrote about Zito’s fastball location:

Zito's fastball, a four-seamer, is usually only 86-88mph, although he can touch 90 on occasion. So he can't overpower anyone with it. However, he uses the threat of the curveball to trick the batter into swinging at a bad fastball.

You can't hit that pitch hard, if you hit it at all. It's too far off the plate to reach with the good part of the bat. Most hitters who make contact on that pitch hit the ball off the end of their bat, and the result is a weak popup to second base or right field.

Normally, a batter wouldn't even think about swinging at a pitch in that location, but because the curveball starts out with the same trajectory, Zito can often induce batters to chase there, where other pitchers can't.

In time, someone may write about where Verlander can induce swings that other pitchers cannot.

As it stands, Verlander and Zito are on opposite ends of what we know about pitching. As a study in contrasts, it should be entertaining, indeed.

You need to be logged in to comment. Login or Subscribe
tombores99
Great work, RJ. There is a ton of information hidden in the analysis of first-pitch tendencies of various pitchers, and checking out which guys are confident in a first-pitch "show me" curve is one of the highlights.

Also great notes on Zito. He has been throwing his fastball up in the zone his entire career, and the point about initial trajectory is right on. The tendency to rise above also helps the FB play up a tick on the effective velocity scale, as batters have to start the swing a little bit earlier in order to hit a pitch squarely that is up in the zone (or above). One of the funniest sights of the post-season has been batters taking late swings on 85-mph "fastballs."
Reply to tombores99