The following originally ran two years ago today. With two exceptions—the seventh word of the piece, and the section on the woman in the Marlins jersey who turned out to be a dude in a Marlins jersey, and who we now know much, much more about—it's just as true today, so we hope you'll enjoy it anew.

You will be spending the next two days with the AT&T crowd, so you might as well get to know who they are. While a stadium of 43,000 can hold countless types, the culture of the park can be pretty well summed up by just a few of them.

The young friends with varying degrees of interest in the outcome of the game.
Jason didn’t normally talk to himself, but he was too anxious to sit still or stay quiet. He just wanted to leave his apartment, to get to the park on time, to erupt at the first pitch. That would settle him. Until then, he was too anxious.

—but a knock at the door. “Finally!” he thought to himself. “Finally!” he started to say as he opened the door, but he stopped. “What the s*** Alex. What are you even wearing?”

Oh no. It was just the reaction Alex had feared. For weeks, when he was alone in his apartment, he had been wearing the hat, trying it out, practicing if you will, and stopping every time he passed a mirror to examine himself. He liked it. It looked good, right? He didn’t want to wear a baseball cap forever. He wanted to have a family, join the PTA. But he feared, always, this moment, when he took the hat out in public.

“I lost my other hat,” he mumbled. “My grandma gave me this. It’s the only thing I could find. Do you have an extra cap—”

—but a knock on the door. Jason opened it.

— and a knock at the door. Jason opened it.

What could they do, but sigh and get over it. "Let's do it! Game Seveeeeeeen!"

The errant high fivers
The best part of being in the crowd at AT&T Park is how communal it is. I haven't been to nearly every ballpark in America, but I've been to a few, and I've never been to one where strangers interacted with each other so much. (At Petco Park, you're not even allowed to stand up during an at-bat. You can't stand to cheer. If it is the ninth inning, and you want to cheer, and you stand up and applaud, somebody behind you will holler at you to sit down and a very nice usher will very nicely ask you to remain seated. At least that was my experience and that was one usher's experience.) At AT&T, during the postseason, though, fans form covalent bonds with anybody they can touch.

You can't underestimate how much our actions are influenced by millions of years of biological evolution. For instance, humans have an innate ability to detect snakes hiding in the grass. Even "very young children (can) very quickly detect the presence of of a snake from among a variety of non-threatening objects and creatures such as a caterpillar, flower or toad." That's not because you, as a human, are likely to bump into a snake in your lifetime, but because you, as a human, are very likely to bump into a snake throughout the course of human existence. High fives are much more fun than spotting snakes hiding in the grass, but they are not innate. High fives don't appear to have existed before 1977, perhaps later. We're still learning to high five, but Giants fans in particular are committed to practicing and practicing and practicing until our descendants, perhaps thousands of years from now, can high five for their survival. Until then—well, until then they remain a bunch of tech engineers.

(The guy in the orange hat in the top-left corner, by the way.)

The texters and Tweeters.
Ah but not everybody notices the people celebrating nearby. In San Francisco, many people prefer to "High Five" their Twitter followers by tweeting the exciting news: "At Gaints game. Crawford just made great catch I think. Didn't see it." The man at the bottom right,

but not just the man at the bottom right. Based on one random sample, conducted during Monday's game, 15 percent of fans are tweeting or texting at any given moment of play: 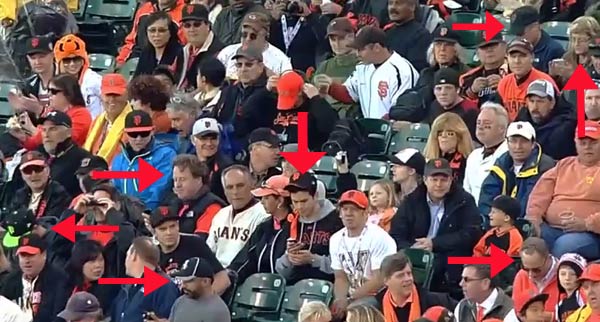 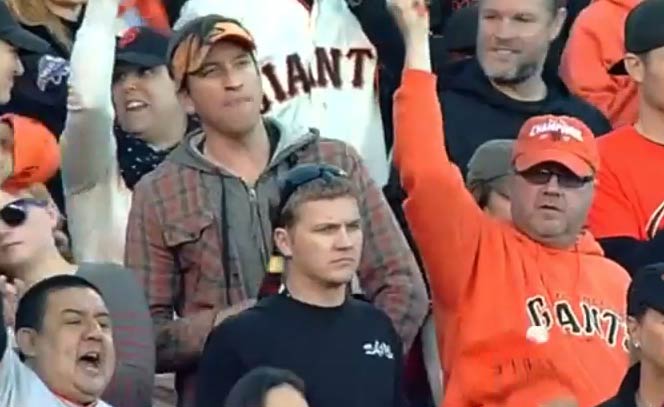 The real cool surfer is very stylish; his Giants-game outfit perfectly marries style with the subtlest shade of orange in the plaid. Judging by the label on his beer, I'm guessing he is drinking Endless Summer Light, which "tastes refreshing whether you like putting your toes to the nose or just in the sand." All around him are different levels of fan intensity: The man screaming at the bottom left, the man staring defiantly at the randomness before him, the man waving an orange towel. Surfer is also happy about the Giants' success, but he's very chill about it, as he ponders big thoughts about how infinite the universe is and what if you could surf through an asteroid shower.

The one man in each section wearing a suit, who bought a single and came straight to the game and doesn't sit down the entire time because he just loves the Giants more than you know:

Don't forget, San Francisco is also a thriving economic hub and a major player in the global economy. You might see a lot of old hippies, but most of the people in the crowd actually help produce the modern lifestyle that you love so much!

The eccentric Superfan
The eccentric doesn't drink beer, and she doesn't lean back in her seat. The eccentric is all business, and she probably loves the Giants more than any other person in the stands. She watches every pitch. She never seems to leave her seat, though she definitely gets up once, you know that, because sometime between the top and the bottom of one inning she has begun eating an ice cream cone. The eccentric eats ice cream because once, just once, she forgot to bring a snack, and she was starving, so she bought an ice cream cone; well, wouldn't you know, that night Jonathan Sanchez threw a no-hitter, so now she has to eat an ice cream cone every game, unless it's a day game. She wears her visor sideways because once she turned her visor sideways to block out the sun in her eyes, and just then Mike Felder hit a triple to drive in Trevor Wilson, so now she wears her visor sideways. She's not really eccentric in real life; she's a psychologist at a middle school, and if the kids think she's a little weird that's only because middle schoolers think every adult is a little weird. You have to be a little weird to let yourself get old, they figure. And also to let yourself wear a Miami Marlins shirt to Game Seven of the NLCS between the Giants and the Cardinals. 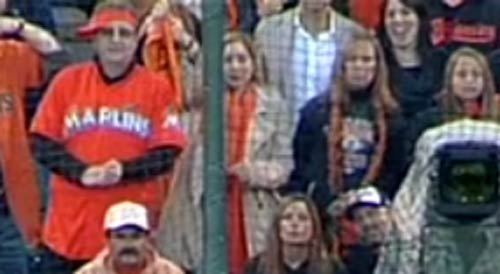 (See note at the bottom.) 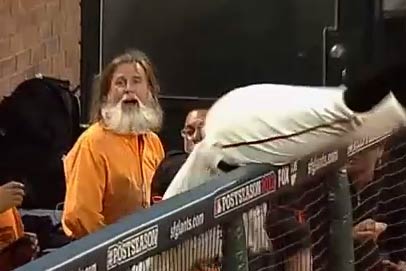 Nobody has better old hippies than AT&T.

That doesn't quite cover the whole crowd, but everybody else is a kid in a panda hat.

Note: I spent most of the game debating the gender of eccentric fan, but because of the camera distance and the sideways visor it was hard to be sure. Amy K. Nelson actually tracked him down! Him. He's a him. For the record.

Reply to frampton
therealn0d
Nicely spotted! That makes sense being that Anchor Steam is brewed in San Francisco.
Reply to therealn0d
beaunose
While not quite an Oakland Raider crowd AT&T Park features a lot more people in costume than any other baseball crowd. Game 6, if the series comes to that, will be in San Francisco on Halloween. Halloween is basically a five day drunken holiday in SF. Poor Jack Buck's head might explode.
Reply to beaunose
Dodger300
Ummmm, you mean Joe Buck, maybe?
Reply to Dodger300
greendrummer
as an A's die hard, we spoof and ridicule these mules at every chance, 15% texting seems like a generously low estimate, and wait till the ball gets hit in the air and they start cheering like Bonds just ripped one....
you too will learn to laugh at these fools
Reply to greendrummer
mattidell
Ha! Wait until Sam eventually gives the A's fans the treatment. It might not be all that different. Maybe take out the suits, add some snuck-in booze and herb, and add in some people who were just passing by on the BART when they were offered five dollar tickets on the train.

I agree, 15% is too low.
Reply to mattidell
sdinsmor
You can laugh at us "fools" all you want. We do more than laugh at you A's fans.
Reply to sdinsmor
danmckay
I find your work amusing. Very amusing.
Reply to danmckay
eighteen
Here's some more of the interesting people-watching available in San Fran.

Reply to eighteen
alangreene
Over 50% of the crowd will be mostly trendy bandwagonners, waiting to be seen. They did not notice the Giants until about September of '10, ignored them after June of last year and are back.

Much of the rest will be people who got free tickets from Oracle, Salesforce or whatever B2B technology company out there decided to snap them up.

World Series are better than Super Bowls for the corporate atmosphere, but there's going to be a whole lot of non-Die Hards there. It's cool to be a Giants fan right now.
Reply to alangreene
NJTomatoes
You guys really ought to consider having a "linkable story of the day" feature. I could then forward tasty nuggets like this to my cheap friends who are missing out on the best baseball site in the world. Their appetite would frequently become whetted and they might ultimately subscribe. Hmmm, wait a minute. BP is a great strategic advantage in my FBB leagues, so....never mind.
Reply to NJTomatoes
bornyank1
We almost always have at least one free article per day (anything without a Premium icon), and everything in our archives over a year old is free, so there should be plenty to whet their appetites. We appreciate it when readers help us spread the word.
Reply to bornyank1
lipitorkid
1. I'm not sure of the truthfulness of this article. I didn't see a single fan hurling a battery or eating garlic fries.

2. I knew that eccentric fan was a man right away, but I understand your confusion since there are no male Marlin fans.

3. I'm still trying to think of how to make a lesson plan for my English class out of this entire post. Awesome stuff.
Reply to lipitorkid
delatopia
Hurling batteries doesn't happen here. Now, beating up people in the parking lot or surrounding streets, that's another story (though still rare).
Reply to delatopia
buddha
Hey comment from two years ago, I'm a male Marlins fan! Always have been (both)!
Reply to buddha
Robotey
The post-post modernist irony of the Prospector/Hippie is that given the price of a ticket it's most likely he's just a dot-com hipster who dyed his beard grey.
Reply to Robotey