Answer, at the bottom, is terrible as always.

There was an episode of This American Life a couple weeks ago about a girl in New Zealand who was attacked by a shark. It’s really an amazing story and you should listen to it, whatever you think of shark attacks (I, for instance, am against them, but I think you would like this story even if you are in favor). The girl in the story asked the show’s producers not to give away her name, not because there’s anything embarrassing or indicting about her story, but because in New Zealand everybody knows her as the shark girl. She lives here now. She doesn’t want to be known as the girl who was attacked by a shark. She just wants to be known for being her.

You know Ryan Vogelsong’s story, and you probably know it in enough detail that there’s little hope of impressing you with it. Did you know he walked 5.9 batters per nine innings in Triple-A just one year before his amazing breakout in 2011? If you knew that, then there’s just no impressing you anymore. But still, that’s who Ryan Vogelsong is: He’s the guy who wasn’t very good, then went away for a long time, came back and was still terrible, somehow lucked into a shot and was way better than he ever had any business being. Bill Shaikin wrote wonderfully about this story in the LA Times Sunday, a piece about how the Angels (like everybody) let him get away. Here’s the key quote in the piece from the Angels director of player development:

Erin Andrews interviewed Vogelsong on the field: “God had a plan for me,” he said. “All the hard work, all the travel, he was setting me up for this game.” I’m listening to the Giants’ post-game show right now, and there’s a commercial featuring a quote by one of his teammates addressing Vogelsong: “…then with the Phillies you got released. Now you’re getting a chance to start in the postseason. Just go get it.” You got it. The story. That’s The Story.

We never have to totally retire that story, but it’s time to put it aside. Vogelsong has been good for two seasons now. What came before is secondary. The shark attack isn’t what defines him anymore. He’s just good. He’s just good, full stop.

In 19 postseason innings, he has 18 strikeouts, six walks, he hasn't allowed a home run and he has allowed three runs. In three starts, he has three of the four best starts by Giants pitchers this postseason.

I like The Story, too, but it matters that we get past this idea that Vogelsong is not to be believed. Two weeks ago, when we wrote our preview of the NLDS, we left Vogelsong out of the Giants rotation. We did that because it seemed most likely that Vogelsong would be left out of the Giants rotation. (“If I’m not in the rotation, hopefully I’m in the bullpen,” he said as the season wound down.) Vogelsong had a 6.75 ERA in his final 10 starts of the year, and Bruce Bochy could be forgiven for feeling the way we probably all felt, or at least feared: Poof. Vogey woke up.

But that feeling wasn’t about evidence; it was about The Story, and not quite fully believing it. Vogelsong had a 2.27 ERA before that stretch. He had finished fourth in the National League in ERA, and sixth in ERA+, the season before. Well, sure, his peripherals suggested regression, but if we’re most concerned with peripherals, here are some: 53 Ks, 14 walks, in 47 innings in those final 10 starts. A .402 BABIP. Too many home runs, but a FIP in the mid-3s. But it was really, really hard to believe in Vogelsong, because when were we ever supposed to start believing in Vogelsong? There was no day when we all could decide, okay, that’s it, that’s enough, he’s good. Vogelsong’s good now! It was just a gradual thing that happened, while we were telling The Story.

Let’s just call Sunday the day. From now on, Vogelsong is just good. 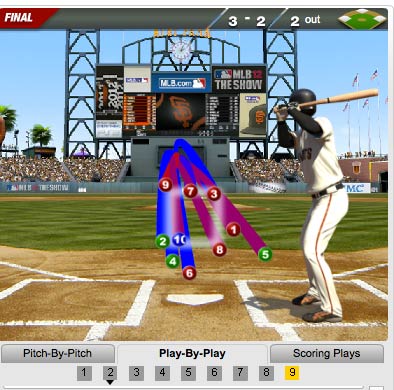 Tim McCarver dinged Carpenter for throwing a strike to Sandoval “with first base open,” and I’m of two minds about this. Yes, the 10th pitch of the at-bat was the most hittable pitch Sandoval saw. It was also a pretty great pitch, the sort of pitch you want to throw. Not only is it pretty close to unhittable, it’s down near two of the pitches that Sandoval actually took; maybe, just maybe, it would freeze him.

When you and I look at that graphic, we laugh at how far out of the zone Sandoval chases, and how he still managed to get a hit. When Sandoval looks at it, he laughs at how skinny they made him.

If I were a sportswriter in the 1919 World Series,I'd have a lot of plays marked with suspicious circles in this game right now…

If I were to get a Mt. Rushmore of Giants tattooed across my chest, I guess Scutaro has to be on there now. I'll update my notes.

Lohse was all over the place in Game 3. Matheny apparently worried about needing many innings from his pen tomorrow.

To clarify recent media speculation: Waino not available tonite. Will be an option in a Game 7.

You need to be logged in to comment. Login or Subscribe
bigdonut
"When you and I look at that graphic, we laugh at how far out of the zone Sandoval chases, and how he still managed to get a hit. When Sandoval looks at it, he laughs at how skinny they made him."

Lines like this make me laugh, spit up coffee, and want more.

Have to go with one of those. They're great. And I agree with the other poster about the Sandoval line. Hilarious!
Reply to sam19041
rweiler
More terrible than the headlines is listening Buck and McCarver talk about the importance of having a closer and how Romo has become one due to his supposedly new found confidence that he can do the job as opposed to, say, being assigned to do the job by his manager. Anybody that has heard Romo interviewed over the last couple of years could have told them that he has never lacked 'confidence' that he can get people out. The only thing that has really changed is that in the absence of Wilson, and after a couple of Casilla 9th inning meltdowns, Bochy has designated Romo the 9th inning guy
Reply to rweiler